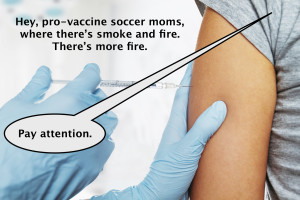 May 6, 2016 NoMoreFakeNews.com (To read about Jon’s mega-collection, Power Outside The Matrix, click here.)

“The bigger the lie, the bigger the truth it is concealing. The truth is what people are afraid to accept.” (The Underground, Jon Rappoport)

The censored film, Vaxxed  (trailer), has escaped the claws of the “protectors of all truth.” It has been showing to packed houses all over the country. It relates the specific crime of scientific fraud at the CDC. A whistleblower, William Thompson, confesses that he and his CDC colleagues lied and cheated and omitted vital data, in order to give the MMR vaccine a free pass and claim it had no connection to autism—when it did have a connection.

That’s the purpose and meaning and focus of this astonishing film.

But there is more. There are other whistleblowers shining a light on the MMR (mumps, measles, rubella) vaccine. Specifically, the mumps component of the vaccine and its ineffectiveness.

Their names are Stephen A. Krahling and Joan A. Wlochowski. They’re former virologists at Merck. They’re insiders. They’ve leveled devastating charges against the company, which manufactures the MMR vaccine and sells it to the federal government.

“…former Merck scientists [claim] that Merck ‘fraudulently misled the government and omitted, concealed, and adulterated material information regarding the efficacy of its mumps vaccine in violation of the FCA [False Claims Act].’”

“According to the whistleblowers’ court documents, Merck’s misconduct was far-ranging: It ‘failed to disclose that its mumps vaccine was not as effective as Merck represented, (ii) used improper testing techniques, (iii) manipulated testing methodology, (iv) abandoned undesirable test results, (v) falsified test data, (vi) failed to adequately investigate and report the diminished efficacy of its mumps vaccine, (vii) falsely verified that each manufacturing lot of mumps vaccine would be as effective as identified in the labeling, (viii) falsely certified the accuracy of applications filed with the FDA, (ix) falsely certified compliance with the terms of the CDC purchase [of the MMR vaccine] contract, (x) engaged in the fraud and concealment described herein for the purpose of illegally monopolizing the U.S. market for mumps vaccine, (xi) mislabeled, misbranded, and falsely certified its mumps vaccine, and (xii) engaged in the other acts described herein to conceal the diminished efficacy of the vaccine the government was purchasing.’”

“These fraudulent activities, say the whistleblowers, were designed to produce test results that would meet the FDA’s requirement that the mumps vaccine was 95 per cent effective. To the whistleblowers’ delight, the judge dismissed Merck’s objections to the case proceeding, finding the whistleblowers had plausible grounds on all of the claims lodged against Merck.”

The whistleblowers’ charges include detailed specifics on how Merck cheated, in order to produce the false conclusion that the mumps component of the MMR vaccine was 95% effective. For example, Merck placed rabbit antibodies into blood samples—pretending these were human antibodies signaling a high level of immune response to the vaccine.

It should be noted that this far-reaching charge of fraud covers years during which Dr. Julie Gerberding was the president of Merck vaccines.

Why does this matter? Because Gerberding, before landing her high-paying job at Merck, was the head of the US Centers for Disease Control.

And while she was the head of the CDC, in 2004, William Thompson, the CDC whistleblower revealed in Vaxxed, warned Gerberding that he had “sensitive” data about the MMR vaccine, and these data constituted a problem for the CDC.

Thompson was obviously talking about the vaccine’s link to autism. Gerberding ignored Thompson.

You could say she doubled down. After leaving the CDC, she became president of vaccines for Merck, the company that manufactures the MMR vacccine, holds a monopoly on it, and sells it to the CDC.

—So when scientists, pundits, government officials, and other “experts” ponder how, at Harvard, a recent mumps outbreak could have affected previously vaccinated students, they’re faking it.

Even within the (false) conventional view of how vaccines work and what they do, the mumps component of the MMR is a dud. It’s been an open secret for a long time.

And now two Merck whistleblowers are lowering the boom in court.

The US Justice Department wants nothing to do with this case. Neither does the US Congress. Inside the federal government, there are blind eyes everywhere.

If the government actively pursued the case, among other revelations, the public would witness Dr. Julie Gerberding, former head of the CDC, president of Merck vaccines, being raked over the coals on the witness stand.

That must never happen.

If you think, while the case drags on, there is any effort to curtail the use of the vaccine, or investigate it, think again. The judge in the case has set a timetable which places the start of courtroom proceedings in…