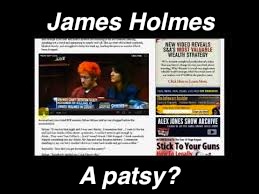 On movie and TV screens across the world, every day, we see played out the drama of hero versus villain, good versus evil.

In real life, people who can’t look below the surface of events feel a need to see evil incarnate somewhere, anywhere, without discernment, to point the finger at one person, to identify him, to know what he has done, to accuse him, to make him pay.

In this Virtual Age, if a group of men were planning such an event to satisfy the appetites of the crowd, the mob, the mass, why not twist together the real and the fictional, for maximum impact?

Why not merge the hero-villain myth of movies with a real villain who causes horrific death DURING a movie, as he personifies the fictional nemesis of the fictional hero?

To accomplish this insane and perverted scenario, adjustments would have to made.  Holmes has little or no experience with guns.  He knows nothing about explosives.  He isn’t a professional in any sense of the word.  He has never committed a crime before.  If he has any qualification for the heinous operation, it is his vulnerability.  He is adrift in his life.  Never as brilliant a student as others thought him to be, he is failing in graduate school.  He has no job and no prospects.  What began as a potential career has dissolved.  His interest in arcane aspects of neuroscience (temporal delusion—the possibility of changing the past), once a fascinating field of inquiry for him, now only contributes to his increasingly shaky grip on reality.

Would covert-op planners select him as an assassin or a patsy?

Is he the killer or the sacrifice?

The planning is rather simple and direct.  The actual killer(s) will enter the theater, while Holmes, who is drugged into a stupor and is sitting in his car, waits in the parking lot of the theater, among weapons and other gear that matches the killers’.  Once the killers leave the theater, they’ll deposit their guns with him, as he lies in a semi-conscious blurred state.  They’ll deposit gun residue on his body.

When the police find Holmes in his car (not at the the theater exit or outside the car), he will surrender.  Perhaps, under prior hypnosis, he was instructed to say his apartment is wired with explosives.  Of course, the hired professionals did that intricate construction.  And perhaps Holmes never tells the police about his apartment and explosives, and this information has really come from a tip.

Since the killer(s) was covered up from head to toe in the theater, there are no witnesses who can say Holmes wasn’t there.

Once upon a time, Lee Harvey Oswald was the patsy, the man who couldn’t have killed John Kennedy from the angle of his supposed perch in the Dallas Book Depository—additional evidence provided by the Zapruder film and the conclusion of the 1976 House Select Committee on Assassinations.

Once upon a time, Sirhan Sirhan was the patsy, who couldn’t have killed Robert Kennedy in the kitchen of the Los Angeles Ambassador Hotel, because he was standing in front of RFK and the bullets entered Kennedy’s body from behind.  As with Holmes, a damning notebook was found.  As with Holmes, there was a claim of amnesia.

Once upon a time, James Earl Ray was the patsy, who couldn’t have killed Martin Luther King at the Lorraine Motel in Memphis.  There are several reasons, among which is the fact that the bullet that killed King did not match bullets test-fired from Ray’s rifle.

In each of these cases, the public and media outcry was enormous, and it was directed against the accused killer.  The idea that Oswald, Sirhan, or Ray was innocent was considered preposterous and morbid.  A hero had died; therefore the man arrested for the crime had to be guilty.  The public demanded justice, and it could only be served by convicting the accused, in order to sustain the noble memory of the victim and demonstrate that good had conquered evil.

As for those who implicitly believe law enforcement “always catches their man” and witnesses who depart from the party line lie or can’t see straight, one need only look, for starters, at the FBI’s infamous COINTELPRO program, the history of CIA interventions in other nations, and numerous American police scandals to realize that, in many cases, the deck is stacked.

There is easily as much reason to believe that op planners were behind the Aurora murders, with Holmes as the patsy, as there is to believe Holmes planned and executed the whole thing himself.

And for symbology, you have the Dark Knight rising with Aurora, the goddess of dawn; the masked hero, Batman, and the masked murderer in the theater; The Joker who believes all existence is destruction, and destruction by the Joker in the theater; the forces of light and darkness—in other words, all the insanity of collective archetypes playing out on both the screen and in the theater.

The bad guy has been captured, the police have their story, the public buys in.

In John Marks’ famous book, Search for the Manchurian Candidate, one of three books that broke open the CIA’s MKULTRA mind-control program, Marks interviews “a CIA veteran” about the ability of hypnosis to produce a programmed assassin.  The veteran doesn’t believe hypnosis can accomplish that.  But, Marks writes:

“The veteran admits that none of the arguments he uses against a conditioned assassin would apply to a programmed ‘patsy’ whom a hypnotist could walk through a series of seemingly unrelated events…The purpose of this exercise is to leave a circumstantial trail that will make the authorities think the patsy committed a particular crime. The weakness might well be that the [patsy’s] amnesia would not hold up under police interrogation, but that would not matter if the police did not believe his preposterous story about being hypnotized or if he were shot resisting arrest. Hypnosis expert Milton Kline says he could create a patsy in three months—an assassin would take him six.”

If Holmes persists in his claim that he can’t remember the events of the night of the Batman massacre (which claim might be true), the court will order a psychiatric examination, to determine if Holmes is competent to participate in his own defense and stand trial.

If Holmes is ruled incompetent, then no trial can be held.  Instead, he’ll be placed in a mental institution for treatment.  Under Colorado law, he can’t be held in an institution for longer than he would serve in prison if found guilty of the charges against him.  Well, those charges would bring a sentence of life in prison or execution.

However, if Holmes’ institutional psychiatrists decided there was no prospect for Holmes to regain his competence in the foreseeable future, he could actually be released.  In this case, I’d predict the state of Colorado would find reasons to keep him in a mental institution for the rest of his life.  He would become a John Hinckley, who has been incarcerated in St. Elizabeths Hospital since 1982, after trying to assassinate Ronald Reagan.

Incarceration of this kind, for James Holmes, would provide  opportunities for drug treatment that would render him into a permanent state of brain-damaged confusion.  The so-called neuroleptic drugs routinely cause motor brain damage.

Thus would a patsy be neutralized.

If Holmes is ruled, at some point, competent to stand trial and tries to say he was drugged, hypnotized, and set up, he’ll either be sent to a mental hospital for his “insane ideation,” or the trial will proceed and he’ll be found guilty. Again, neutralization.

There is also the possibility of suicide, or suicide by killing.

And the public will move on to the next spectacle of good versus evil, never noticing that the advancing Collectivism of the State, in an embrace with the Mega-Corporate Kingdom, is the overarching evil that is being concealed.

2 thoughts on ““WAS JAMES HOLMES SET UP TO BE THE AURORA PATSY?” By Jon Rappoport”