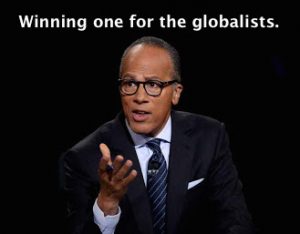 September 27, 2016 (To read about Jon’s mega-collection, Exit From The Matrix, click here.)

As I wrote before the debate yesterday, it’s all about the staging.

I won’t go over everything NBC moderator Lester Holt did to tilt the debate to Hillary. Others are covering his performance. I’ll point out one vital thing. It happened right at the beginning.

Holt framed the debate by stating that the US economy, particularly employment, has recovered well since the 2007-8 meltdown. Of course, he lied. When you factor in how many people now have low-paying jobs who formerly had good jobs; and when you also consider that people who give up trying to find jobs are eventually no longer listed as unemployed, you get the true picture: the US economy hasn’t recovered. Not by a long shot.

Understandably, Trump was focused, at the moment when Holt lied, on Hillary and the audience in the hall. He was blindsided. From the get-go, he should have pinned Holt and denied Holt’s “facts.” He should have exposed Holt as an errant “fact-checker” and put him back on his heels. That could have changed the whole tone of the evening. Holt’s stone-faced “objective” calm would have been broken. He would have been under the gun.

The tight debate format does not suit Trump. The whole set-up goes against his style. Brief statements, the back-and-forth between candidates, the moderator questions and interruptions—it plays against his energy and rhythms.

Within that structure, Trump tended to talk to Hillary and Holt—instead of directly to the American people.

That created problems for him throughout the evening.

Trump’s whole campaign has been based on him going out there, from city to city, talking to large crowds.

In the debates, he has to maintain that position. He’s still speaking directly to the American people, even though he’s in a small hall, with network coverage, with Hillary standing near him, with a media moderator running the show. He has to make that clear—he’s speaking to The People.

The debate set-up is 2 against 1. Holt (or any network moderator) is the anchor. Hillary, with her polished delivery (she’s spoken these lines hundreds of times), functions, in a sense, as another anchor. That leaves Trump as the “disgruntled guest” on the show, trying to make his points and go against the grain.

An old word describes what Trump should be doing: “oratory.” It’s what elevates a speaker beyond his immediate circumstances and environment, imparting the sense that he’s talking to “everybody.” Forget Hillary. Forget Holt. Forget the people in the hall. Many of them are political pros. Talk to America.

Trump is supposed to be a populist. He’s supposed to be speaking to, and on behalf of, the citizens who feel they have no voice. If that’s true, he can’t leave them out during the debates.

For her part, Hillary was sheer empty perfection. She used all the buzzwords and generalities, while maintaining a cheery and bright attitude. She delivered exactly what she’s been delivering for years and years, straight from memory.

It doesn’t matter what the debate after-polls show. As this campaign moves to its final moments, her anchor-like gloss is going to make serious inroads on Trump, if he continues to be the disgruntled guest on the show.