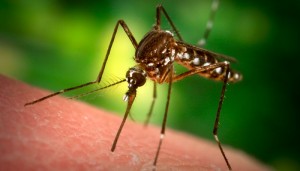 Evidence? Who cares about evidence? You give people the mere announcement of an outbreak plus a virus and they’ll cling to it as if it’s a long-lost relative who’s about to die and leave them a billion dollars.

In two previous articles, I laid to rest the notion that anyone has proved there is an epidemic of microcephaly or that the Zika virus causes microcephaly. Those articles are: Zika freaka: the other shoe drops: lying about case numbers and Zika: biggest news service in America absolutely clueless.

Bottom line: Brazilian researchers have only been able to confirm, so far, 270 cases of microcephaly, not 4000 as originally trumpeted. And of those 270 cases, only six, that’s six, were found to have any trace of the Zika virus. If that’s an epidemic, a floor lamp can jump up and sing I’ve Got You Under My Skin in Mandarin Chinese.

But now the Centers for Disease Control has upped the ante—a few cases of “Zika-virus transmission” through, wait for it, sex, have been discovered.  The tiny Zika terrorist is riding in semen. OMG. OMG.

Put this together with biting bloodsucking mosquitoes carrying Zika and you have a blockbuster boffo box office movie. Put it up on IMAX. Who will they pick to do the Voice of God narration?

Let’s see. Transmission of a virus through sex. The virus hasn’t been shown to cause anything. Conclusion? No fear. But that doesn’t sell. That doesn’t titillate. So forget about evidence or proof. Just market the damn movie.

Here are the old standby memes: “Spread. Transmission of the virus. Infected. Carrier. New cases with the virus.”

What we’re left with, at this point, are these garbage terms the public swallows without inspection. That goes for news reporters as well, and many, many scientists. These key phrases are intended to create caution and fear, as authorities map Zika journeys from city to city and country to country.

So I’ll quickly break down the memes and reveal them for the slugs they are.

“Spread.” For a virus that has existed for who knows how long (it was first discovered in 1947), the notion of spread is moronic. Of course it spreads. It walks down the street, it takes the subway, it hails a cab, it jumps on a plane, it crawls through the woods, it rides via semen, it stands up on stage and runs a quiz show. It’s already been around the world a few thousand times and it’s already in people’s bodies from Tierra del Fuego to Nome. So? What do we have?  A virus which hasn’t been shown to cause microcephaly or any serious illness is everywhere. Big deal. There are millions of different viruses. Most of them do nothing. They hang out, once they’re in a place they like, and they watch The Young and the Restless. They spread, but basically they’re already there.

“Transmission of the virus.” Ditto. I just explained that. The answer is yes and so what.

“Carrier.” Ditto again. You might have Zika. And you, too. So what?

“Infected.” This word suggests a person has a virus and the virus is causing a problem. Inflammation, swelling, fever. Even accepting the traditional literature on Zika, all we see are minor symptoms and brief discomfort. It wasn’t until very recently that anyone suggested Zika is causing microcephaly. And, as I’ve shown, this notion was premature, without supporting evidence. There was no reason for the press explosion, for suggestions of an epidemic, for government and health agency pronouncements about a worldwide emergency.

As an investigator, you have to go back to the beginning. Whenever an announcement of an “outbreak” is made, and a cause is trumpeted, you have to find out how many cases of the disease actually exist. Is it really an outbreak? And then you have to look for evidence that the presumed cause is really causing anything. If you don’t look deeply into those questions, you’ll climb on board the train that has been prepared for you and take the ride. You may then come up with ideas about how the cause was “secretly introduced,” but if the purported cause isn’t the cause, and if there isn’t an epidemic, what do you have?

In the case of Brazil, genetically engineered mosquitoes and the Tdap vaccine, for example, are important factors to explore, because they can certainly have destructive effects on health. Yes. But to use those factors to explain “what’s really going on with the epidemic and the Zika virus”—you’re still riding on the basic propaganda train where there is no actual evidence of an epidemic or a harmful virus.

Unfortunately, most people are disappointed when an exotic piece of charlatan dazzle turns out to be a dud. They would rather believe, instead of experiencing the feeling of being left with nothing.

They would rather go to the movies and watch flying little demons sucking blood from unsuspecting humans and injecting those humans with invisible microscopic sub-demons and, in the wake of that, sex turns out to be a catastrophe of global proportions. That’s a two-hour jolt of adrenaline.

That’s worth the price of the ticket.

Let me put it to you this way. If you had a few billion bucks and straight-line control of fawning media, you could concoct the most ridiculous and absurd story of fear anyone ever heard of, and the networks would blast it out as absolute fact. And people all over the world would believe it and tremble. And then, when that story was absolutely exposed as pure invention, there would still be many people who would say: “But maybe the story is true. Maybe it is. Maybe there really are green-eyed people born with a special genetic defect that makes them travel to Tahiti and shovel snow 365 days a year on the beaches, and maybe they can pass this defect along to the locals and then the defect is transmitted around the world and people will shovel imaginary snow 24/7, day after day, until they weaken and fall down and go into a coma. Yes, it could be. It would be unwise of me to reject the possibility, because if it’s true…”

That’s how fear is sold and stays sold, no matter what.

That’s what the sleazy hustlers put on the movie posters, my friends, under the pictures of the flying demons: