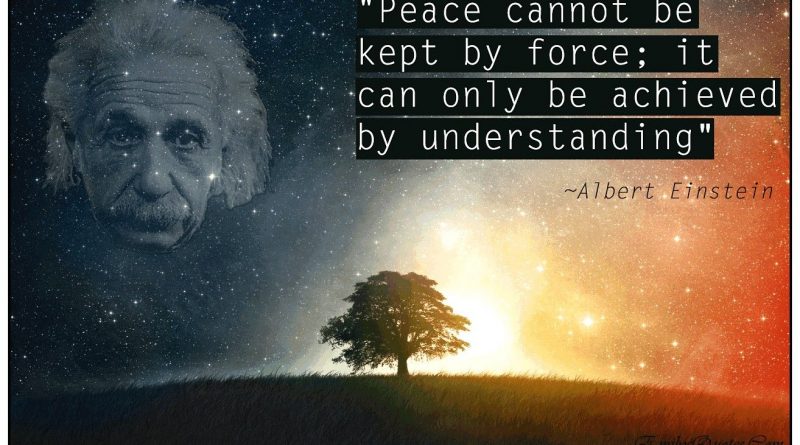 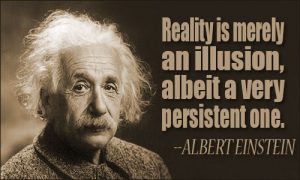 It was a strange journey into the astral realm to find Albert Einstein.

I slipped through gated communities heavily guarded by troops protecting dead Presidents.  I skirted alleys where wannabe demons claiming they were Satan’s reps were selling potions made from powdered skulls of English kings.  I ran through mannequin mansions where trainings for future shoppers were in progress.  Apparently, some souls come to Earth to be born as aggressive entitled consumers.  Who knew?

Finally, in a little valley, I spotted a cabin, and there on the porch, sitting in a rocker, smoking a pipe and reading The Bourne Ultimatum, was Dr. Einstein.

He was wearing an old sports jacket with leather patches on the elbows, jeans, and furry slippers.

I wanted to talk with the great man because I’d read a 1929 Saturday Evening Post interview with him.  He’d said:

“I am a determinist. As such, I do not believe in free will…Practically, I am, nevertheless, compelled to act as if freedom of the will existed. If I wish to live in a civilized community, I must act as if man is a responsible being.”

Dr, Einstein went inside and brought out two bottles of cold beer and we began our conversation:

Q:  Sir, would you say that the underlying nature of physical reality is atomic?

A:  If you’re asking me whether atoms and smaller particles exist everywhere in the universe, then of course, yes.

Q:  And are you satisfied that, wherever they are found, they are the same? They exhibit a uniformity?

Q:  Regardless of location.

Q:  So, for example, if we consider the make-up of the brain, those atoms are no different in kind from atoms wherever in the universe they are found.

A:  That’s true.  The brain is composed entirely of these tiny particles. And the particles, everywhere in the universe, without exception, flow and interact and collide without any exertion of free will. It’s an unending stream of cause and effect.

Q:  And when you think to yourself, “I’ll get breakfast now,” what is that?

A:  Ultimately, it is the outcome of particles in motion.

Q:  You were compelled to have that thought.

A:  As odd as that may seem, yes. Of course, we tell ourselves stories to present ourselves with a different version of reality, but those stories are social or cultural constructs.

Q:  And those “stories” we tell ourselves—they aren’t freely chosen rationalizations, either. We have no choice about that.

Q:  So there is nothing in the human brain that allows us the possibility of free will.

Q:  And as we are sitting here right now, sir, looking at each other, sitting and talking, this whole conversation is spooling out in the way that it must. Every word. Neither you nor I is really choosing what we say.

A:  I may not like it, but yes, it’s deterministic destiny. The particles flow.

Q:  When you pause to consider a question I ask you…even that act of considering is mandated by the motion of atomic and sub-atomic particles. What appears to be you deciding how to give me an answer…that is a delusion.

A:  The act of considering?  Why, yes, that, too, would have to be determined.  It’s not free.  There really is no choice involved.

Q:  And the outcome of this conversation, whatever points we may or may not agree upon, and the issues we may settle here, about this subject of free will versus determinism…they don’t matter at all, because, when you boil it down, the entire conversation was determined by our thoughts, which are nothing more than atomic and sub-atomic particles in motion—and that motion flows according to laws, none of which have anything to do with human choice.

A:  The entire flow of reality, so to speak, proceeds according to determined sets of laws.  Yes.

A:  Most certainly we are.

Q:  The earnestness with which we might try to settle this issue, our feelings, our thoughts, our striving—that is irrelevant. It’s window dressing. This conversation actually cannot go in different possible directions. It can only go in one direction.

A: That would ultimately have to be so.

Q:  Now, are atoms and their components, and any other tiny particles in the universe…are any of them conscious?

A:  Of course not.  The particles themselves are not conscious.

Q:  Some scientists speculate they are.

A:  Some people speculate that the moon can be sliced and served on a plate with fruit.

Q:  What do you think “conscious” means?

A:  It means we participate in life. We take action. We converse. We gain knowledge.

Q:  Any of the so-called faculties we possess—are they ultimately anything more than particles in motion?

A:  Well, no, they aren’t. Because everything is particles in motion. What else could be happening in this universe?  Nothing.

Q:  All right. I’d like to consider the word “understanding.”

A: The proof that it’s real, if you will, is that we are having this conversation.  It makes sense to us.

Q:  To change the focus just a bit, how can what you and I are saying have any meaning?

Q:  Again, I have to point out that, in a universe with no free will, we only have particles in motion. That’s all. That’s all we are. So where does “meaning” come from?

A:  “We understand language” is a true proposition.

Q:  Then I suggest you’ve tangled yourself in a contradiction. In the universe you depict, there would be no room for understanding.  Or meaning.   There would be nowhere for it to come from.  Unless particles understand.  Do they?

Q:  Then where do “understanding” and “meaning” come from?

Q:  Furthermore, sir, if we accept your depiction of a universe of particles, then there is no basis for this conversation at all. We don’t understand each other. How could we?

A:  But we do understand each other.

Q:  And therefore, your philosophic materialism (no free will, only particles in motion) must have a flaw.

Q:  Our existence contains more than particles in motion.

Q:  Would you grant that whatever it is, it is non-material?

Q:  Then that understanding is coming from something other than particles in motion. Without this non-material quality, you and I would be gibbering in the dark.

A:  You’re saying that, if all the particles in the universe, including those that make up the brain, possess no consciousness, no understanding, no comprehension of meaning, no freedom, then how can they give birth to understanding and freedom. There must be another factor, and it would have to be non-material.

Q:  Yes. That’s what I’m saying.  And I think you have to admit your view of determinism and particles in motion—that picture of the universe—leads to several absurdities.

A:  Well…perhaps I’m forced to consider it. Otherwise, we can’t sit here and understand each other.

Q:  You and I do understand each other.

A:  I hadn’t thought it through this way before, but if there is nothing inherent in particles that gives rise to understanding and meaning, then everything is gibberish. Except it isn’t gibberish. Yes, I seem to see a contradiction.  Interesting.

A:  For example, freedom. I suppose so.

Q:  And the drive to eliminate freedom in the world…is more than just the attempt to substitute one automatic reflex for another.

Q:  Scientists would be absolutely furious about the idea that, despite all their maneuvering, the most essential aspects of human life are beyond the scope of what they, the scientists, are “in charge of.”

A:  It would be a naked challenge to the power of science.

Einstein puffed on his pipe and looked out over the valley.  He took a sip of his beer.  After a minute, he said, “Let me see if I can summarize this, because it’s really rather startling.  The universe is nothing but particles.  All those particles follow laws of motion.  They aren’t free.  The brain is made up entirely of those same particles.  Therefore, there is nothing in the brain that would give us freedom.  These particles also don’t understand anything, they don’t make sense of anything, they don’t grasp the meaning of anything.  Since the brain, again, is made up of those particles, it has no power to allow us to grasp meaning or understand anything.  But we do understand.  We do grasp meaning.  Therefore, we are talking about qualities we possess which are not made out of energy.  These qualities are entirely non-material.”

“In that case,” he said, “there is…oddly enough, a completely different sphere or territory.  It’s non-material.  Therefore, it can’t be measured.  Therefore, it has no beginning or end.  If it did, it would be a material continuum and we could measure it.”

He pointed to the valley.

Then he laughed.  He looked at me.

I shook my head.  “No.  I would say you WERE dead until this moment.”

“Enough of this beer,” he said.  “I have some schnapps inside.  Let me get it.  Let’s drink the good stuff!  After all, I’m apparently Forever.  And so are you.  And so are we all.”