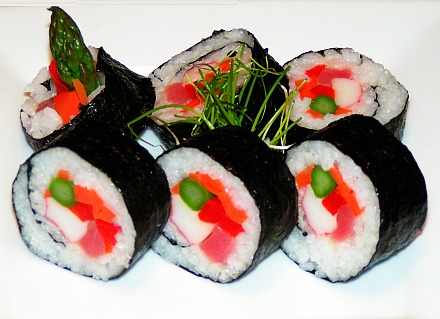 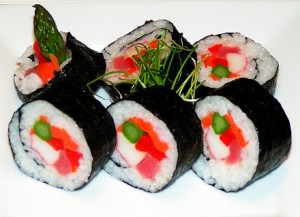 A new study on sushi has found that higher-end, restaurant-grade tuna sushi often has higher mercury levels than the cheaper tuna sushi found at local supermarkets. Researchers evaluated the DNA of various tuna species and came to the conclusion that varieties like blue fin akami and big eye tuna that typically have firmer flesh and are more visually appealing, are generally higher in mercury than other less expensive varieties.

According to the research, which appeared recently in the journal Biology Letters, the reason why higher-grade tuna often has higher mercury levels than other grades is because mercury tends to build up in muscle rather than in fat. This is why species like the blue fin toro, which is a fatty variety of tuna, typically has lower levels of mercury than bluefin akami and bigeye tuna, which are leaner varieties.

One exception was yellow fin tuna, which is lean but also low in mercury. Researchers believe that because this species is smaller than other varieties, eats less, and is generally killed at a younger age, it tends to accumulate less mercury than other varieties.

Overall, researchers observed that all species of tuna typically have high levels of mercury that, on average, exceed U.S. Environmental Protection Agency (EPA) thresholds for daily consumption, as well as maximum levels in Japan. Blue fin akami was one of the worst, testing at levels of 1 part per million (ppm).

The study is the first of its kind to accurately identify tuna species for testing purposes. Utilizing a unique DNA bar-coding technology that keeps track of species’ “fingerprints”, scientists were able to track tuna origins and identify those that would otherwise be unknown.

The team hopes that the findings will lead to better labeling practices in the sushi industry because, as it stands, some restaurants and many retailers do not even know precisely what varieties of sushi they are buying and selling. Other than the specific varieties previously mentioned, many simply purchase “sushi-grade” tuna and sell it to customers.

“So far, the U.S. does not require restaurants and merchants to clarify what species they are selling or trading, but species’ names and clearer labeling would allow consumers to exercise greater control over the level of mercury they imbibe,” explained Jacob Lowenstein, a genetic researcher affiliated with the American Museum of Natural History in New York, who worked on the study.