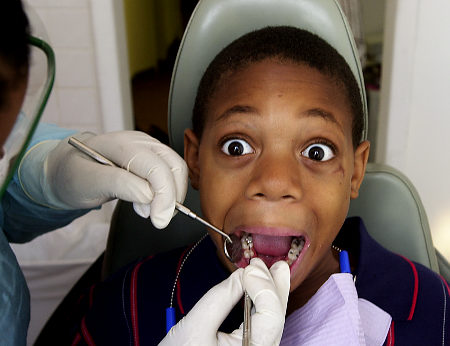 A new study out of Harvard Medical School has found that much of the white resin material used in dental fillings and sealants contains dangerous levels of bisphenol A (BPA). According to the analysis, enzymes in saliva can break down the tainted dental material and extract BPA from it, exposing children to unknown levels of the harmful chemical.

“The research that exists shows that upon contact with enzymes in the saliva…BPA derivatives break down to pure BPA,” explained Dr. Abby F. Fleisch, a pediatrician in the department of medicine at Children’s Hospital Boston and author of the study.

It is unclear from the study whether or not BPA continues to leach from dental work over the course of a person’s life, or only in the first few hours after the dental work has been completed. Researchers say that further analysis is necessary to test BPA absorption rates in relation to duration of exposure.

Most of the clear and white dental resins that have replaced the older mercury-laden metal compounds contain BPA. The U.S. Food and Drug Administration (FDA) has allegedly been encouraging the dental industry to phase out BPA from these newer dental products, but the agency has stopped short of banning it altogether. The FDA also continues to insist that low levels of exposure to BPA are harmless.

Recent research, however, suggests that even very low levels of BPA exposure can cause heart problems, sexual dysfunction, diabetes, cancer and other serious diseases. Studies show that BPA exposure is a serious health threat, especially in children.

But while denying that BPA exposure is problematic, the FDA has called on dental sealant and filling manufacturers to indicate BPA levels on products so dentists can choose those with less toxicity for use on children. The agency has also doled out roughly $30 million to fund BPA research.