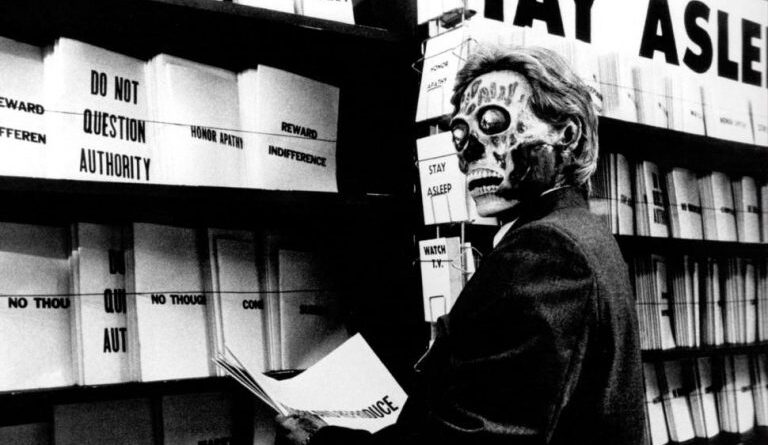 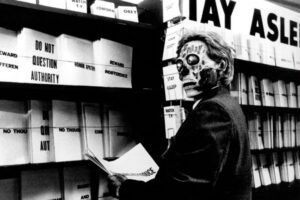 2020: The Year The System Showed Its Real Face As we grew up, nearly all of us were inundated with stories of our glorious national fathers, our beautiful democracies, and so on. And being young, we for the most part believed them. The system gave us our prosperity, our comfort, our medicine, our sense of importance. Soon enough we learned that the system was also stupid and perverse, but we found a way around that contradiction by blaming one segment of the system or another: The Blues or the Greens or the Red are the problem; it could not, must not, be that the system itself is the problem. Then came 2020, and the system revealed its true face. I suppose I should be fair and add that the system wasn’t always as rotten as it is now, but regardless, it wasn’t able to prevent the rot that overtook it. 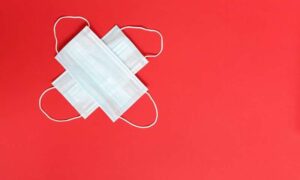 Trump’s COVID-19 diagnosis is not slowing virulent anti-mask movement on Facebook President Trump and the First Lady testing positive for COVID-19 has not slowed the anti-mask movement on Facebook. Despite growing evidence that face masks prevent the spread of the virus, dozens of public and private groups with hundreds, even thousands, of members are still urging people not to wear them. Among the anti-mask groups spreading on Facebook is “The Free Face Society,” which has 5,400 members and believes “no government or Tyrant should control our faces! A man cannot be free if he does not control his or her own face!” The cover photo for “Umask America!!” is a black mask that reads: “This mask is as useless as Joe Biden.” A sample post from one of its 6,200 members reads: “Well Target has the mask police out and they are handing out masks at the door. My husband and daughter sent me a picture saying courtesy of Target. Bunch of communist sheeple. I told my husband and daughter I would’ve just left. They are better sports than I am. This makes my blood boil!” 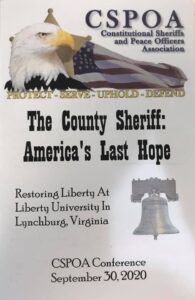 Resistance Grows Across the U.S. as Constitutional Sheriffs Meet in Virginia County sheriffs, police officers, pastors and attorneys fighting Covid19 lockdowns, business closings, mask mandates and unconstitutional gun laws met in Lynchburg, Virginia on September 30 to share their strategies. The constitutional training conference was sponsored by the Constitutional Sheriffs and Peace Officers Association (CSPOA) founded by former sheriff Richard Mack. US citizens were also invited to attend to learn more about how their elected sheriff is the first line of defense in their county who fight for the constitutional rights of their constituents and what they can do to preserve liberty. Many remember Mack successfully sued, along with six other sheriffs, the federal government on the grounds that the Brady bill violated the US Constitution and destroyed state sovereignty. As he puts it: “I sued the Clintons and lived to tell about it.”“I feel this is the most important meeting in America since the constitutional convention,” he said of the conference.“The people are the rightful masters of Congress, legislators and courts. It is our duty to fight those who would pervert it. There are so many traitors in our midst (for instance, the ‘covid dictator governors’) and we must make them irrelevant.” What can concerned citizens do? Take action in the countryside of America, county by county, one sheriff at a time. Work with chiefs of police, talk to health departments, and activate the churches. 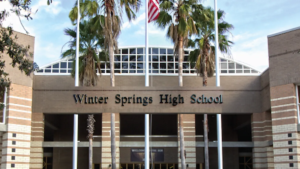 Teen arrested at Florida school after refusing to wear mask The lawyer for the family of a 16-year-old boy who was arrested last month after refusing to wear a mask at a central Florida high school called the incident “government abuse” of a teen suffering from panic attacks. The Winter Springs High School sophomore, whose name was redacted on the Sept. 17 report, was arrested after refusing to wear a mask and abide by other school rules, which violated a probation order that required him to maintain good behavior in school, the Orlando Sentinel reported. Jose Rivas, the family’s attorney, said the teenager’s prior record didn’t justify what he viewed as an uncalled-for action. “Should they be arresting a 16-year-old child knowing he already has a medical condition?” he said. In a statement, Rivas’ law firm called the arrest “government abuse” and added, “We will be seeking just and fair compensation for the illegal arrest … and the harm that this action caused him.” The boy’s mother told the newspaper her son has an anxiety disorder. She said he was arrested after going to the school office to ask for water because he was feeling panicky and was having trouble breathing in the mask. 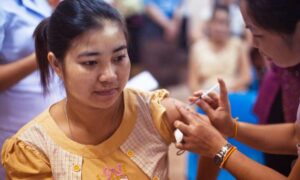 ‘No Jab, No Pay’ raises catch-up vaccination rates The national “No Jab, No Pay” policy has been associated with substantial catch-up vaccination activity in lower socio-economic status areas in Australia, according to research published today by the Medical Journal of Australia. Introduced on 1 January 2016, the policy extended the existing vaccination requirements for receiving federal family assistance payments by removing non-medical (conscientious objection) exemptions and tightening guidelines for medical exemption. Researchers from the University of Sydney and the National Center for Immunization Research and Surveillance (NCIRS), analyzed data from the Australian Immunization. They also examined catch-up vaccination rates for the second dose of measles–mumps–rubella vaccine (MMR2) in the latter two age groups, by Indigenous status and socio-economic status, and for the third dose of diphtheria–tetanus–pertussis vaccine (DTPa3) and the first dose of the measles-mumps-rubella vaccine (MMR1) in children aged five to less than seven years, before and after the introduction of ‘No Jab, No Pay’. 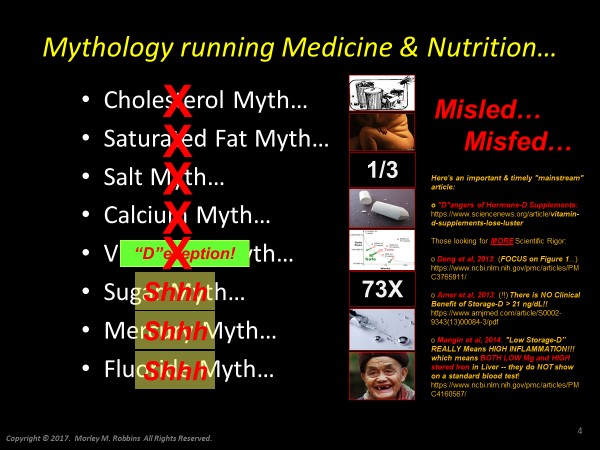 When was the LAST time the MSM/MSM (Medicine &amp; Media) were RIGHT about food, nutrition and our health?!? (The Masses are akin to battered spouses hoping, against hope, that THIS TIME the pundits &amp; their physicians will NOT ABUSE THEM, YET AGAIN… We were held hostage, for 65 YEARS, by arguments about “Cholesterol CAUSING Heart Disease,” only to learn that it’s OXIDIZED Lipids &amp; Sugars that TRIGGER Heart Events! (Ravnskov &amp; Diamond, et al, 2016; Cheng &amp; Li, 2007) The TIDAL WAVE of Correlational Research on Hormone-D “Leaps TALL Buildings” is PURE NARRATIVE, and is merely the “Son of Cholesterol – REDUX!” (MAG me with a spoon…)

From the standpoint of our near-term and long-term health, there is a MASSIVE difference between 3 dimensions of our Immune System that are confused and used interchangeably: (The abject SILENCE about these critical concepts should give EVERYONE with a pulse, a Pause…)
o Immunosuppression – Hormone-D SUPPRESSES NFkB…
van Etten and Mathieu, 2005 https://www.sciencedirect.com/science/article/abs/pii/S0960076005002268
o Immunometabolism – Bioavailable Copper creating ENERGY & clearing EXHAUST
T-Cell Study…
o Immunoregulation – REAL Vitamin A DOWNREGULATES NFkB & Regulates Cellular Immunity
Mawson, 2012 https://www.hindawi.com/journals/isrn/2013/246737/
Semba, 1998 https://onlinelibrary.wiley.com/doi/abs/10.1111/j.1753-4887.1998.tb01643.x
Know that there are HUNDREDS of Studies that assert the Immunoregulatory function of Retinol. NOT KNOWN BECAUSE NOT LOOKED FOR…

Vitamin-D is NOT the “Sunshine Vitamin!” FOR A FACT, it is an ANCIENT SUN FILTER that essentially puts cellular SUNSHADES, thereby PREVENTING Light into the CELL!!!!
o Article on Ancient role of Vit-D
https://www.semanticscholar.org/paper/Roles-for-the-heliodynamic-hormones%2C-all-trans-acid-Blazsek-Comisso/41ac8eb4c68d177ec7fd7adeeb1be0cba0dc04bd
o BLOG on a Vit-D# providing a TAN – This article ABSOLUTELY, & UNWITTINGLY confirms this Thesis…
http://www.hormonesmatter.com/vitamin-d3-tan/

Storage-D is SEASONAL, but ACTIVE-D is ALWAYS ON! This has taken a LOOOONG time to figure this nuance out… Everyone FREAKS about their LOW Storage-D over the Winter, right?… Well, as I came to realize that Hormone-D’s PRIMORDIAL FUNCTION is to RESTRICT LIGHT into the cells, it makes PERFECT SENSE that during the Summer – when there is LOTS OF SUNSHINE — the levels of Storage-D RISE to modulate the amount of Light INTO the Cells, and that during Winter – when there is LESS SUNSHINE – the body needs LESS “Foster Grants,” thereby allowing MORE Light INTO the Cells… Jack Kruse, DDS, MD waxes eloquently about the importance of Light for proper “polarization” of the cells’ functions… I let YOU listen to his pontification about this…

The point that Jim Stephenson, Jr, PhD (Founder of Secosteroid Hormone-D FB Group and Mortal ENEMY of Supplemental-D!…) emphasizes is that the REAL PLAYER in our Immune System is ACTIVE D (Calcitriol), working IN TANDEM with VDR<>RXR! Storage-D is a MEANINGLESS indicator of our Immune Status! The fact that NO ONE KNOWS their Active-D Status is comical beyond words!
Chesney, DeLuca et al, 1981, “Absence of Seasonal Variation in Serum Concentrations of 1,25-Dihydroxyvitamin D Despite a Rise in 25-Hydroxyvitamin D in Summer”
https://academic.oup.com/jcem/articleabstract/53/1/139/2677695?redirectedFrom=fulltext&fbclid=IwAR3LWNAm0b0kB-_gH4LRglcNRV_uDhrN2s7UmqNwpbIXZX_9BKzZdrsaZLA

RSB, This should make your skin crawl, Cornell University has announced that it has created ” Nanobots ” that are/ will be injected into the bloodstream of Human Guinea Pigs and of course they do nothing but good things to your body and will ” Greatly advance Modern Health Care in the World “( that was my quote) , the article say’s they will attack Cancer Cells and of course those pesky Viruses all through you got it ,Programing as they are microscopic little artificial Robots after all , yeah I feel better just knowing that they intend to actually use this on Human’s no doubt through ” Emergency Use Authorization ”!
James