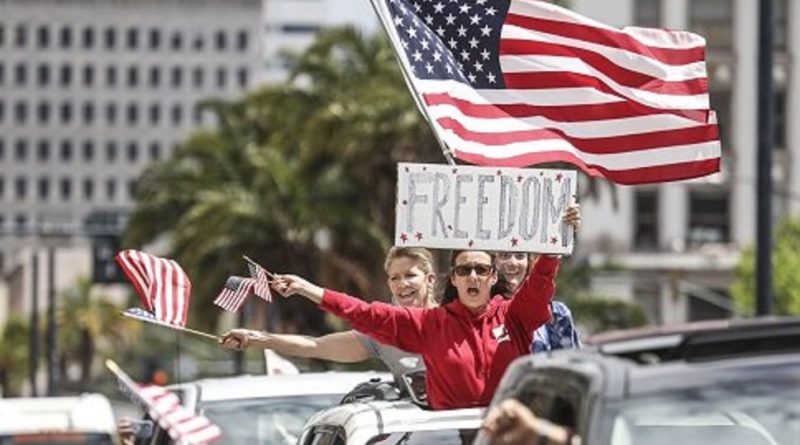 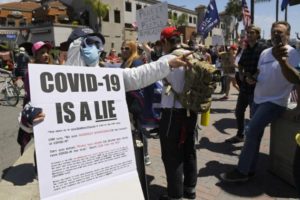 The anti-vaccine and anti-lockdown movements are converging, refusing to be ‘enslaved’ While most of the world hungers for a vaccine to put an end to the death and economic destruction wrought by COVID-19, some anti-vaccine groups are joining with anti-lockdown demonstrators to challenge restrictions aimed at protecting public health.Vaccine critics suffered serious setbacks in the last year, as states strengthened immunization laws in response to measles outbreaks sparked by vaccine refusers. California tightened its vaccine requirements last fall despite protests during which anti-vaccine activists threw blood on state senators, assaulted the vaccine bill’s sponsor and shut down the Legislature.Now, many of these same vaccine critics are joining a fight against stay-at-home orders and business shutdowns intended to stem the spread of the coronavirus, which had killed more than 48,800 Americans as of Thursday afternoon. 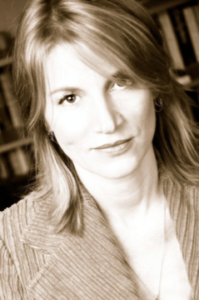 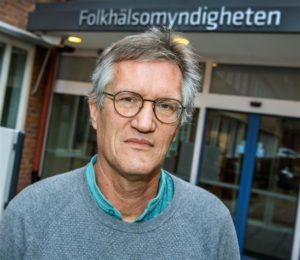 Sweden Shatters Lock-down Model As Curves Stay Flat I have good news for you. It’s a kind of bottled northern light, and I can’t wait to share it. A bottle of life, brought to you from one of the dullest yet most joyous and riveting press conferences I ever watched.Never before has “nothing happened,” been a bigger story.The press conference was on the website of the Swedish Health Ministry, posted April 22, and ran just over 45 minutes.The “controversial” health minister of Sweden, Anders Tegnell, and colleagues revealed the latest results of the Sweden Covid model which—as we all know— did not lockdown, did not quarantine.What made it “riveting” was this: There is no crisis, no death spikes, no national emergency, no shortage of hospital beds. Listening to the press conference, (twice) and transcribing every word was like watching paint dry. And with each passing moment, the story became clearer and clearer to me 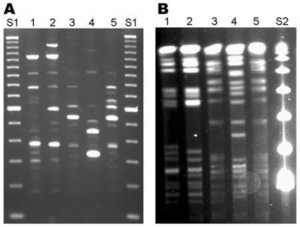 Was the COVID-19 Test Meant to Detect a Virus? “Scientists are doing an awful lot of damage to the world in the name of helping it. I don’tmind attacking my own fraternity because I am ashamed of it.” –Kary Mullis, Inventor of Polymerase Chain Reaction What do we mean when we say somebody has ‘tested positive’ for the Corona Virus? The answer would astound you. But getting this “answer” is like getting to a very rare mushroom that only grows above 200 feet on a Sequoia tree in the forbidden forest. I say that for dramatic effect, but also because I wound up, against all odds, finding it. Every day I wake up and work at shedding one more layer of ignorance —by listening carefully. I got lucky with scientists many years ago; Epic, incredible scientists, happening to cross my path when nobody else wanted to talk to them. Now their names are emerging, their warnings and corrections crystallizing. True “science” (the nature of the natural world) is never bad news. Globalist science is nothing but bad news. The reason Bill Gates wants you to believe a Corona Virus will exterminate over 450 million people is that he hates nature, God, and you. (A subjective interpretation.) Why is that? You’d have to ask his psychiatrist. 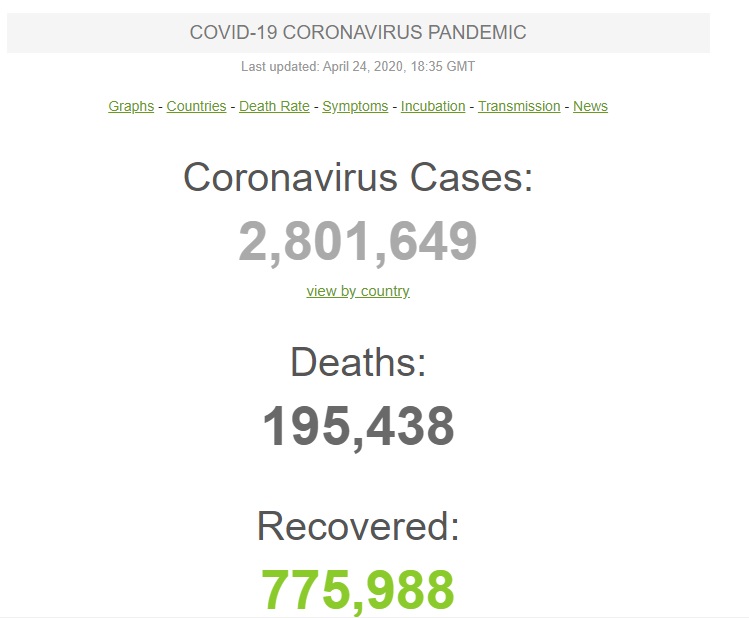 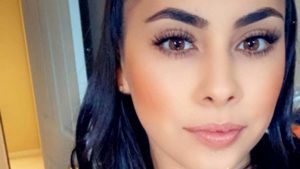 San Diego Woman Facing Fine, Jail Over COVID-19 Protest Plans 2nd Rally Two days after the Rev. Shane Harris called on San Diego police to cite organizers of Saturday’s “freedom rally” against COVID-19 orders, a San Diego woman has been notified she’s facing a $1,000 fine or jail time.Naomi Soria, 27, on Wednesday confirmed she was facing penalties for the downtown protest that drew hundreds. Later, she announced another rally this Sunday in Pacific Beach. Soria also goes by Naomi Israel on Facebook and Naomi Castaneda.On Facebook, Soria posted that she would be arrested for exercising her constitutional rights.“I have attorneys ready and an entire team here to protect me but I need your help,” she said. “Centers for American Liberty is assisting with my cause and has put up a way for you to help fundraise the money for my attorneys fees and any fees involved in this fight. 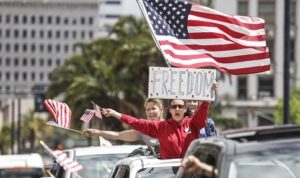 San Diego to fine 27-year-old woman $1,000 for peaceful protest April 21, 2020—Today, the San Diego Police Department informed a 27-year-old woman that she is being charged with a misdemeanor, punishable by up to 90 days and/or a $1,000 fine, for her participation in a peaceful protest on Saturday, April 18, 2020 in San Diego. The Center for American Liberty, in coordination with the Dhillon Law Group, are providing her with legal representation.An estimated 400 people gathered in San Diego to peacefully protest Governor Newsom’s shutdown of the state’s economy. At this time, we are unaware of any other participants being charged with a crime. The charged protester had shared information about the protest on social media, which may have led to the authorities deciding to single her out for punishment.“The First Amendment guarantees the right to peacefully protest,” said Harmeet K. Dhillon, Chief Executive Officer of the Center for American Liberty. “Our client participated in a responsible protest adhering to social distancing guidelines. She, along with other protestors, stood six feet apart on a public sidewalk.”

I hope you are well.
Apologises for my direct message but I have a very important question to ask you.
I heard about you on the Truth About Cancer website and I love what you do and how much you care for others.
My cousin, female 42, Macedonian and lives in North Macedonia, has a cancer which started in one of her ovaries and spread to her abdomen and pelvis.
She has undergone surgery to remove some parts of the cancer but not all of it, they also removed her large intestine. After the surgery she has difficulties eating & drinking even water, and as a result now her small intestines have become twisted and her condition is deteriorating.

I would like to ask you if you could please recommend me anything that you think might be helpful to save her life. I know it is a such a difficult question but any advice would be welcome and much appreciated.

Many Thanks in advance, I can’t thank you enough.
Please let me know if you would like any further information.
Best wishes,
-Dafina

Purified botanical CBD reduces early deaths in mouse study A purified botanical CBD used to treat mice with a rare form of epilepsy found for the first time that the treatment may reduce premature mortality, according to a new study.In a paper published in the British Journal of Pharmacology today, scientists from the University of Reading and GW Research Ltd found that treating mice which have Dravet syndrome with purified botanical CBD showed improved mortality rates and lower scores for anxiety, depressive, cognitive and autistic-like social behavioral symptoms.Dr. Alister McNeish, an Associate Professor in Cardiovascular Pharmacology at the University of Reading said:”This is an exciting finding that underscores the potential for purified botanical CBD to make a substantial difference to people with epilepsy. This is the first comprehensive longer term study in mice looking at CBD on problems associated with Dravet syndrome beyond seizure. It is the first to demonstrate that CBD treatments may have a beneficial impact the problems and potentially help reduced early death in mice for the rare forms of epilepsy. 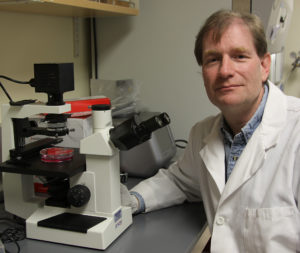 Dietary supplements an important weapon for fighting off COVID-19 Supplements containing vitamins C and D and other micronutrients, sometimes in amounts exceeding the federally recommended levels, are a safe, effective and low-cost means of helping your immune system fight off COVID-19 and other acute respiratory tract diseases, an Oregon State University researcher says.Findings were published today in the journal Nutrients.Adrian Gombart of OSU’s Linus Pauling Institute and collaborators at the University of Southampton (United Kingdom), the University of Otago (New Zealand) and University Medical Center (The Netherlands) say public health officials should issue a clear set of nutritional recommendations to complement messages about the role of hand washing and vaccinations in preventing the spread of infections.”Around the world, acute respiratory tract infections kill more than 2.5 million people every year,” said Gombart, professor of biochemistry and biophysics in the OSU College of Science and a principal investigator at the Linus Pauling Institute. “Meanwhile, there’s a wealth of data that shows the role that good nutrition plays in supporting the immune system. As a society we need to be doing a better job of getting that message across along with the other important, more common messages.”