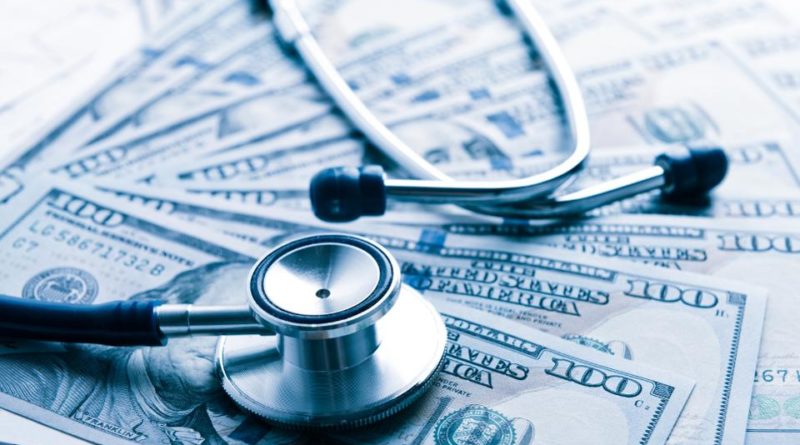 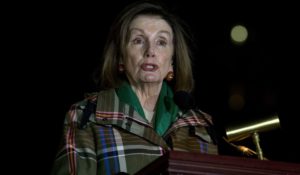 Nancy Pelosi pulls impeachment rabbit from magic hat So it’s done. House Speaker Nancy Pelosi, in a televised press conference with a message that surprised no one, said the Democrats are indeed going forward with impeachment. The bigger surprise was her ability to keep a smile off her face while speaking of her love for the country and regard for the founders. For any Democrat, that’s a remarkable feat. For Pelosi? For a pol like Pelosi who’s made a decades-long career out of tearing down the framers’ visions for the republic — who’s stretched a summer of resistance against this president into a three-plus years era of resistance? Well, for a pol like Pelosi, that’s simply breathtaking. Quit-your-day-job-go-into-theater breathtaking. 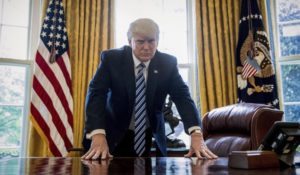 Trump welcomes impeachment: ‘Do it now, fast’ President Trump on Thursday invited House Democrats to impeach him, saying, “Do it now, fast.” Mr. Trump’s taunting of House Democrats came an hour before House Speaker Nancy Pelosi announced that they were proceeding with articles of impeachment. Mr. Trump said he welcomed impeachment as a chance to fight the allegations against him in the Senate and to clear the way for Congress to get back to work.“The Do Nothing Democrats had a historically bad day yesterday in the House. They have no Impeachment case and are demeaning our Country. But nothing matters to them, they have gone crazy. Therefore I say, if you are going to impeach me, do it now, fast, so we can have a fair trial in the Senate, and so that our Country can get back to business,” Mr. Trump wrote in a series of Twitter posts. The president said his Senate trial would force testimony by Mrs. Pelosi, Rep. Adam B. Schiff, former Vice President Joseph R. Biden and his son Hunter. 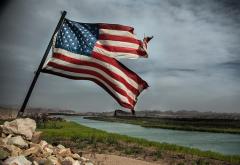 How to Avoid Civil War: Decentralization, Nullification, Secession It’s becoming more and more apparent that the United States will not be going back to “business as usual” after Donald Trump leaves office, and it is easy to imagine that the anti-Trump parties will use their return to power as an opportunity to settle scores against the hated rubes and “deplorables” who dared attempt to oppose their betters in Washington, DC, California, and New York. This ongoing conflict may manifest itself in the culture war through further attacks on people who take religious faith seriously, and on those who hold any social views unpopular among degreed people from major urban centers. The First Amendment will be imperiled like never before with both religious freedom and freedom of speech regarded as vehicles of “hate.” Certainly, the Second Amendment will hang by a thread. But even more dangerous will be the deep state’s return to a vaunted position of enjoying a near-total absence of opposition from elected officials in the civilian government. The FBI and CIA will go to even greater lengths to ensure the voters are never again “allowed” to elect anyone who doesn’t receive the explicit imprimatur of the American intelligence “community.” The Fourth Amendment will be banished so that the NSA and its friends can spy on every American with impunity. The FBI and CIA will more freely combine the use of surveillance and media leaks to destroy adversaries.

How profoundly will H.R. 1959 PRESERVING PATIENT ACCESS TO COMPOUNDED MEDICATIONS ACT OF 2019 impact the products you speak to your audience about? This is another way for Big pHARMa to squeeze natural remedies out. What would you advise for us to prep for this? 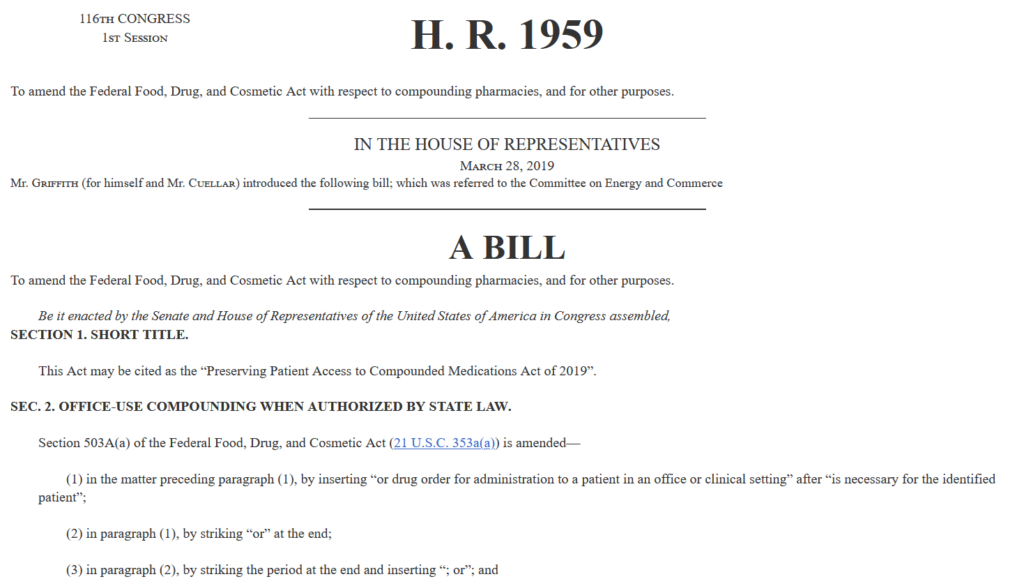 Compounding medications are customized medications prescribed by physicians based on the specific needs of a patient. For patients who have allergies to common fillers, are unable to swallow pills, or need a custom dosage, compounding medications can be lifesaving. Compounded medications fill a gap in health care by creating customized solutions for specific patient needs that cannot be treated with mass-produced, pharmaceutical medications.Despite a long history of safe use and patient need, the FDA is in the process of reviewing and potentially blocking patient access to more than 300 ingredients used in these compounded medications. The FDA’s current position is that if there is an approved pharmaceutical equivalent that will address the condition, the compounded ingredient is not needed. By dismissing why patients need personalized medicine, the FDA is discounting functional medicine uses and only taking into consideration whether an ingredient addresses a specific disease. On Sep 5, 2019 the FDA announced a proposed rule identifying 26 ingredients that the agency reviewed and proposes to remove from the list of ingredients that can legally be compounded. If the FDA is allowed to continue this overreach, patients would immediately lose access to safe, life-saving medications that they rely on every day. 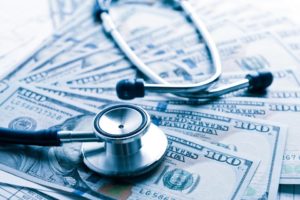 20% Of Prescription Drugs Save Money, And Are Not Just Cost-Effective Nearly 20% of prescription drugs are not only cost-effective, but they are cost-saving. That is, drug expenditures are offset by lower costs in other healthcare sectors, such as hospital and physician services. When performing cost-effectiveness analyses, such as the cost-per-Quality Adjusted Life Year (QALY) there are four broad categories pharmaceuticals can fall under: First, about one-fifth are cost-saving; second, around 30% are cost-effective relative to a cost-per-QALY threshold of $150,000; third, roughly 20% are over the threshold, but still provide some incremental benefits, only at a very high cost; fourth, approximately 20% of drugs add costs to the system without contributing any incremental benefit. The calculations of cost-effectiveness depend critically on the context in which the drug is used, the intervention with which it is compared, and the cost-effectiveness threshold chosen. Also, it’s important to distinguish between preventive technologies, such as vaccines, and pharmaceuticals used as treatments for diseases. The vast majority of vaccines are considered cost-saving. 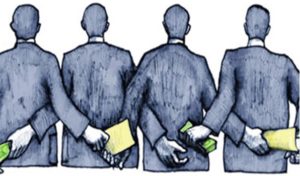 Time to end drug company distortion of medical evidence While there’s much to celebrate in medicine, it’s now beyond doubt that we have too much of it. Too many tests, diagnoses, pills and procedures are wasting resources that could be better spent meeting genuine need.As a recent OECD report concluded, up to one-fifth of health spending may be wasted, and many patients “unnecessarily harmed” by treatments they didn’t need. Antidepressants, for example, can be life-savers for some people. But drug company-funded studies have overplayed their benefits and downplayed their harms, contributing to overuse and unnecessary side effects.Widespread industry influence is jeopardizing the integrity of research and medical education, and threatening the quality of patient care. Today in The BMJ a global group of researchers, doctors, editors, regulators and advocates outline key strategies to reduce the financial entanglement with industry. The first step is ensuring the evaluation of any new tests, treatments and technologies are free from industry influence.

Since you guys are supposedly science based guys. The science behind studying the ketogenic diet shows a thirty percent increase in all cause mortality long term. Only a whole food plant based diet has been proven to reverse the first worlds #1 cause of death. Please explain “clean” animal products 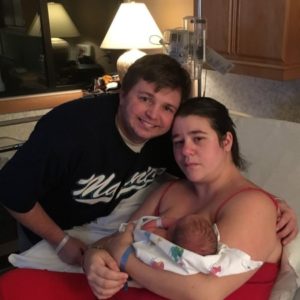 Federal Investigation Determines that Oregon CPS Violates Parental Rights of Disabled Parents – Too Low of IQ Not Reason Enough to Take Away Children Back in 2017 Sherrene Hagenbach, an Oregon volunteer Social Service Agent (SSA), reached out to Health Impact News regarding a couple she was mentoring at the time, Eric and Amy Ziegler, who lost their two children when social workers determined that their IQs were too low to be parenting. Sherrene was not happy with how their parental rights were being violated, and became a whistleblower. Both parents had highschool diplomas, and there was no history of abuse. But Oregon CPS took away their children as soon as they were born. Due to all the media coverage of their story, the Office for Civil Rights (OCR) at the U.S. Department of Health and Human Services began to investigate Oregon CPS and their practices of removing children from disabled parents. They allegedly found out that Oregon’s practice of discriminating against parents with disabilities was not limited to the Ziegler case. Today (December 4, 2019), it was announced that the OCR reached a “voluntary resolution agreement” with the Oregon Department of Human Services concerning the rights of parents with disabilities in Child Welfare Programs. 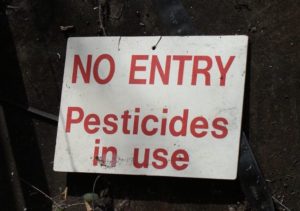 Don’t Look, Don’t See: Time for Honest Media Reporting on Impacts of Pesticides The UK-based Independent online newspaper recently published an article about a potential link between air pollution from vehicles and glaucoma. It stated that according to a new study air pollution is linked to the eye condition that causes blindness. The report explained that researchers had looked at vision tests carried out on more than 111,000 people across Britain between 2006 and 2010 and cross-referenced results against levels of air pollution in their neighbourhoods. Those living in areas with higher amounts of fine particulate matter were at least 6% more likely to have glaucoma than those in the least polluted areas. Glaucoma affects half a million people in the UK and can cause blindness if left untreated. However, the study cited by The Independent, published in Investigative Ophthalmology & Visual Science, was unable to prove that air pollution was a trigger.