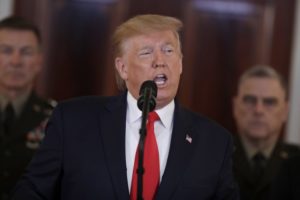 US, Iran step back from the brink; region still on edge The U.S. and Iran stepped back from the brink of possible war on Wednesday as President Donald Trump signaled he would not retaliate militarily for Iran’s missile strikes on Iraqi bases housing U.S. troops. No one was harmed in the strikes, but U.S. forces in the region remained on high alert. Speaking from the White House, Trump seemed intent on deescalating the crisis, which spiraled after he authorized the targeted killing last week of Iran’s top general, Qassem Soleimani. Iran responded overnight with its most direct assault on America since the 1979 seizure of the U.S. Embassy in Tehran, firing more than a dozen missiles at two installations in Iraq. The Pentagon said Wednesday that it believed Iran fired with the intent to kill. 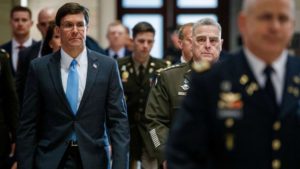 Defense Secretary Mark Esper urged Congress not to debate limits to President Donald Trump’s power to strike Iran because doing so might embolden Tehran and hurt U.S. troops, multiple sources tell ABC News. The suggestion by Esper, in a classified briefing for lawmakers on Wednesday, enraged some members, including Utah Republican Sen. Mike Lee, who swiftly marched to the television cameras following the 75-minute briefing to declare it “insulting.” Lee said the briefing felt like being told to be “good little boys and girls and run along and not debate this in public.” 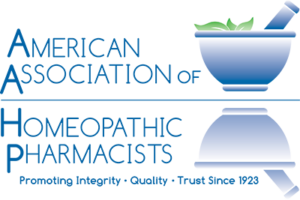 AAHP’s Views on Aspects of FDA’s Revised Draft Guidance Since 2015, the Food and Drug Administration (FDA) has been engaged in a reevaluation of Compliance Policy Guide 400.400, Conditions under Which Homeopathic Drugs May Be Marketed. FDA issued a new draft policy in December, 2017, and, after a public comment period, it issued a revised draft in October, 2019, again with an invitation for public comment. A number of organizations have taken extreme positions concerning the potential impact of the revised guidance, possibly because of a misunderstanding of the legal structure which governs FDA actions. The American Association of Homeopathic Pharmacists (AAHP), which represents the manufacturers and marketers of virtually all homeopathic drugs in the United States (based on unit volume), believes that these extreme and alarmist publications pose a far greater potential danger to homeopathy in the United States than does FDA’s revised draft guidance. No organization has more at stake in this matter than AAHP members and their customers. Upon careful and thoughtful analysis, including more than three decades of interaction with the agency, AAHP does not believe that the revised FDA draft guidance poses a meaningful risk to the continued availability of homeopathic drugs in the United States. 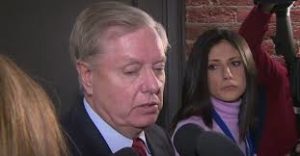 Graham predicts Senate will take up impeachment trial next week Sen. Lindsey Graham (R-S.C.) said on Wednesday that the Senate will start its impeachment proceedings next week, signaling an end to the stalemate over the articles which have sat in the House since December.”Hats off to Mitch McConnell for playing this very well. We’ll take the trial up next week,” Graham said during an interview with Fox News’s Sean Hannity. Graham argued that Speaker Nancy Pelosi‘s (D-Calif.) “impeachment dam has broken,” pointing to growing calls from some Senate Democrats for her to transmit the two articles of impeachment to the Senate. “You said it was urgent; if you believe it to be urgent, send it to the Senate for disposition,” Graham said. “She’s losing Democrats in the Senate. The impeachment dam of Nancy Pelosi is about to crack.” 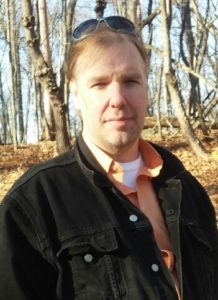 James “Jack” Lyons-Weiler, PhD is a Pittsburgh-area scientist, lecturer, and author, who has worked collaboratively for over twenty years on over one hundred research studies. After conducting research in Amazonia on prehistorical shifts in climate change, he focused on questions of how to best understand evolutionary biology, and to questions on the origins of biological diversity. Thanks to a Sloan Foundation fellowship, he was then able to shift focus to biomedical problems in cancer, diabetes, heart disease, infectious disease and many other aspects of clinical, biomedical and translational research. To provide a lasting monument to his mother, and to help others share advances in cancer research, he served as the Founding Editor-in-Chief of the open access, peer-reviewed research journal Cancer Informatics (Libertas Academica). An expert in study design, complex data analysis, genetics and systems biology, he has written three books: “Ebola: An Evolving Story” (2015), “Cures vs. Profits: Successes in Translational Research” (2016), and “The Environmental and Genetic Causes of Autism” (2016). For “Causes”, he reviewed over 3,000 research studies, and he cited >2,000 in the final product. He is currently CEO/Director of The Institute for Pure and Applied Knowledge, which conducts research without profit motive to “Reduce Human Pain and Suffering Through Knowledge.” A regular featured guest on many radio shows focused on public health, Dr. Lyons-Weiler has reached millions with his defense of science as a way of knowing. He sees the public’s current widespread distrust in science as misplaced, because individual scientists and corporations should be held accountable when they mislead the public for profit motives, not the entire enterprise of science.

Is CBC’s ‘Marketplace’ Planning a “Spy vs. Spy” Hit Piece on IPAK and James Lyons-Weiler, PhD For Educating the Public on Science? On New Year’s Eve, I received an email from a Katie Pedersen from CBC News informing me that CBC news had sent an undercover reporter to a VIP event following the VIE event in Washington, DC. I had a conversation with a man who represented himself as being interested in how best to organize vaccine risk awareness in the Western Provinces of Canada. I offered by opinion, and then he pursued setting up an IPAK Science Day (to my knowledge unconnected to any particular piece of legislation, but nevertheless) and asked an IPAK Science Facilitator (SF) to inquire about costs. In email exchanges, he proferred that he could bring in 400 people; obviously, the more people, the lower the cost. I think the last communication I had about this with my SF was a quote of $15 if it were that many people. We never agreed on a final donation level per person for the fictional event he was planning. Nevertheless, here is the statement I shared with Ms. Pederson. See what you think? I notice in the message that they twist my words a bit to make it seem like I want to inflict damage to the public via “death by 1,000 cuts”; clearly, that would be rather psychopathic. I’m grateful to Katie for sharing their misinterpretation, and the chance to correct it. I represent the public’s interests in objective, evidence-based medicine and biomedical research. I am looking forward to their broadcast sometime after January 7th, I’m told. 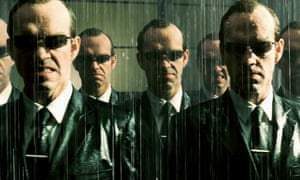 What the Public Should Expect from Legitimate Scientists WHEN IPAK launched our initial inquiry into the FDA logic behind lax regulation of pediatric dosing of aluminum, we had no idea what we would find in terms of the history of how and why dosing of aluminum in vaccines is stated per dose, rather than in terms of mcg/kg/day. We had no idea that we would find, when studying the provenance of information in the science behind vaccine aluminum toxicity, the use of information from oral doses of ingested forms of aluminum fed to adult mice and rats. We expected the bulk of the consideration would be data from dose escalation studies of injected forms of aluminum in infant mice. Failing to find any such studies, we wondered what a toxic pediatric dose limit might look like, thus leading to our “Reconsideration” study. We also found studies that were based – roughly – on the plasma clearance rates of aluminum in adults – only to find serious issues with the studies providing the initial model parameters upon which the now infamous Mitkus study were based. The Mitkus study estimated pediatric plasma clearance of aluminum from available data from creatinine, not aluminum hydroxide salts – for which there can be no explanation other than the US FDA did not find it a priority to use Science to estimate pediatric clearance. Their multicompartment model itself has issues, not the least of which is the consideration that the initial model data were based on a single dose in a handful of human adults. 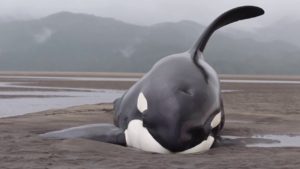 Orca Beaches Himself on Aluminum Toxicology, Killing Mitkus in the Process EVER SINCE I first published a reveal that pharmaceutical companies have successfully orchestrated a take-over of regulatory agencies at the expense of objectivity in the science of public health, I’ve been attacked for daring to hold the view that Science is for asking questions, and that, above all, objectivity should play a role in all of Science, including vaccine safety science. Among those assailing such an evidently revolutionary concept is an MD who has evidently assigned himself the role of gatekeeper over the safety of vaccines as a liability-free commercial product. While not trolling papers in journals requesting their retraction if they shine a bad light on vaccines, this MD’s latest assault occured a few days after independent investigative journalist and author James Grundvig revealed the irksome Orca’s identity as David Gorski, questioning whether a person employed in vocation as austere and revered as a medical doctor should conduct themselves in public like a five-year-old spewing filth and personal attacks on stewards of Objectivity in Science, allegedly in the name of Science, skewing his five followers’ perception of how one should think about vaccine safety science.