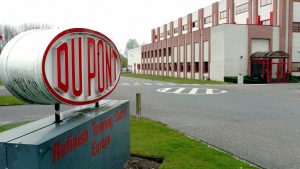 Federal study: Chemicals toxic at levels EPA thought safe The chemicals used by a West Virginia factory to make non-stick products are dangerous at levels the U.S. Environmental Protection Agency had thought were safe, according to a federal study that had been previously blocked from publication. The federal Agency for Toxic Substances and Disease Registry released the study on PFAS chemicals Wednesday, news outlets reported. It said the chemicals are dangerous at levels around 10 times lower than the EPA’s advised exposure of 70 parts per trillion. The DuPont Co., which used the chemicals to create non-stick products such as Teflon, now faces thousands of lawsuits from people living near its Parkersburg-area Washington Works plant who say their water was contaminated. The chemicals have been linked to cancer, immune effects and adverse developmental effects on fetuses during pregnancy. Lawmakers had urged the EPA in May to publish the study after Politico reported it had been blocked. Politico said the Trump administration blocked the study, concerned that it could result in a “public relations nightmare.” Before it was released, the state’s U.S. senators —Democrat Joe Manchin and Republican Shelley Moore Capito — had urged the EPA to come forward with the study.

Thirty Years On, How Well Do Global Warming Predictions Stand Up? James E. Hansen wiped sweat from his brow. Outside it was a record-high 98 degrees on June 23, 1988, as the NASA scientist testified before the Senate Committee on Energy and Natural Resources during a prolonged heat wave, which he decided to cast as a climate event of cosmic significance. He expressed to the senators his “high degree of confidence” in “a cause-and-effect relationship between the greenhouse effect and observed warming.”  Pat Michaels and Ryan Maue, the director and an adjunct scholar at the Cato Institute’s Center for the Study of Science, respectively, discussed in an opinion piece in The Wall Street Journal this week the three scenarios that Hansen developed in 1988 for the future global carbon dioxide emissions. In Scenario A—‘business as usual’—the prediction was that the earth would warm by 1 degree Celsius by 2018. Scenario B, which Hansen considered the “most plausible”, predicted lower emissions, rising at the same rate today as they did in 1988 and predicted that the warming would be 0.7 degree Celsius by 2018. In Scenario C—considered “highly unlikely” by Hansen—the projection was that emissions would flat-line after 2000. According to Michaels and Maue’s piece in the WSJ, the scenario closest to today’s reality is Scenario C. “On the 30th anniversary of Mr. Hansen’s galvanizing testimony, it’s time to acknowledge that the rapid warming he predicted isn’t happening,” Michaels and Maue write. 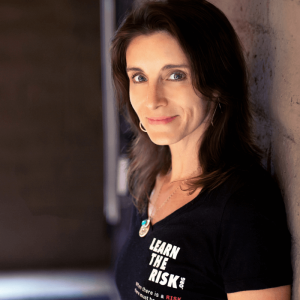 Brandy Vaughan, a former pharmaceutical representative, founded the Council for Vaccine Safety in response to one of the nation’s first mandatory vaccination for education law — SB277 in California. When working in the pharma industry, Brandy sold Vioxx, a painkiller that was found to double the risk of stroke and heart attacks and was eventually taken off the market. “From that experience, I realized that just because something is on the market, doesn’t mean it’s safe,” explains Brandy. “And much of what we are told by the healthcare industry, just simply isn’t the truth.”

After leaving the pharmaceutical industry, Brandy spent eight years living in Europe and seeing how healthcare is done very differently outside the US. Coming home with a vaccine-free son, she was bullied at a pediatrician’s office when she asked questions that every parent should ask: what are in these vaccines?

After spending years researching vaccine ingredients, the diseases they supposedly guard against and the risks of vaccinating versus not vaccinating, Brandy chose to raise her son without chemical interference. “I check food labels — I buy organic whenever possible — I try to minimize my son’s exposure to chemicals through lotions, etc. Why would I not want to protect my son from the chemicals in vaccines? Chemicals are chemicals — no matter what they form they come in,” explains Brandy. “You owe it to your child to do your own research, and not just believe everything you’re told, especially when it’s only one side of the story — the one that prioritizes profit over your child’s health.”

Brandy Vaughan has spoken at numerous educational events, rallies, symposiums and has been featured in various media channels including InfoWars, the Ritchie Allen show, the Liberty Beacon, the Brain Copeland show, the Information Press and Future Money Trends. 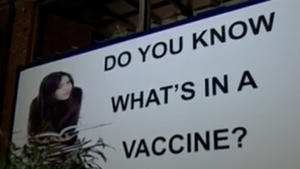 Do You Know What’s In a Vaccine?’ Australia Moves To Remove ‘Anti-Vaccine’ Billboard An ‘anti-vaccine’ billboard is now displayed over a heavily trafficked corner in Perth, causing a slew of controversy in the area. Residents are upset that the owner of the billboard accepted money from the “American anti-vaccine group” and they want it immediately removed. Perth’s 7News interviewed a woman who’s child was “too young to be vaccinated” for whooping cough and reportedly passed away from the illness. She says she’s extremely upset that the billboard is allowed to display in the area. Australia is one of the most stringent, draconian vaccine areas in the world. It is surprising that a country with limitations on free speech would allow the billboard to hang. The state government is already moving to have the billboard removed. Sadly, the billboard ONLY ask if you know what is in a vaccine, it doesn’t technically discourage anyone from getting vaccinated. But that’s the place we’ve found ourselves as liberal policy continues to attack free speech. Remember, even questioning a vaccine makes you ‘anti-vaccine.’ 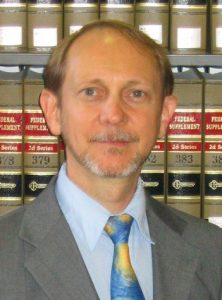 Alan Phillips, J.D., a nationally recognized legal expert on vaccine policy and law, is the only attorney in the U.S. whose practice is focused solely on vaccine exemptions and waivers, and vaccine legislative activism. He consults with individuals, families, attorneys, legislators, and legislative activists throughout the U.S. on vaccine exemption and waiver rights and vaccine politics and law [disclaimer]. He hosts The Vaccine Agenda, a weekly radio show,  is published internationally on vaccine politics and law, and speaks at rallies and conferencesthroughout the U.S. Alan has been a regularly featured writer for Natural News, GreenMedInfo.com, Liberty Roundtable, and the Pastoral Medical Association.

Alan is a Board Member of the World Association for Vaccine Education and the Pastoral Medical Association; an Advisory Board Member of the American Chiropractic Autism Board; a co-founder of North Carolina’s Citizens for Healthcare Freedom; an Associate and Legal Advisor to Source Force, Inc.(a caring ministry for poverty AIDS and terminal cancer victims, recently dissolved); and an Advisory Counsel Member of Thai Healing Alliance International.

For well over a decade Alan has helped clients legally avoid vaccines required at birth; for daycare, school and college 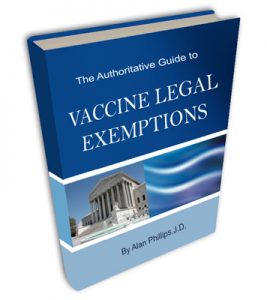 enrollment (public, private, homeschool and military); as a condition of employment; in the military (members, families and civilian contractors); for immigrants (including foreign adoption), for international travel; for children of parents in child custody disputes who disagree about vaccinating their children; and other situations. Alan’s e-book, The Authoritative Guide to Vaccine Legal Exemptions, is the only publication that provides authoritative, accurate, in-depth information about how state and federal laws interact with individual circumstances to form the precise boundaries of each person’s legal right to refuse vaccines. His Vaccine Rights website is the only Internet site dedicated solely to vaccine rights. Alan also spearheaded the Pandemic Response Project (PReP), a national initiative aimed at reforming state laws across the U.S. that currently provide for vaccines to be mandated *without exemptions* during declared emergencies and for non-vaccinated persons to be quarantined in government facilities against their will. 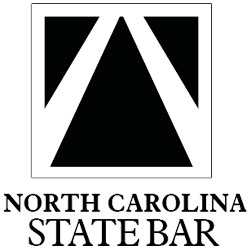 BREAKING NEWS: STATE BAR SUES LEADING VACCINE RIGHTS ATTORNEY IN CLASSIC WITCH HUNT! The North Carolina State Bar, the agency that licenses NC attorneys, has taken the unprecedented step of filing a lawsuit against the nation’s leading vaccine rights attorney, Alan Phillips, J.D., to force Phillips to hand over years of his clients’ files or risk being jailed for civil contempt…Attorney Phillips is the nation’s leading Vaccine Rights attorney, the only attorney whose practice is focused solely on vaccine exemptions and vaccine legislative activism, and who works with clients, attorneys, legislators and activists nationally in virtually every possible U.S. exemption setting.[1] North Carolina is known as “Vaccine Central” for its award-winning vaccine companies.[2] So, it’s not surprising that the NC State Bar is going after Phillips, with what Phillips claims are invented facts and law in a series of steps that appear to have been designed from the start to disbar Phillips, for helping people legally avoid vaccines. This is not just a personal attack against Phillips, it’s an attack on the entire vaccine awareness movement, given Phillips’ unique role in helping clients nationally with exemptions and legislative activism! So, please 1) share this story far and wide, 2) sign the petition linked below, 3) donate to support Phillips’ legal defense fund, and 4) stay tuned for updates to this story!

Nothing Implied Here…Move Along 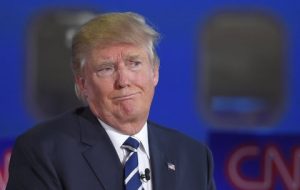 Trump Carried Counties With High Opioid Use: Study U.S. counties with high rates of prescription painkiller use voted heavily in favor of Donald Trump in the 2016 presidential election, a new study finds. Researchers found that, on average, Trump got about 60 percent of the vote in counties with the greatest use of prescription opioids — drugs such as Vicodin and OxyContin. That was in contrast to counties with relatively low opioid prescription rates; there, Trump garnered just under 39 percent of the vote, on average. The findings add to evidence that people in communities with economic and social woes commonly threw their support to Trump in 2016. But they do not mean that people addicted to opioids voted for him, the study authors said. “It would be a mistake to assume that,” said lead researcher Dr. James Goodwin, of the University of Texas Medical Branch, in Galveston. That’s because the study looked at counties’ rates of legitimate opioid prescriptions to Medicare patients — mostly adults older than 65. 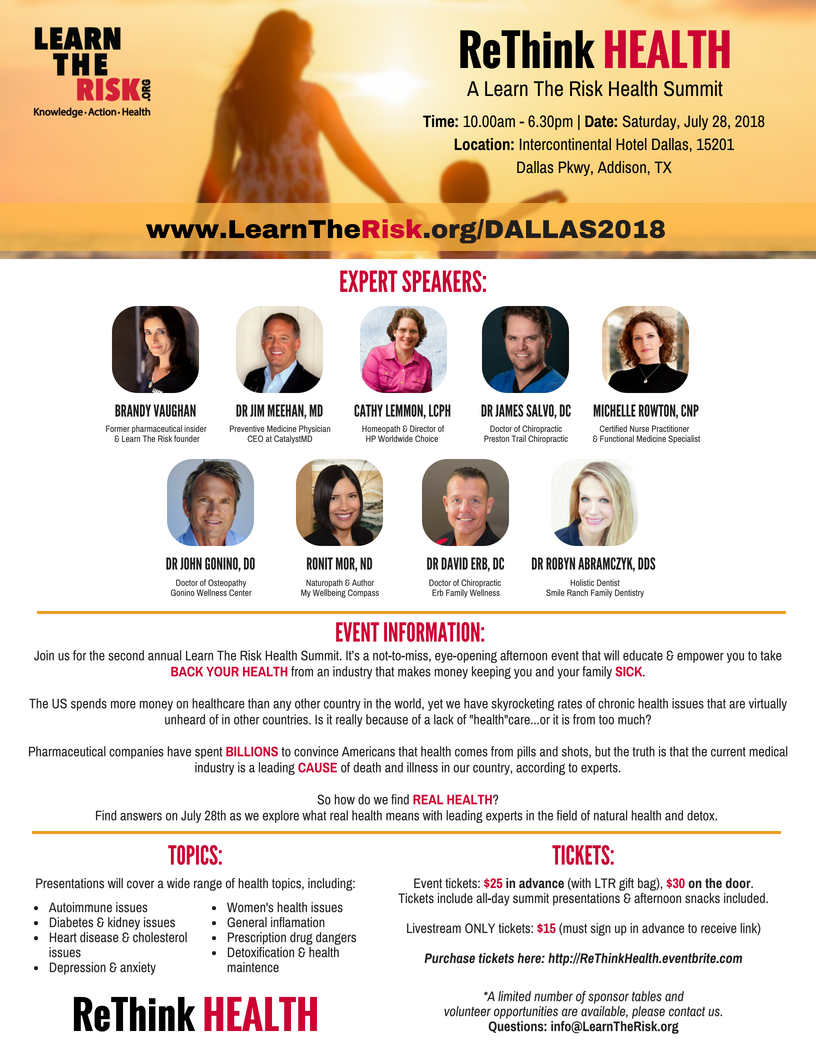