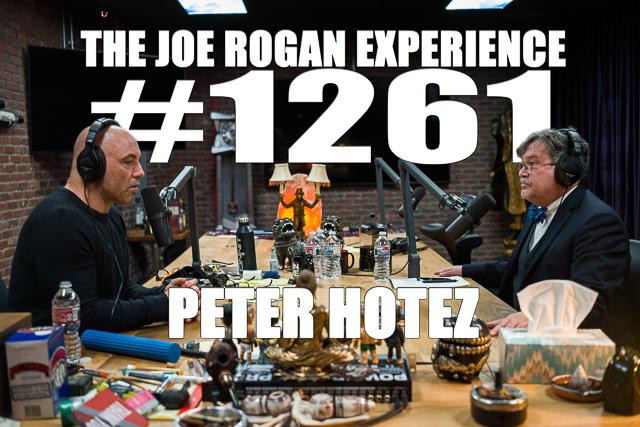 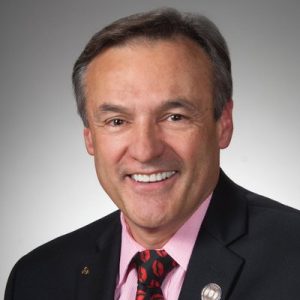 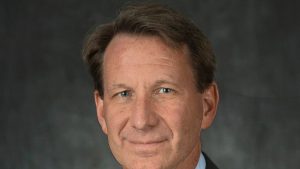 NIH cancer chief to serve as acting FDA commissioner The head of the National Cancer Institute will temporarily take charge of the Food and Drug Administration next month after the departure of its current chief. The appointment Tuesday of Dr. Ned Sharpless comes a week after Scott Gottlieb unexpectedly announced his resignation. Sharpless currently heads the National Institutes of Health’s cancer division, which directs billions in federal funding and grants for research. His name has been circulated as one of several government officials likely to succeed Gottlieb on a permanent basis. Health and Human Services Secretary Alex Azar said the search for a new FDA commissioner is underway. The FDA’s top official is nominated by the president and must be confirmed by the Senate, typically following public hearings before health lawmakers. 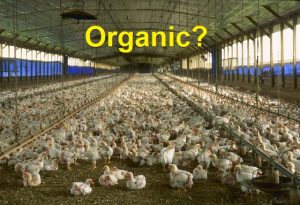 We Can No Longer Rely on Organic Standard Consumers looking for clean, healthy food have for years turned to foods with the USDA’s organic seal. This seal is understood to mean that the food has been grown in accordance with organic principles—most importantly, that the farming practices promote healthy soil, which in turn produces healthy food. Unfortunately, corporate influence has infected the USDA’s organic program to such an extent that it can be difficult to trust the organic seal. Concentrated animal feeding operations (CAFOs) have taken over organic eggs and dairy. According to organic standards, livestock are supposed to have access to the outdoors, fresh air, and sunlight. But these provisions have been interpreted in such a way as to allow CAFOs to confine animals to barns but add “porches”—a roof built over a concrete floor with screens as walls—and still label their livestock as “organic.” This allows CAFOs to continue to raise millions of chickens or livestock on the cheap in cramped, squalid conditions but charge the organic premium.

Gene-edited food quietly arrives in restaurant cooking oil Somewhere in the Midwest, a restaurant is frying foods with oil made from gene-edited soybeans. That’s according to the maker of the oil, which says it’s the first U.S. commercial use of a gene-edited food product. Calyxt says its oil has no trans fats and a longer shelf life than other soybean oils. Whether demand builds remains to be seen, but the milestone signals gene editing’s potential to alter foods without the controversy of conventional GMOs. Unlike conventional GMOs, which are made by injecting DNA from another organism, gene editing lets scientists snip out or add genes responsible for specific traits. Calyxt and others say their gene-edited foods aren’t GMOs since they could theoretically be made with traditional breeding. Consumer advocacy groups say regulators should approve gene-edited foods on a case-by-case basis. 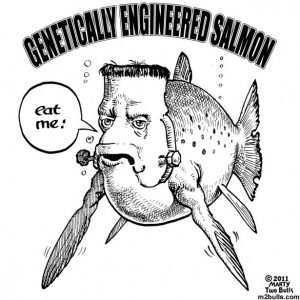 FDA Approves Controversial GMO Salmon For Import The United States Food and Drug Administration has decided that their previous ban on genetically modified salmon can be lifted.  In 2016, Congress said the salmon could not be sold in the United States until the FDA finalized labeling guidelines to inform consumers the product was genetically engineered. That’s when the FDA implemented the import alert. But all that has changed now. In 2015, the FDA deemed the AquaAdvantage Salmon safe, marking the first U.S. approval of a genetically engineered animal intended for food.  But the 2016 import alert prevented the salmon from being sold in the U.S…until now. According to CNN,  Congress passed a law directing the U.S. Department of Agriculture to set a national mandatory standard for disclosing bioengineered foods. That standard was issued last December. 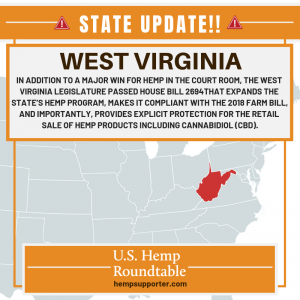 TWO BIG WS FOR HEMP IN WEST VIRGINIA It was a wild and wonderful week in West Virginia for hemp. As you may recall from last fall, the Mountain State’s US Attorney sought and obtained a temporary restraining order (TRO) against a hemp company, alleging that it did not comply with the regulations of the state’s agricultural pilot program.  Specifically, the suit argued that the West Virginia company illegally imported seeds from a Kentucky pilot program participant.  According to the complaint, the law requires all hemp seed to be imported from overseas. Of course, that’s not the law, and Frost Brown Todd’s Carte Goodwin filed a motion to dismiss in federal court.  The Court initially removed the TRO, and last week, formally dismissed the government’s case. The Court concluded that because the 2018 Farm Bill removed industrial hemp from the purview of the Controlled Substances Act, the federal government had no jurisdiction to inject itself into areas of oversight that Congress reserved to the states.

BREAKING: FDA COMMISSIONER SCOTT GOTTLIEB RESIGNS – ROUNDTABLE ROUNDUP FDA Commissioner Scott Gottlieb announced that he plans to leave the agency. While this development is surprising, it is still too soon to say what this could mean in relation to the acceptane of hemp-derived cannabidiol (CBD) as a food additive and/or nutritional supplement. Stay tuned to this space for further updates. In the meantime, you can read more about Commissioner Gottlieb’s resignation 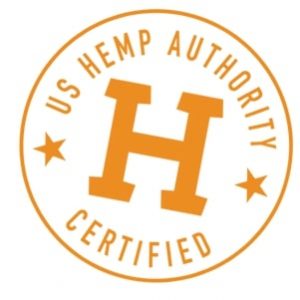 US HEMP AUTHORITY ANNOUNCES FIRST CERTIFIED SEALS The U.S. Hemp Authority today announced the first awards of its Certification Seal to 13 outstanding companies that have met the stringent standards the industry laid out for quality and safety. In addition to elevating consumer confidence in the quality and safety of hemp products, this voluntary certification demonstrates the industry’s commitment to working with federal and state regulators and law enforcement agencies. Modeled after existing federal regulations for manufacturing in the dietary supplement industry, these standards offer an industry-led model for any future regulations to ensure safety and quality. “As the market for hemp-derived products undergoes rapid growth, it is critically important for us to signal to the world that we intend to act responsibly. Quality assurance and safety must come first, and that’s why we set off on this journey,” said Marielle Weintraub, PhD, president of the U.S. Hemp Authority. “Creating these standards was a long journey, but after thousands of pages of public and stakeholder input and countless hours of hard work, we are thrilled to announce our first awardees today.” 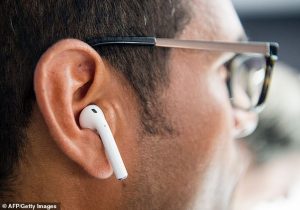 Are AirPods dangerous? 250 scientists sign petition warning against cancer from wireless tech including the trendy in-ear headphones Scientists are growing increasingly concerned over the potential health risks of wireless technologies which, they say, national and international regulations ‘fail’ to limit. And new technologies are arriving every day – and customers can’t buy them fast enough. Apple’s wireless AirPods, for example, ‘communicate with one another using a magnetic induction field, a variable magnetic field [one] sends through your brain to communicate with the other,’ explains Dr Joel Moskowitz. Dr Moskowitz, a University of California, Berkeley community health professor who focuses on cell phone exposures, says there isn’t even research on what this could do to the brain yet, let alone regulations to limit the potential effects. ‘But I couldn’t imagine it’s all that great for you,’ he says. Wireless technologies are simply outpacing both research and regulation – and it could have disastrous effects for our health. A petition warning that microwave radiation from many popular wireless technologies may pose health risks has gathered 250 signatures.