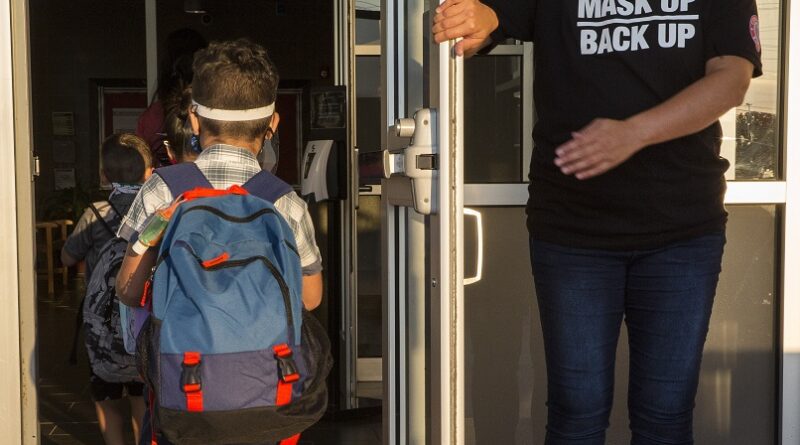 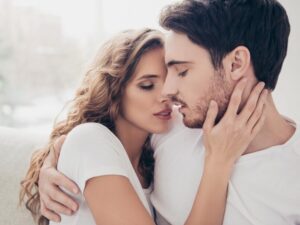 Scientists Predict Birthrates, Marriage, Gender Roles Will Change Dramatically in Post-Pandemic World COVID-19 and America’s response to it are likely to profoundly affect our families, work lives, relationships and gender roles for years, say 12 prominent scientists and authors who analyzed 90 research studies and used their expertise to evaluate our reaction to the pandemic and predict its aftermath. The group, which included several UCLA researchers, foresees enduring psychological fallout from the crisis, even among those who haven’t been infected. Their predictions and insights, published on October 22, 2020, in the journal Proceedings of the National Academy of Sciences, include: 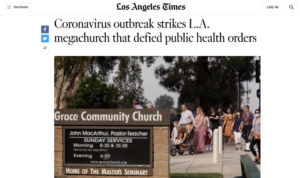 LA Times Targets John MacArthur’s Church By Labeling Three COVID-19 Cases An ‘Outbreak’ The Los Angeles Times targeted California pastor John MacArthur and Grace Community Church on Thursday by publishing an article that framed the congregation’s three reported COVID-19 cases as an “outbreak.” “Coronavirus outbreak strikes L.A. megachurch that defied public health orders,” said the headline. The church defied county orders to resume in-person services in July. While the Times noted it has “an estimated attendance of 7,000” and only reported the three cases of COVID-19 to “determine whether there is an outbreak,” the paper still used that label. Jenna Ellis, attorney for MacArthur and Grace Community Church, denounced the article, undercutting its biased framing in a statement. “Three very mild positive tests among more than 7,000 people is hardly news. 0.0004 or 0.043% is not an ‘outbreak,’”  she said. “The LA Times and others’ grossly misleading and fear-mongering headlines aim to mischaracterize Grace Community Church as irresponsible and a superspreader.” 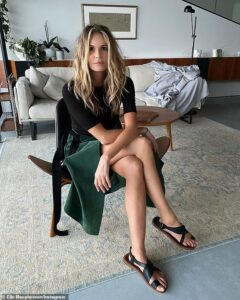 ‘It’s ineffective and dangerous’: Elle Macpherson comes under fire for promoting colloidal silver – a ‘toxic’ substance that can turn the skin blue Elle Macpherson has come under fire by health experts for promoting a ‘toxic’ and ‘fatal’ substance, colloidal silver, that can permanently turn the skin blue. As reported by The Sunday Telegraph, the Australian supermodel, 56, promoted a recipe to ‘take one drop of coated silver in water each day’ on Instagram on Friday. Professor of medicine John Dwyer told the publication this week: ‘It’s ineffective and dangerous, and anyone who uses it is foolish and has been poorly advised.’ Colloidal silver is a liquid containing tiny silver particles, that is often used to treat burns, skin wounds and infections. Products containing colloidal silver can be purchased as homeopathic remedies or dietary supplements in the United States and Australia. However, it is mostly used for medical purposes. On her Instagram Stories on Friday, Macpherson encouraged her followers to ‘take one drop of coated silver with water each day’. The entrepreneur, nicknamed ‘The Body’ by Time Magazine in 1989, went on to describe silver as ‘one of the noble and sacred metals’. One side effect however of colloidal silver, is that it can result in argyria – a condition where the skin permanently turns a grey or blue shade. Professor Dwyer told The Sunday Telegraph that colloidal silver ‘can be toxic’ and to not rely on celebrity health recommendations. 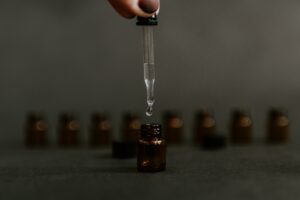 FDA Changes Enforcement Policy for Homeopathic Drugs Today, the Food and Drug Administration (“FDA”) announced it is withdrawing the Compliance Policy Guide (“CPG”) entitled, “Conditions Under Which Homeopathic Drugs May be Marketed,” which was issued in 1988 and describes the agency’s enforcement policy for such products.  The withdrawal is applicable today.  The FDA is implementing a risk-based enforcement policy in its place.  Homeopathic drugs that pose a potentially higher risk to public health will be prioritized for enforcement. The federal Food, Drug, and Cosmetic Act (“FDCA”) does not distinguish between homeopathic and allopathic drugs.  Under the FDCA, unless an exception applies, a “new drug,” including a “new drug” that is also a homeopathic drug, must be FDA-approved to be lawfully marketed.  See 21 U.S.C. § 355(a) (requiring drug approval for a new drug); id. at § 331(d) (prohibiting the introduction or delivery for introduction into interstate commerce of any unapproved new drug).  Since the FDA issued CPG 400.400, however, the FDA has exercised its enforcement discretion with respect to unapproved homeopathic drugs that complied with its terms.  In other words, unapproved, new homeopathic drugs that were marketed in accordance with CPG 400.400 did not face enforcement action on the ground that they lacked FDA approval in violation of the FDCA.  The withdrawal of CPG 400.400 signifies a change in the FDA’s enforcement policy. 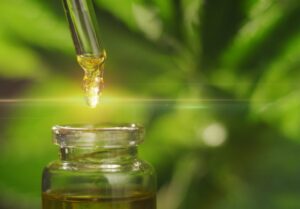 Study: CBD may help block pain-signalling pathways There’s no shortage of anecdotal evidence about the efficacy of cannabidiol (CBD) for treating pain, but a new study offers further scientific insight into how the compound interacts with nerve cells. Published in the Journal of Pain Research, the study suggests that CBD may help block pain-signalling pathways. Researchers found that lab-cultured rat neurons treated with CBD were less sensitive to capsaicin, the active compound in chili peppers. The nerve cells treated with CBD saw an influx of calcium and reduced levels of the pain-signalling molecule cAMP, a key signalling molecule in the pain pathway, reports Imperial College London. Researchers believe this might help explain the therapeutic effect of CBD in patients with acute and chronic pain. The study was led by Mikael Sodergren, a senior clinical lecturer at the university, a hepatobiliary consultant and a pancreatic surgeon at Imperial College Healthcare NHS Trust. Sodergren is currently leading research, from pre-clinical to clinical studies, focusing on cannabis-based products to treat pain, inflammation and cancer. Medical cannabis became legal in the U.K. in 2018, but advocates say it is difficult to access and prohibitively expensive. 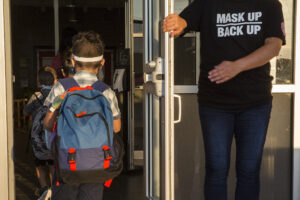 CT Freedom Alliance, CT parents file suit against CT Dept. of Ed over mask requirement in schools The CT Freedom Alliance LLC and four Connecticut parents and their children filed a lawsuit against the CT Department of Education and Education Commissioner Miguel Cardona Tuesday over the school mask mandate. Does wearing a mask at school violate students’ rights and violate state law? A group of parents and legal experts say so. The CT Freedom Alliance reports that they and their clients have filed suit because, they say, the Dept. of Ed and Cardona “have violated state law and the Connecticut Constitution in issuing the school mask mandate on the basis of no legal authority, either in statute or in regulation.” The plaintiffs allege a denial of equal access to education, denial of due process, and claim negligence because “the Defendants have caused, or are likely to imminently cause, physical harm to the Children, and emotional distress and harm to the Children and the Parents.” In a statement regarding the lawsuit, CT Freedom Alliance says science proves masks and face coverings are ineffective at preventing the spread of COVID-19, and that the extended wear harms children. 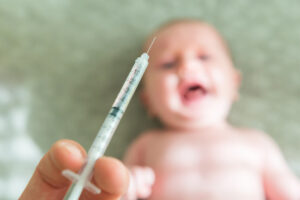 Why Americans Fear They’re Playing Vaccine Roulette DPT: Vaccine Roulette. In April 1982, these words were emblazoned on television screens across America. They were accompanied by the sound of a beating heart, against the backdrop of images of children with severe disabilities, ranging from withered arms and legs, seizures and varying degrees of developmental delays. The children were purportedly damaged by a vaccine. The documentary, DPT: Vaccine Roulette, blamed the pertussis portion of the combination diphtheria, pertussis and tetanus vaccine — a routine part of childhood vaccination schedules — for causing permanent brain damage. The documentary was a sensation, and triggered a nationwide wave of investigative news stories, congressional hearings and the rise of anti-vaccine consumer advocacy organizations across the country. DPT: Vaccine Roulette was a turning point, according to Paul Offit, a pediatrician and director of the Vaccine Education Center at Children’s Hospital of Philadelphia. Offit has authored numerous books about vaccines including Deadly Choices, which detailed the roots of the now-pervasive anti-vaccination movement. “That documentary gave birth to the idea that DPT caused permanent brain damage and that a vaccine could cause harm,” Offit says. “Companies got hit with enormous lawsuits and a lot of them stopped making vaccines — and we almost lost vaccine manufacturing here in the U.S.”

‘Toxic’: CDC staffers say morale inside the public health agency has plummeted during the pandemic Months of mixed messages, political pressure and public gaffes about Covid-19 have caused morale at the Centers for Disease Control and Prevention to turn “toxic,” said four current and two former CDC staffers, one of whom said the election could be a “tipping point” for a mass exodus if President Donald Trump wins. “The house is not only on fire,” said a veteran CDC staffer who did not want to be named for fear of retribution. “We’re standing in ashes.” Current and former CDC employees said that career staffers are still struggling to influence key decisions about the pandemic as new daily Covid-19 cases soar nationwide but that they are overruled by Trump appointees when politics intrudes. Most recently, they said, they wanted to extend the “no sail” order for cruise ships through February. It had been set to expire four days before the Nov. 3 election. Instead, they say, Vice President Mike Pence’s office pushed for the order to expire, which stands to benefit 21,000 cruise industry workers in the swing state of Florida. 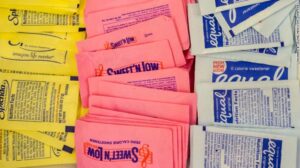 Diet drinks linked to heart issues, study finds. Here’s what to do If your heart goes pitter-patter for diet beverages, it may not be due to love. Artificially sweetened beverages, a new study has found, may be just as bad for your heart as the sugar-laden kind. “Our study suggests artificially sweetened beverages may not be a healthy substitute for sugar drinks, and these data provide additional arguments to fuel the current debate on taxes, labeling and regulation of sugary drinks and artificially sweetened beverages,” said lead author Eloi Chazelas, a doctoral student and member of the nutritional epidemiology research team at the Sorbonne Paris Nord University, in a statement. “We already know that sugar-sweetened beverages are bad news when it comes to cardiovascular and other health outcomes,” said cardiologist Dr. Andrew Freeman, co-chair of the American College of Cardiology nutrition and lifestyle work group, who was not involved in the study. For example, compared to women who drink sugary sodas, sports drinks and juice less than once per month, a 2019 study found women who had more than two servings a day — defined as a standard glass, bottle or can — had a 63% increased risk of premature death. Men who consumed more than two servings had a 29% increase in risk.