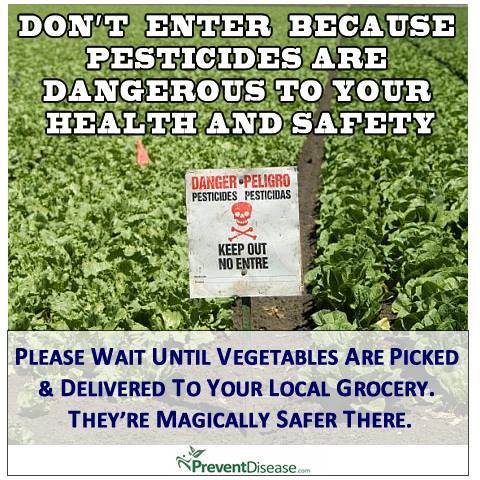 A recent article in The Atlantic reveals highly toxic pesticides are being used on illegal pot farms in California, and the runoff is poisoning forests.

I’ll quote extensively from the article and then make comments:

“Secret growers are taking advantage of the state’s remote stretches of public land—and the environmental impact is severe.”

“The lethal poisons growers use to protect their crops and campsites from pests are annihilating wildlife, polluting pristine public lands, and maybe even turning up in your next bong hit.”

“…grow sites tested positive for carbofuran, a neurotoxic insecticide that is so nasty it has been banned in the U.S., Canada and the EU. Farmers in Kenya have used it to kill lions. Symptoms of exposure range from nausea and blurred vision to convulsions, spontaneous abortions, and death….”

“Some 50 different toxicants have turned up at grow sites… Growers use the poisons to keep rodents and other animals from eating the sugar-rich sprouting plants, from gnawing on irrigation tubing, and from invading their campsites in search of food. Acute rodenticides cause neurological damage and internal bleeding. Animals literally drown in their own blood or stumble around until they’re eaten themselves, passing the poison up the food chain to predators like owls and fishers.”

“’It’s a massive problem,’ says Craig Thompson, a wildlife ecologist with the U.S. Forest Service. ‘People don’t tend to grasp the industrial scale of what’s going on. There are thousands of these sites in places the public thinks are pristine, with obscene amounts of chemicals at each one. Each one is a little environmental disaster’.”

“Gabriel [biologist] and Thompson fear the poisons could spread far beyond each grow site and contaminate the water supply of towns and cities far downstream. The toxicants can leach into the soil and linger for years. Using water monitors, Gabriel has already found organophosphates—nerve agents used to make insecticides and certain types of chemical weapons—several hundred meters downhill from grow sites.”

“’These guys aren’t growing for the legal recreational market or medical dispensaries—they’re growing to exploit a black market somewhere,’ says Mark Higley, a wildlife biologist with the Hoopa Tribe in Humboldt County, whose reservation has seen an explosion in illegal grow sites. While there is no proof that illegal pot ends up in the burgeoning legal market, many familiar with the industry suspect it does.”

“Law enforcement officials think many trespass grows are set up [on government land] by Mexican drug cartels, which prefer to ship marijuana from state to state rather than smuggle it over the international border. Growers arrested during raids are often undocumented immigrants in their 20s from Michoacan, experienced in covert agriculture and hard living. They earn around $150 a day for two-to-four months, much more than they would at a farm or winery.”

“Captured growers sometimes claim their employers are holding their families hostage until the harvest is collected. Whether or not that’s true, they’re motivated to protect the crop. Hendrickson estimates between a quarter and half of raids turn up some kind of weapon, from crossbows to automatic rifles. He has found elevated sniper positions set up near grow sites.”

“Just walking through rows of plants coated with toxic chemicals can be enough to bring on symptoms like lethargy and headaches—let alone spending hours cutting them down in the hot sun under the wash of a helicopter. Gabriel [biologist] and his employees have started getting monthly blood tests to check for pesticide exposure.”

“Some chemical threats are more immediate. At one site Gabriel was inspecting an unfamiliar container full of aluminum phosphide, a poisonous powder used to kill rodents and insects. It had gasified and built up pressure in the heat of the sun. When he touched it, it exploded in his face. Luckily he was wearing a hazmat respirator.”

“’My biggest fear is that some kid will come across one of those bottles,” Thompson says. ‘Carbofuran is pink, it looks like Pepto, like candy. Can you imagine what a five-year-old would do with that?’”

So the contamination and the poison are in the land, in the water, in animals, and in the marijuana people smoke.

This is not the first time, in recent years, that pot has been found to contain pesticides. A quick search will turn up a number of articles. However, the level of toxicity here in these California pot farms is extreme, to say the least.

Where are the growers buying their banned pesticides? Mexico? On the black market in the US?

How can pot smokers be sure they’re smoking clean product? For example, are legal dispensaries working with proper labs to test many, many samples? In these tests, how many pesticide compounds are covered? How many aren’t?

Over time, stories like the one in The Atlantic come and go, and people forget them. But that would be a mistake.

People who use marijuana often reply to stories like this with the claim they know that a great deal of pot is pure, and their suppliers are ethical. One hopes that’s true, but is it?

If some, most, or all of these highly contaminated pot farms in California are run by Mexican drug cartels, don’t expect state or federal law enforcement to solve the problem. It isn’t going to happen. The resources aren’t there, and neither is the determination.

The government of California considers the state to be a sanctuary for illegal immigrants. So how is the government going to stop some of these immigrants from becoming illegal pot growers who deploy highly dangerous chemicals on a daily basis?

As for the California forests and rivers, government agencies are far behind the curve. The illegal growers are, in effect, staging wide-ranging random attacks on the environment.

This has nothing to do with a “progressive attitude” toward pot.

It has everything to do with criminals seeding the land with poison.

And it is yet one more consequence of the unchecked and unprosecuted growth of the pesticide industry, in which, over many decades, corporations have been manufacturing and selling all sorts of heinous poisons—“better living through chemistry”—reversing centuries of agricultural practice that fed populations good clean food.