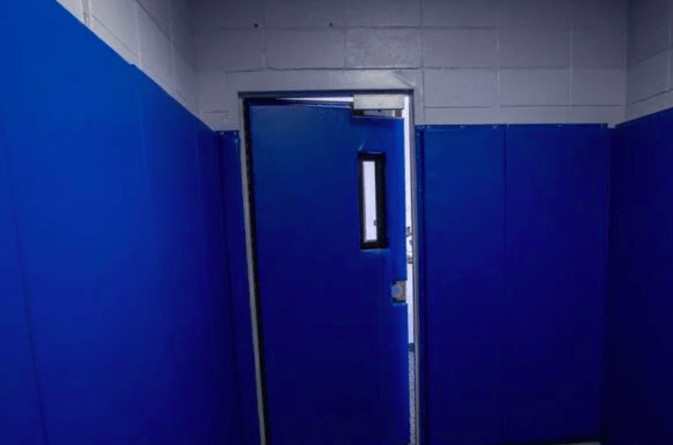 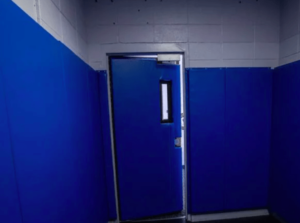 The Quiet Rooms: Children are being locked away, alone and terrified, in schools across Illinois  The spaces have gentle names: The reflection room. The cool-down room. The calming room. The quiet room. But shut inside them, in public schools across the state, children as young as 5 wail for their parents, scream in anger and beg to be let out. The students, most of them with disabilities, scratch the windows or tear at the padded walls. They throw their bodies against locked doors. They wet their pants. Some children spend hours inside these rooms, missing class time. Through it all, adults stay outside the door, writing down what happens. In Illinois, it’s legal for school employees to seclude students in a separate space — to put them in “isolated timeout” — if the students pose a safety threat to themselves or others. Yet every school day, workers isolate children for reasons that violate the law, an investigation by the Chicago Tribune and ProPublica Illinois has found. Children were sent to isolation after refusing to do classwork, for swearing, for spilling milk, for throwing Legos. School employees use isolated timeout for convenience, out of frustration or as punishment, sometimes referring to it as “serving time.” 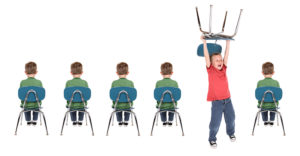 ADHD: Alarms Raised; Risks Ignored When the American Psychiatric Association (APA) released its first Diagnostic and Statistical Manual of Mental Disorders (DSM) in 1952, many of today’s most common pediatric diagnoses had yet to be invented. “Attention deficit disorder” (ADD) did not make its first DSM appearance until 1980, when the APA established it as a pediatric neurobehavioral disorder characterized by problems with inattention, impulsivity or hyperactivity. (ADD’s DSM precursor, “hyperkinetic reaction of childhood,” focused mostly on excessive motor activity.) In 1987, the APA replaced ADD with “attention deficit hyperactivity disorder” (ADHD), which is now the most commonly diagnosed childhood neurodevelopmental disorder. The most recent DSM also allows for a dual ADHD-autism diagnosis, recognizing that anywhere from one-fifth to one-half of children with ADHD meet the criteria for autism spectrum disorder (ASD). 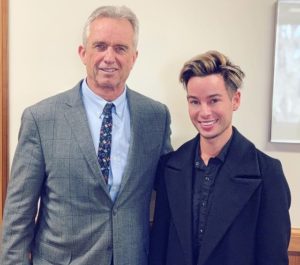 In his roles as a government official or public opinion leader, Lockwood has been instrumental in defeating ballot proposals, candidates and legislation. For example, defeating the single-payer proposal ColoradoCare 80-20 in 2016 to killing a vaccine mandate in Oregon earlier this year. Single press releases have killed legislation. With tweets he’s changed news cycles. He understands guerilla-style politics and how to organize activists to win. Lockwood can enter a disordered political environment and create coalitions, leverage resources and create harmony between different interests. He acts as a conductor on the political stage. Lockwood graduated with a master’s degree in Public Relations & Corporate Communications from Georgetown University and a bachelor’s degree in Journalism, Public Relations from Metropolitan State University of Denver. From his start working as an intern in music publicity to his first job as a press secretary, his decade of experience proves he’s the effective, optimistic and determined leader that builds followings wherever he goes to effect change and help improve society. 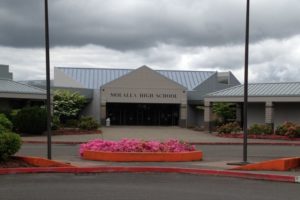 Teachers, Unions Question Molalla River School Board’s Adoption of Controversial Proclamation The Molalla River School Board’s adoption of a controversial proclamation supporting parents’ rights in education may be considered by their union to be a breach of contract and violation of state law, according to an email obtained by the Canby Now Podcast. On Oct. 10, the board of directors passed a resolution proclaiming November Parents’ Partnership in Education Month. The language of the resolution was brief and relatively straight-forward, and appeared aimed at recognizing the important role parents play in their children’s education, as well as encouraging meaningful collaboration between the school district and the families of its students. However, not everyone saw it that way. The Nov. 4 email from Director Jennifer Satter described a phone conversation she had with an employee of the Oregon Education Association (OEA), who represents their local affiliate, the Molalla River Education Association (MREA). “She indicated to me that the OEA considered the board adoption of the Parent’s Rights in Education proclamation not only a violation of our contract with the MREA, but a violation of state law,” Satter wrote. “It is my understanding that they intend to file a formal grievance against the district for what they consider a violation of the contract.” 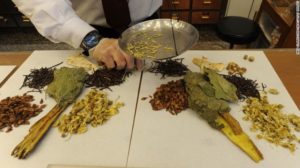 Some European doctors think Chinese medicine should come with a health warning Herbs to increase breast milk supply and heal the spleen. Traditional remedies which promise to cure insomnia and acne. Secret cancer treatments that have been ignored or suppressed by Western medicine. Practitioners of Traditional Chinese Medicine (TCM) have a long history of making outsized claims, not least in the case of fertility and virility, where demand for tiger penis and rhino horn has devastated wild populations. Quackery and false claims exist in all branches of medicine, but doctors in Europe are concerned that unverified claims made under the guise of TCM are being spread worldwide by social media, inadvertently aided by the World Health Organization (WHO). Two leading European scientific and medical bodies say the WHO has legitimized all forms of Traditional Chinese Medicine by including TCM in the upcoming edition of the International Statistical Classification of Diseases and Related Health Problems (ICD), a hugely influential compendium used by health practitioners around the globe. 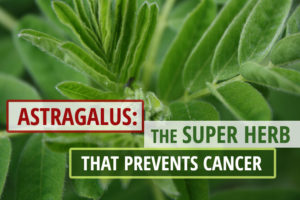 Astragalus: The Super Herb that Prevents Cancer You’ve probably heard of natural cold remedies like echinacea, garlic, and goldenseal. But here is a remedy that may be even better! It’s an ancient Chinese herb called huang qi, which means “yellow leader,” but you probably know it by its more common name… astragalus. Native to China, Mongolia, and Korea, astragalus is an herb that grows up to three feet tall. Known botanically as astragalus membranaceus, the yellow root has various medicinal uses. This super herb has been used in traditional Chinese medicine (TCM) for thousands of years. The University of Texas has shown it to be an adaptogenic herb which enables viruses, bacteria, and even cancer cells to be “picked up” on the immune system’s radar. In one study, astragalus membranaceus was able to restore immune function in 90% of the cancer patients studied! 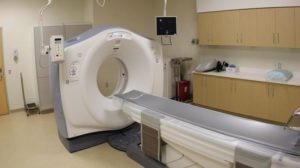 Radiation from CT scans associated with increased risk for cancer A new study in JNCI Cancer Spectrum finds that exposure to radiation from CT scans is associated with higher risks of developing thyroid cancer and leukemia. Researchers here conducted study from a National Health Insurance dataset in Taiwan between 2000 and 2013. The study followed 22,853 thyroid cancer, 13,040 leukemia, and 20,157 non-Hodgkin lymphoma cases. Researchers consulted data from the National Health Insurance program to study demographic and medical information on disease diagnoses, procedures, and drug prescriptions, and the enrollment profiles of all patients. Patients were excluded if they were under 25 years at the time of the cancer diagnosis, had less than three years of follow-up before cancer diagnosis, or had a history of a cancer before the year 2000. Results showed that patients who developed thyroid cancer and leukemia had significantly higher likelihood of having received CT scans. In studies that combined patients across age groups, exposure to medical CT scans was not associated with increased risk for non-Hodgkin lymphoma. However in patients between 36 and 45 years of age, there was a three-fold increased risk of non-Hodgkin lymphoma associated with CT scans. In older patients the association between exposure to CT scans and non-Hodgkin lymphoma was not evident. 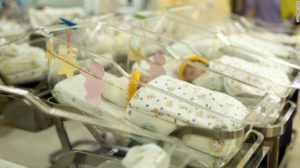 ‘Designer babies’ could be just two years away, expert claims Genetically-modified babies are “highly desirable” to help protect people from disease and could be created ethically within two years, according to a new scientific paper. Gene editing now presents such low risks that it could be used in human embryos, according to an analysis by Kevin Smith, a bioethicist at Abertay University in Scotland, published last week in the journal Bioethics. Advocates like Smith want to change the genetic makeup of embryos to prevent the transmission of gene-related diseases. However, the practice is hugely controversial due to fears that it could be used to create “designer babies” whose genes have been edited for non-therapeutic purposes. In November 2018 Chinese scientist He Jiankui sparked outrage after announcing he had created the first genetically-modified babies in the world from embryos altered to make them resistant to HIV.

But Smith says their creation is ethically justifiable and would offer hope to parents at risk of transmitting serious genetic disease to their offspring, according to a statement. 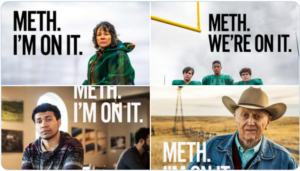 South Dakota spends nearly $500,000 on anti-meth ad campaign with tagline “meth – we’re on it” South Dakota’s Department of Social Services has spent nearly half a million dollars on an anti-meth ad campaign with the tagline “Meth. We’re On It.” (Article by Paul Joseph Watson republished from Infowars.com) No, this is not The Onion. “The campaign’s motto features the phrase, “Meth. We’re on it,” over an outline of South Dakota, and the ad and posters feature people of differing in ages and races saying, “I’m on meth,” reports the Argus Leader. A video shows Governor Kristi Noem telling the camera, “I’m on meth,” before she explains that “on it” means “on the case of meth.”

If you're having a rough day, just remember you're not the governor of the state of South Dakota. The state launched a new campaign called "ONmeth" about battling meth addiction and apparently the tagline is "Meth. We're on it." pic.twitter.com/Gx72LSEIxa

What is your thoughts on the https://ionexx.com/ionx.html

How do I get the instructions for how to do the colloidal silver and aloe gut cleanse?

Thank you in advance for your time.