Have you ever wondered how the freest and most advanced nation on the planet could end up with such a dysfunctional health care system? The people of the United States lead the world in taking drugs for which there is no recognized deficiency. Doctors wrote over 4 billion prescriptions for drugs in 2011 alone!

While I greatly appreciate the advancements in emergency/trauma medicine over the last 100 years, much of the rest of allopathic medicine appears invested in management of diseases that it may actually be causing. The journal of the American Medical Association (JAMA) published a report acknowledging that FDA–approved drugs killed between 106,000 and 225,000 American each year. The current system is designed to be profitable only as long as doctors are willing to write prescriptions for expensive patent medicines. Would you give Nexium to a kid with a bellyache who just ate 5 ice cream sundaes? Or would you encourage him to eat more responsibly?

I often refer to the medical industry as the “Church of Pharmaceutical Mysticism” with medical doctors operating as priests within a dogmatic drug-pushing belief system. Although for most Americans it feels as if it has been this way forever, modern medicine has only been around a little over 100 years, while traditional medical systems such as Chinese and Ayurvedic medicine have been in use for 3,000 to 5,000 years.

Homeopathy, originating in Germany in the late 18th century, is a global medicinal system in use for over 200 years and is recognized as an approved natural drug system in America since passage of the Food, Drug and Cosmetic Act of 1938. Chiropractic and naturopathic medicine have been utilized for over 100 years, and of course, people have been using herbs and food-based remedies since the beginning of recorded history. Yet, 21st century government-mandated insurance schemes are written as if there are drugs and nothing else. How did we get here?

Around 1900, the American Medical Association (AMA) was a weak organization with little money and little respect from the general public. Chiropractic had just been introduced into the mainstream, homeopathy was thriving, herbalists were flourishing, all the while regular doctors were unable to profit from their medical practices.

The AMA established a Council on Medical Education (CME) in 1904. This council’s stated mission was to “upgrade medical education” – a seemingly noble goal. However, the CME had actually devised a plan to rank medical schools throughout the country, with guidelines designed to curtail the teaching of anything except the emerging medicines of the petrochemical industry. If your medical school included the descriptive word “homeopathic” in its name, its ranking would be reduced because the AMA asserted that such schools taught “an exclusive dogma.” It just wasn’t the exclusive dogma that profited the members of the AMA.

However, by 1910, the AMA was out of money and didn’t have the funds to complete the project. The Rockefellers had joined forces with the Carnegie foundation to create an education fund, and they were approached by N. P. Colwell (secretary of the Council on Medical Education) to finish the job they had started, but could no longer fund. Rockefeller and Carnegie agreed. Simon Flexner, who was on the Board of Directors for the Rockefeller Institute, proposed that his brother, Abraham, who knew nothing about medicine, be hired for the project. Who knew at the time that those two brothers would do more to change the 20th century than even the Wright Brothers!

Despite his lack of medical knowledge, Flexner planned to restructure the AMA and certify medical schools based solely upon his recommendations. Eventually, Flexner submitted a report to The Carnegie Foundation entitled “Medical Education in the United States and Canada,” which is also known as the “Flexner Report.” As expected, the report determined that it was far too easy to start a medical school and that most medical schools were not teaching sound medicine. Translation: They weren’t teaching enough of a drug intensive system (made by the companies owned by Carnegie and Rockefeller).

With the AMA grading the various medical colleges, homeopathic colleges, even the large and respected ones, were forced to stop teaching homeopathy or die from lack of funding. This impacted the teaching of naturopathy and eclectic medical schools in the same way. Destroying the teaching institutions that would have carried them forward into the modern era efficiently eliminated competition to patent medicines.

With public backing secured by the publication of the Flexner Report, Carnegie and Rockefeller commenced a major upgrade in medical education by financing only those medical schools that taught drug-based medicine. 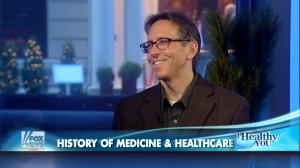 By 1925, over 10,000 herbalists were out of business. By 1940, over 1500 chiropractors would be prosecuted for practicing “quackery.” The 22 homeopathic medical schools that flourished in 1900 dwindled to just 2 in 1923.  By 1950, all schools teaching homeopathy were closed. In the end, if a physician did not graduate from a Flexner-approved medical school with an M.D. degree, he couldn’t find a job as a doctor.

How did we get here? We abandoned our rich history of natural medicine in America a long time ago. It’s time to bring it back! Don’t wait for empty promises from politicians and research institutions funded by the same entities that wiped out all competition to patent medicines. Healing comes from a far higher place. I invite you to join me in bringing the power to heal back where it belongs. Ty Bollinger and I reveal a lot more in Unlock the Power To Heal.

Yours in Health Freedom,