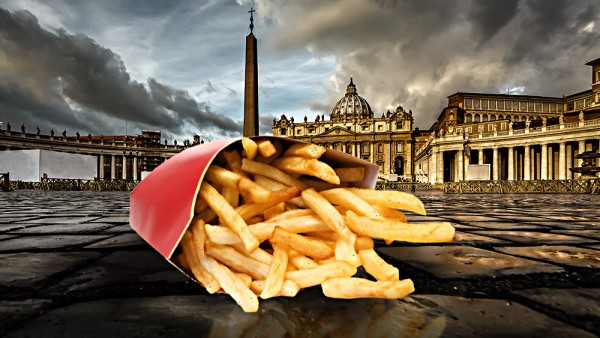 (NaturalNews) In what some are already calling an unholy alliance, McDonald’s has just opened a new restaurant located – of all places – in the Vatican.

Yes, the golden arches have popped up next to St. Peter’s Basilica, and many people are unhappy about the fact, arguing that the fast food giant has no place in such a spiritually significant and historic setting.

Critics of the Vatican’s agreement to lease the property – located about 100 yards from the Vatican State – include high-ranking members of the clergy.

“When plans for the McDonald’s, known as the McVatican, were announced in October, Cardinal Elio Sgreccia told La Repubblica that the restaurant was a ‘disgrace’ that served ‘food that I would never eat.’ He added that the money spent on renting the real estate, for which McDonald’s is shelling out roughly $31,000 per month, should be used to help the poor instead.”

Placing a McDonald’s in such a location seems incongruous on so many levels. It does reek of blasphemy to open such a modernist monstrosity next to some of the world’s most revered architectural marvels, and to even consider serving Big Macs and McNuggets in the culinary paradise that is Rome should be classified as a punishable offense.

“It’s a business decision that ignores the culinary tradition of Roman cuisine,” said the cardinal.

Others echoed Cardinal Sgreccia’s sentiments, including a citizens group which is protesting the McDonald’s opening over its potentially negative impact on the cultural ambiance of the area.

“The Committee for the Protection of Borgo was the first group to raise the alarm over the proposed restaurant. It said the fast food chain would distort the area and inflict a ‘decisive blow on an already wounded animal’ given the abundance of mini-markets and stands selling religious trinkets in the area.”

In fact, the area around the Vatican is already home to several fast food outlets. There’s a McDonald’s near the Vatican Library and another one 200 yards away from that one (with a Burger King located in-between).

What makes this McDonald’s unique is that it is located on Vatican-owned property – which, incidentally, formerly housed a religious bookstore. Critics say the property should be leased to an entity more in line with the Catholic Church’s mission, or at least one that reflects the neighborhood’s cultural heritage.