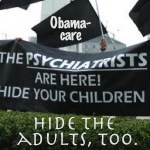 Obama, in the wake of the Sandy Hook massacre, stated that mental-health services must be made more available, presumably to stave off future killers.

Of course, this is monstrously wrong, since so many killers have acted under the compelling influence of SSRI antidepressants and other brain meds.  The drugs are known to induce violence.

Now we hear that Joe Biden’s presidential task force on gun control is meeting with psychiatrists.  Here is what they’re discussing:

Databases.  They want to tighten background checks on people who buy guns, and the checks could include discovering whether applicants have ever been under psychiatric care, and if so, what diagnosis(es) was made.

In order to do that, there will have to be a comprehensive database and a tracking system that extends into, and from, every psychiatrist’s front desk.  Law-enforcement will have access to that database.

What happened to doctor-patient confidentiality?  It’s possible this issue can be skirted merely by affirming that a gun-applicant has seen a psychiatrist at some point in time—which fact could exclude him from purchasing a weapon.

Organized psychiatry would, of course welcome a comprehensive database of Americans who have obtained psychiatric care.  It makes their profession seem even more official than it already is.  And it imparts a tinge of USSR-like power.

The implication: “We know who you are.  We know you’ve been under the care of a psychiatrist.  Wherever you live and work, we can call you crazy if we want to.”

This always was part of the psychiatric agenda, behind the smooth facade of “offering help to those in need.”

The American Psychiatric Association (APA) is also sensitive to the fact that many Americans would never walk into a shrink’s office if they thought that would hinder their chance of owning a gun.

But weighing the pros and cons, the advantage is on the side of linking gun-ownership-refusal with psychiatric-treatment history.  That makes the APA more powerful.  It brings them closer in concert with law-enforcement.

It essentially makes the APA and all its doctors into cops right along side local police forces, state police, the FBI, the ATF, DHS, and the US Marshals Service.

Who could resist that promotion?

Of course, in any case involving a murderer, where it’s suspected that a psychiatric drug induced the violence, unearthing that possibility would be cut off at the pass.  The sordid facts would be protected/buried by the full force of the federal government. Another perk.

Local mental-health clinics (drug dispensaries) would bloom like weeds.  After all, how are you going to prevent violence unless you corral millions more Americans and put them in front of a shrink or a suitable surrogate for “pre-screening?”  It’s The Minority Report come to life.

This system eventually burgeons into a full national program to cut violent crime through prevention.  And who will be in charge of making delicate judgments about the likelihood that any person will commit murder?  The psychiatrists, naturally.  More power for them.

This goes beyond deciding whether a resident of the US can own a gun.  It invades any aspect of a person’s life to assess his “mental predisposition.”  That’s precisely the kind of infrastructure that would come into being.

Don’t imagine for a moment that psychiatrists actually have the ability to make scientific calls on these questions.  Their entire pantheon of 297 official mental disorders is such a pathetic fraud that not one physical test exists to make a diagnosis.

No blood test, no urine test, no saliva test, no brain scan, no genetic test.

But that’s never stopped them before, and it wouldn’t stop them in the new Psychiatric Police State.  They’d keep winging it, and they’d realize they have to err on the side of caution, to avoid getting caught with their pants down, when a killer is found to have received “clearance” from a psychiatrist to own a gun or walk around unsupervised.

Therefore, many more Americans would be marked down for “special tracking” and mandatory 72-hour holds in mental lockups.

While in such custody, the strategy would be to load up the patient with as many drugs as possible, to render him docile after release.

Is this entire nightmare scheduled to happen this year?  Of course not.  But gradual steps eventually add up to a fully boiled frog.

In the world of brain research, the principal push is toward creating the conditioned human.  Behind the mask of curing disease, that’s the real agenda.  And it ties in quite nicely with a culture in which every human is looked upon as a potential threat to life and limb of his fellow humans.

Biden and Obama are trying to make a definitive move to take away guns.  But for the psychiatrists, this is a trial balloon.  Inside the profession, there will be debates about whether linking gun ownership to psychiatric history is a plus or a minus for shrinks.

Will it enhance or injure their reputation and standing?  What about doctor-patient confidentiality?

But the first steps are being contemplated.  The issue is on the table.

In the “old psychiatry,” before smooth PR and modern marketing really took over, doctors were far more ready to make predictions about the future political ramifications of their work.  Absolute madmen like Dr. Jose Delgado and Dr. Ewen Cameron went public with the idea that no human being has an inherent right to his own personality.

The true role of psychiatry, they asserted, was to re-invent human character, personality, behavior, and thought, from the ground up.

Well, decades later, with psychiatry and pharmaceutical companies tied to the hip as one juggernaut, and with marketing departments modulating their pronouncements to fit these times, a redux- prospect is emerging.

Psychiatry can pick up its old political and social banners again.  It can enter into an even closer embrace with big government.  It can announce that violence can be substantially curbed through an expansion of mental-health services.  It can frame this program as both a humane necessity and a leap ahead into “a better world for all of us.”

It can begin, cautiously, at first, to bring back the utopian promises.

“We have the science.  Our understanding of the brain is expanding every day.  We’re literally seeing why and how conflict arises between people, and we’re seeing it in the folds and channels of that wondrous brain.  And we can do something about it.  We’re on the cusp of a new dawn…”

Yes, the psychiatric police are ready to take the next step.

Meanwhile, behind certain closed doors:  “Gentlemen, it’s interesting, isn’t it, how so many killings over the last twenty years have been committed by people under the influence of our drugs.  And yet, we use the murders to prove how people need more of these same drugs.  Sales skyrocket.  And now we can become plainclothes cops with more ultimate power than any cops in history…”