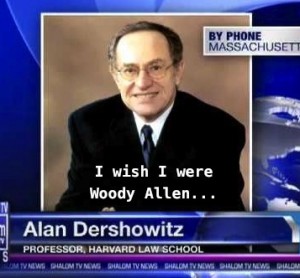 All Alan needed to do was muss his hair a little and he would have been the neurotic NYC Jewish intellectual Woody Allen played and parodied in five hundred of his early movies.

“I mean…the man (Alex) is scary.  He never read Kierkegaard or Heidegger and yet,…he gives off this flavor, this effluent, of being a real existentialist, but he backs it up with Gatling Guns… This isn’t coming from Columbia or Harvard or Sartre.  It’s right out of Mein Kampf or something.  He’s like a Norman Mailer from Texas.  I refuse to go to Texas.  I’m afraid they’ll pump gas into my mouth and feed me to their wild dogs.  I hear in Texas, if you read an actual book all the way through, they take you out at night and castrate you on the prairie.  A friend of mine once went to Texas and never came back.  Just disappeared.  A few years later, his sister got his thumb in the mail…”

Alan did the I’m-really-sort-of-scared-of-the-man (Alex) quite well.  Concern, worry, a tinge of fear, as if he were watching a tiger on 59th Street heading toward the Hotel Pierre after escaping from the Central Park Zoo.

Well, Alan’s a high-priced lawyer.  He knows roles.  In 1986, when Reversal of Fortune, the film about the Klaus von Bulow murder trial, was being cast, Alan, who was a featured character, wanted Woody to play him.  Woody declined, and part went to Ron Silver.

“Really…I’d be scared to be in the man’s (Alex’s) home.  If I disagreed with him about something, he might cook me on the grill in the back yard and call his pals over to chew on my liver.  Don’t they have a law in Texas where you can file a petition to suspend cannibalism laws in special cases?  I head about a trial where the judge allowed a hunter to eat his neighbor’s leg because the guy lost their deer that was strapped to the roof of his van.  They don’t teach Evolution in Texas because there isn’t any.  When the sun sets, half the population crawls back into lakes and ponds to breathe through their gills.”

Then Piers says, “No, Alan, the thing that really scares me about people like him (Alex), is…”

Then Alan says, “No, Piers, the issue with people like this really is…”

The top each other for several rounds, plumbing the depths of Alex’s fearful demeanor,, and it’s a wrap for another show on CNN, the most trusted name in networks with no ratings.

Bring him back.  Prop his suspendered corpse in the chair and let him interview OJ’s fourth cousin and Carol Burnett’s costume designer.

If Piers doesn’t want to go back to England and talk about phone-hacking scandals, he can shovel out what’s piled high and deep in the CNN studio every night.