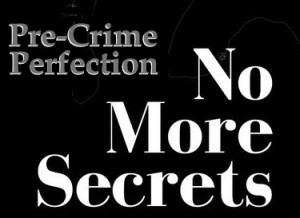 Where do these insane professors come from?  Maybe they’re hatched from eggs in a lab.  The neuroscientists, in particular, are prime candidates for the funny farm

One wants the human brain to be recast as a hologram and planted in a robot.  Another wants the robot to be made out of pure energy.

But Professor Michael Persinger, of Laurentian University in Canada, is promoting a utopia in which everyone’s thoughts are made public.

Of course, Persinger hopes humanity will embrace the notion voluntarily.  I think.

In his lecture, “Just Suppose You Could Know What Others Are Thinking: No More Secrets,” Persinger tells us that utopia is just one step from creation.  All we have to do is allow all our thoughts to be made public.

Brain-mapping, electronic translation of thoughts into digital form? A master library where we can tap in and find out everything David Rockefeller or a janitor at Yankee Stadium is thinking and has thought?  Or maybe Persinger thinks we’ll do this telepathically.  If so, it sounds strenuous.

Of course, thoughts don’t equal action.  But in this age of thought-crime, does it matter?  If it’s discovered that a housewife in Little Rock was thinking, for three seconds, about killing the president of Egypt at 3:57 on a rainy Tuesday, between thinking about the frosting for a cake and getting the brakes fixed on the SUV, why she’s an open book.  She’s a potential killer, right?

Then, at her next dinner party or picnic, her friends can ask her whether she’s planning to carry out the hit with a Glock or a drone.

And if the president of the United States, after a meeting with the Joint Chiefs, thinks he wants to bomb England, that’s the top headline in the Washington Post.  Of course, he thought about the attack for a tenth of a second, and his next thought was about having sex with Angelina Jolie, and this was followed by a thought about pizza.

It’s all in the master library, and we can all tap in, and that’s utopia.

Then there is this: suppose someone hacks into the library and inserts thoughts for you you never had?  For example: it’s falsely claimed you thought about declaring war against all gay men on the planet.  Might that cause a ripple?

The purely technical aspects of translating all the thoughts of ten billion people into a readable library are, I must say, absurd.  How many thought-impulses does one person generate in a 24-hour span?  Even the dullest among us must rack up at least a million.

Eventually, somebody would come up with an algorithm and a computer model to highlight “certain thoughts that are more important than others.”  And after a decade or so, it would be discovered that these models were wrong, useless, and politically motivated.

But not to worry.  The whole point of Professor Persinger’s program is the elimination of secrets and privacy.  The very existence of the program would force people to admit “we’re all liars,” because we don’t say everything we think.  And this would be good, because then we would become suitably humble, passive, and non-threatening.  We would become meek, submissive, and universally tolerant.

And the people controlling the whole system (who can have their own thoughts fabricated or blocked) would have a very simple time controlling us.  Yes, it’s perfect.

If you want complete fascism.

Thanks, professor.  We’ll take up your proposal at the next meeting of the Looney Tunes Society.

And by the way, who says thoughts are stored in the brain?  Who says brain is the same thing as mind?

Professor Persinger has published widely during his long career.  He’s written papers on telepathy, remote viewing, and the induction of spiritual experiences through electromagnetic stimulation.

This last area of research is particularly significant.  It reveals the neuroscience bias toward assuming all “non-scientific” experience comes from physiological causes.  In other words, everything we do, think, feel, or say is completely grounded in the physical.

This version of materialism is the justification for managing and manipulating human life.  If we’re only biological machines, as these researchers assert, what difference does it make how we’re re-engineered?

If all our thoughts can be made public and universally available, why not do it?  Why not wipe out all privacy and create the ultimate capstone on the Surveillance State?

Naturally, we believe proposals like Persinger’s are ridiculous and would never be implemented.  But back in the day when the FBI was obtaining an occasional warrant to wiretap a suspect, who imagined we would come to a time when our every electronic communication would be collected, sorted, and scanned by government agencies?