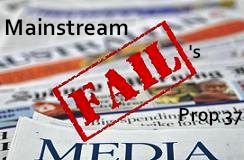 No, this wasn’t a group of street thugs breaking into a liquor store.  This was a string of reporters trying to destroy the truth about a subject that threatens the health and future of the planet’s population: GMO food.

They did it in serial fashion over the phone, on a press-conference call organized by supporters of YES ON 37.  The California ballot measure that would force sellers to label their GMO food “genetically engineered,” to allow consumers the right to know and choose.

I was on the call, and I was stunned by the parade of morons from the press who were obscuring the main issue and complaining and whining about the definition of word “investigation.”

It was miles and miles through the looking-glass.

To begin with, Joe Sandler and Andy Kimbrell, lawyers supporting Proposition 37, laid out a convincing case for fraud on the part of the NO ON 37 group, who are funded by pesticide and biotech interests.

The charges: NO ON 37 had used, in their ads, the official seal of the FDA, a felony.  They attributed statements to the FDA, Stanford University, the World Health Organization, the National Academy of Sciences, and the Academy of Nutrition and Dietetics which those organizations had never made; statements that would convince voters to turn down Prop 37.

Sandler, Kimbrell, and others from the YES ON 37 camp further stated that these organizations had gone on the record denying they had ever made those statements.

Finally, the YES ON 37 representatives clearly asserted that the NO ON 37 forces had made false assertions in the California Voter Guide, which is sent to voters to help them understand arguments for and against ballot propositions.  This would be another felony.

You can read the specific NO ON 37 deceptions here:

Then came the time for questions.  Suddenly, the mood changed.  It changed because the press-conference organizers had publicized the event by claiming the FBI had opened an investigation into the NO ON 37 forces.

Reporters wanted to know whether there was really an FBI investigation.  Joe Sandler and Andy Kimbrell explained there was.  Sandler remarked that he had received a call from an FBI agent, Jason Jones, after a complaint had been sent to the Dept. of Justice.

The complaint detailed the false assertions in ads and in the Voter Guide.  The FBI agent gave the impression that the FDA would be consulted, to see if they knew their official seal had been used by the NO ON 37 organizers.

But, whined a reporter, is that really really an investigation?  One by one, reporters from the LA Times, the NY Times, and other papers wanted to get into a Talmudic hair-splitting conversation about the use of the word “investigation.”  LA and NY Times reporters stated they had contacted the Dept. of Justice and learned no investigation had been launched.

Sandler said: look, a complaint was filed; an FBI agent followed up on it; the agent said the matter would be looked into.

The reporters were not assuaged.  They kept chewing on the word “investigation.”

What shall we call it?  An investigation, an inquiry, a preliminary fact-gathering expedition, an active concern, a mission to Mars, a ham sandwich, a kick in the ass?  Who cares?

The YES ON 37 people had just exposed grievous and explosive lies and crimes by the forces who don’t want consumers to know whether the food they’re eating is engineered or GM-free.

That’s not a good enough story for the LA Times or the NY Times?  That’s not a page-one ripper?

No, it’s not.  It’s not because the reporters would actually have to THINK, and God forbid, COMPARE, in order to carry the ball themselves.  They’d have to compare the statements made by NO ON 37 people against the truth, and they’d have to write more than: “FBI opens investigation.”

This is how these dancing monkeys operate.  With the least possible amount of work.

And this is just on Level One.  On Level Two, we would look into the preconceived media bias in favor of GMO food and no labeling.

But here, I’m just giving you the details of the press conference and the idiots who make up the press, the press that is dying, day by day, as the pages of their papers shrink and their ad revenues dry up and their jobs go away and their fate opens up an abyss before their eyes.

The reporter for the NY Times went so far as to suggest that the YES ON 37 PEOPLE really had no right to call the NO ON 37 people deceptive because there was a deception about, yes, THE FBI INVESTIGATION.  It wasn’t actually an official investigation.

This is on the order of: “I drove all the way here to get your pastrami sandwich on a roll and I find out your menu actually says it comes on rye bread.”

To which the proper reply should be: “Your brain is made out of hamburger, so what difference does it make what I say to you?  You’re a public nuisance.  Get lost.”

This is exactly why the public loses faith in major media.  This is why major media has no leg to stand on.

Here is another obvious fact the addled reporters didn’t think about: the NO ON 37 people, with their deep pockets, don’t care that they’re lying.  The election is next Tuesday, and if they face some fines after that, it’s chump change to them.  They want to sink Prop 37.  That’s what they’re focused on.

The press, the fabled Fourth Estate, which is there to protect the public interest, put on quite a display at this press conference.  They whined, they wheedled, they accused, they split hairs, they complained, they obfuscated, they distracted, they diverted, they came across like entitled high-school sophomores who’d just been given their first assignment for the school paper.

The author of an explosive collection, THE MATRIX REVEALED, Jon was a candidate for a US Congressional seat in the 29th District of California.  Nominated for a Pulitzer Prize, he has worked as an investigative reporter for 30 years, writing articles on politics, medicine, and health for CBS Healthwatch, LA Weekly, Spin Magazine, Stern, and other newspapers and magazines in the US and Europe.  Jon has delivered lectures and seminars on global politics, health, logic, and creative power to audiences around the world.  You can sign up for his free emails at www.nomorefakenews.com

One thought on “BREAKING: MAJOR MEDIA TRY TO DESTROY “YES ON 37” PRESS CONFERENCE by Jon Rappoport”