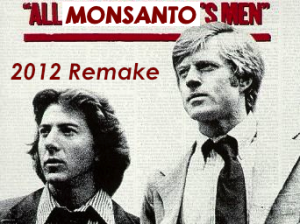 The vote is two days away.  In California, Prop 37 is on the ballot.  It states that all GMO food should be labeled as such, so the consumer can decide whether to buy it and eat it.

The NO ON 37 forces have been caught in a deception.  They used the official seal of the FDA in a mailer, and above that seal they  attributed a quote to the FDA which was never made by that agency.

The quote was: “The US Food and Drug Administration says a labeling policy like Prop 37 would be ‘inherently misleading.’”

The FDA told KPBS they “never made such statements with respect to Prop 37.”

Here’s the capper.  After receiving a complaint about all this, the US Attorney in Sacramento, who works for the US Dept. of Justice, said he would refer the whole matter to the FDA.

The question of whether NO ON 37 committed a crime is not up to the FDA.  It’s up to the Dept. of Justice. Its their investigation.

The FDA isn’t going to arrest anyone at NO ON 37 for stealing its seal or making a false statement over that seal.

If you issued a pronouncement on Dept. of Commerce letterhead under the seal of that agency, would employees of Commerce arrest you?  Of course not.  The FBI (as an agency under the DOJ) would arrest you.

The US Attorney in Sacramento is essentially lying when he implies the FDA should handle the matter of its own seal being used without federal authority.  There is no reason for the DOJ to refer this matter to the FDA.  The DOJ should investigate NO ON 37.  It’s their job.

Two days ago, the YES ON 37 people held what turned out to be an infamous press conference.  As I’ve previously reported, the whole thing degenerated into a hair-splitting argument, when reporters for major outlets like the LA Times and the NY Times demanded to know whether the DOJ had really launched an investigation into possible crimes committed by the NO ON 37 forces.

This distraction torpedoed the press conference.

These brain-addled reporters should have been asking why the DOJ didn’t launch a full-blown investigation and instead referred the matter to the FDA.

The headline on their subsequent stories should have read: DOJ REFUSES TO INVESTIGATE NO ON 37; REFERS INVESTIGATION TO WRONG AGENCY.

But truth isn’t the mission of these quacking ducks.

At the end of All the President’s Men, Ben Bradlee, the editor of the Washington Post, tells his two cub reporters, Woodward and Bernstein: “We’re under a lot of pressure, you know…Nothing’s riding on this except the, uh, first amendment to the Constitution, freedom of the press and maybe the future of the country…”

In this case, nothing is riding on the vote on Prop 37 except the future health of the country, the hidden destructive effects of GMO food, the capture of the food supply by Monsanto and its government allies, and the killing of small family farms.

So let’s stall and cover the wrong story, let’s ignore the underlying issues, let’s let the Dept. of Justice off the hook, let’s allow big pesticide and GMO companies, with their deep pockets, to swing Tuesday’s vote in their favor, let’s subvert the role of a free and vigorous press, let’s fiddle and faddle and take a hands-off attitude and do nothing.

And they call these people reporters.

They’re pernicious scum who bring a boomer indifference and smirking sense of entitlement to their work, which is no work at all.  They’re not good enough to sharpen pencils or clean computer screens in the office of a real newspaper…if one existed.