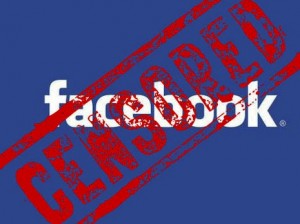 I became aware of the block and censorship a few days ago, soon after I wrote and published the article: “Ruthless State of the Union: current crime boss speaks.”

That article was about Obama, and it was also about every president as far back as Nixon.  It mainly described the absurdities implied by Obama’s vague notion that “we all have to work together.”

Readers began letting me know they couldn’t Facebook-share my articles.  This became: no one could share any article that included: “jonrappoport.wordpress.com.”

As a reporter for 30 years, I know a little about the 1st Amendment.  Criticizing the president, or the medical cartel, or any number of other institutions I’ve taken on is par for the course.  If some Facebook readers are marking these articles spam or abusive, they should think again.

Lots of people these days believe it’s part of the game to try to censor their perceived opponents.  “Why debate or even allow a different voice?  Let’s just block it out.”

Blocking the FB posting of my article links could also be part of the Facebook management purge of political activists, particularly those who defend the 2nd Amendment and private gun ownership.  This happened to a number of people at infowars.com last December, and it also happened at Natural News.

At the moment, I have a workaround in place, and my site and blog are working just fine, but the basic wider issue of blocking dissident opinion isn’t going away.

Some people have pointed out that Facebook is a private company, and therefore it has the right to define acceptable speech any way it wants to. This may be true, but blocking and censoring political viewpoints is a very bad policy.  Claiming, for example, that Facebook is only for making and communicating with friends is a cop-out.  If friends can’t share information about political realities, it’s a hollow situation.

Many reporters, including myself, came to the Internet because we were sick and tired of trying to convince editors at newspapers and magazines that our work should see the light of day.  Editors routinely shot down (and still do) article ideas that wandered too far off the mainstream reservation.

That was the censorship we were leaving in the dust.  Now, here it is again.

Every day, I read articles I don’t like.  The idea of somehow censoring them would be absurd.

In this country (and other countries), we have people who believe in and support free speech.  Then we have True Believers, whose cause in their minds outdistances any considerations about liberty.  They would trample liberty at the drop of a hat to make the world over in their image.  Finally, we have organizations who enter into covert political alliances to advance their own interests.  These organizations also care nothing about the 1st Amendment.

Where is Facebook in all of this?  Are they just a front for gathering personal information on a billion people?  Are they just another wing of the vast surveillance apparatus that is operating from a playbook that wants androids instead of thinking citizens?

It’s time for the bosses at Facebook to step out into the light and explain, in detail, exactly how they block information and on what grounds.  How are reports of spam and “abusive content” processed by their algorithms?  What is their position on the 1st Amendment?

Failure to make this clear is evidence of purposeful concealment.

Perhaps an article I wrote and published last August, “Facebook, the CIA, DARPA, and the tanking IPO,” will help put this situation into perspective:

The big infusion of cash that sent Mark Zuckerberg and his fledgling college enterprise on their way came from Accel Partners, in 2004.

Earlier that same year, a man named Gilman Louie joined the board of the National Venture Capital Association of America (NVCA). The chairman of NVCA? Jim Breyer. Gilman Louie happened to be the first CEO of the important CIA start-up, In-Q-Tel.

That’s not the only connection between Jim Breyer and the CIA’s man, Gilman Louie. In 2004, Louie went to work for BBN Technologies, headed up by Breyer. Dr. Anita Jones also joined BBN at that time. Jones had worked for In-Q-Tel and was an adviser to DARPA, the Pentagon’s technology department that helped develop the Internet.

With these CIA/Darpa connections, it’s no surprise that Jim Breyer’s jackpot investment in Facebook is not part of the popular mythology of Mark Zuckerberg. Better to omit it. Who could fail to realize that Facebook, with its endless stream of personal data, and its tracking capability, is an ideal CIA asset?

But now the Facebook stock has tanked. On Friday, August 17, it weighed in at half its initial IPO price. For the first time since the IPO, venture-capital backers were legally permitted to sell off their shares, and some did, at a loss.

Articles have begun appearing that question Zuckerberg’s ability to manage his company. “Experts” are saying he should import a professional team to run the business side of things and step away.

All this, despite the fact that Facebook’s first posted revenue as a public company has exceeded analysts’ predictions, according to the LA Times.

This has the earmarks of classic shakeout and squeeze play. It’s how heavy hitters gain control of a company. First, they drive down the price of the stock, then they trade it at low levels that discourage and demoralize the public and even semi-insiders. As the stock continues to tank, they quietly buy up as much of it as they can. Finally, when the price hits a designated rock bottom, they shoot it up all the way to new highs and win bi

And they hold enough shares to exert more control over the company itself.

The company is too important as a data-mining asset of the intelligence community to let it fall into disrepair and chaos. The CIA and its cutouts will save it and gain more power over it. It’s what they’ve wanted all along.

From the time Mark Zuckerberg was a child and attended the summer camp for “exceptional children,” CTY (Center for Talented Youth), run by Johns Hopkins University, he, like other CTY students, Sergey Brin (co-founder of Google), and Lady Gaga, have been easy to track.

CTY and similar camps filter applications and pick the best and brightest for their accelerated learning programs. Tracing the later progress of these children in school and life would be a standard operation for agencies like the CIA.

When Zuckerberg founded an interesting little social network at Harvard, and then sought to turn it into a business, the data-mining possibilities were obvious to CIA personnel. Through their cutouts, as described above, they stepped in and lent a helping hand.

Now it’s time for Zuckerberg to pass the baton to his handlers, so they can maximize the economics of Facebook and utilize it to spy even more extensively.

The media will play along, pretending the eventual upswing-recovery of Facebook stock happens for fundamental reasons connected to the company’s “better level of performance.” The media take this approach to every stock and every company, to avoid letting the public know how massive manipulation actually runs these trading markets.

That’s a legitimate question.  My answer is simple.  Since I began working as a reporter in 1982, I’ve used every possible opportunity and venue to put my information out there.

There’s a big difference between that and overtly supporting all those venues.

When I admire a writer, broadcaster, or organization, I say so, and I have.  Even then, that doesn’t mean I have to agree with everything they say or stand for.

That’s a a distinction with a meaning.  It’s exactly the distinction I’m asking Facebook to clarify: what will they allow, whether they agree with it or not?

Do I expect them to spell it out in sufficient detail?  No.  But then that means something, too.

None of this will change one iota of what I write or say.