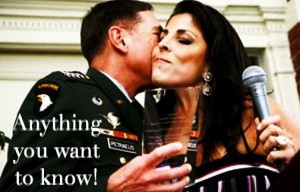 The punchline of this story is an unconstitutional  US imperial war machine, dedicated to empire, contributing to a Globalist planet by destabilizing and causing massive chaos in the Middle East and Africa.

In this criminal effort, one American soldier has stood out above the rest.  He has been made into a heroic myth.  He represents the best of the best.

Seeing his character, his honor, millions of Americans have concluded that whatever our Armed Forces are doing, it must be right and good.

If David Petraeus is our fearless leader, we’re on the side of the angels.

If he succumbed to a moment of misguided passion, we can forgive him.  His grand portrait must continue to hang on the wall.  Petraeus gives legitimacy to war, destruction, empire-building.

He’s the scoop of vanilla ice cream on the poisonous pie.

So the general will be given protection.

An hour ago, he testified behind closed doors, to Congressional committees, claiming he knew, within a day, that the Benghazi attack was launched by terrorists.  So far, reporters’ questions indicate Petraeus won’t be hammered hard about why he has changed his story.  In September, he blamed an anti-Muslim video for the attacks.  Now it’s terrorists.  Incredibly, the protection of the general’s reputation is holding, to this point.

Meanwhile, federal agencies, trying to figure out how deep the Petraeus scandal really goes, are fashioning a cover story, to shield the guilty.

From the NY Daily News: “Reuters reported on Wednesday that investigators found substantial classified information on a computer used by [Paula] Broadwell. According to law enforcement and national security sources, investigators are examining whether the information should have been stored under more secure conditions.”

That’s a double-talk lie.  You don’t need to consult complicated manuals to know that, when you transfer classified information to a place it doesn’t belong, a home computer, you’re already breaking the law.

And when the FBI can quickly find the classified data on the home computer, as they did, you realize it wasn’t buried under sophisticated protection.  So that’s another clear indication of a crime.

You might as well have secret memos lying on the kitchen counter.

It’s obvious the whole Washington establishment and their media allies are lying, too.  They’re trying to stitch together a fake story to cover a horrendous series of security breaches.

And what secrets may sit under those breaches.

For example, was Broadwell, an experienced Army officer, leaving classified data in open view because she was trying to sink Petraeus by association?  Was this part of her plan?  If so, there is little doubt she was involved in a full-scale, long-term operation, whose leaders remain unknown.

Broadwell, whose only visible track record as a published writer, aside from academic papers, was a pair of dry op-ed pieces in the Boston Herald and the NY Times, was suddenly co-writing a biography of the most famous soldier in America.

This is now explained by Petraeus’ sexual attraction to her.  But on her side, she dedicated a tremendous amount of effort to meeting and charming the general.  She traveled to Afghanistan to seal the deal.  It doesn’t require a great leap to suspect she was working a classic honey-trap.

FBI Director Robert Mueller claims he was unaware of an investigation into Petraeus until after the election.  This is about as likely as a drunken sailor climbing the side of the Empire State Building.

Leon Panetta, the secretary of defense, is playing “I know of no other names in the scandal,” as if he’s the executive producer of TMZ, presiding over a tabloid story.  “I only know what I read in the papers,” he says.

Eric Holder, contemplating his next cushy job in the private sector, casually states there were no national-security implications discovered in the Petraeus-Broadwell case.

Holder’s off-the-cuff “final judgment” about national security implications is ludicrous.  In a case with this much potential for leaks of classified data and blackmail, he’s clueless.  He’s just spouting what he’d been told to.

Obama himself is adopting a relaxed attitude.  Commenting on Petraeus at his first press conference since winning reelection, he astoundingly said, “My main hope right now is that he and his family will be able to move on.”  Was he doing a Dr. Phil impression?

Several conservative pundits have speculated that the White House held the Broadwell affair over Petraeus’ head to force him to say, in September, that the Benghazi attack was the result of an amateur film trailer.

A flood of liberal pundits have responded to these claims, calling them woo-woo conspiracy theories.

Neither side is willing to look at the big picture.

And neither side gives a thought to how the intelligence establishment views this scandal, as loud alarm bells keep ringing at Langley.

Let’s see.  Not a CIA agent, but the director of the CIA has a secret affair with a woman who is not his wife.  This woman has a significant amount of classified information on her unsecured computer at home.

She herself is compromised and vulnerable, because she is having an affair with him and she is married.  And no one knows who she might be covertly working for.

Before the CIA director publicly confesses the affair and resigns, he has access to millions and millions of pieces of highly secret CIA data, some of which even the president never gets to see.

No one, however, is particularly worried that the general may have been blackmailed.

What would blackmailers seek to get from Petraeus?

In addition to what knows from his tenure at the CIA, he served at the top of the heap in Iraq and Afghanistan.

He was in Iraq, where billions of dollars in “US aid” went missing.  Who stole the money?  Those names?  An extremely useful nugget, if Petraeus could provide it.

Then in Afghanistan, details on the restructured heroin-trade operation would be another gem.  As would reports on poppy yields and the names of drug warlords who were replacing old mainstays.  Dope Inc. is a trillion-dollar business, and what Petraeus could pass along would rate as prime industrial espionage.  He would know a great deal about US government involvement in drug trafficking.

Then you have oil deals vis-a-vis the hoped-for Afghan pipeline.  Can’t tell the shifting players without a scorecard.  You’ve got newly minted Russian oligarchs, Chinese operatives, competing oil companies, bank financiers, drug kings looking for a place to wash and multiply their money.  Everybody and his brother wants a slice of that action.

Petraeus was there on the ground.  He was connected.  Anything he knew about oil deals would be prized intelligence, useful to a great many competitors.

General MacArthur once said, “Old soldiers never die, they just fade away.”  Now old soldiers reach out for the cash.  The unimaginative ones sit on boards of security companies and defense contractors.  The clever ones dig deeper.  Holding companies, banks, finance groups, places where sums of money that would make you reel cross over the transom every day, as the global laundry machine pumps away digital blood and bankrupts nations.

Paying off a general and a CIA director (if you can) to extract very, very valuable intell and information is a natural.  Having an affair to hang over his head, an affair to which he has not confessed, is a jackpot.

But no one is particularly worried that Petraeus may have passed information on to blackmailers.

Then we have this.  The general had an enormous amount of information about the US Armed Forces’ strengths and weaknesses, about classified military bases, about deployment numbers, special ops missions, weapons capabilities and limitations in the field, under actual battle conditions.  He knew other generals and officers, and could speak, authoritatively, to their methods, abilities, and deficiencies.  If they had personal secrets, he would have known some of them.

But no one is particularly worried that Petraeus may have passed information on to blackmailers.  It’s only important that he and his family can move on.

During his tenure in the Army and the CIA, Petraeus spoke with Obama many times.  He could offer up, from personal experience, assessments of the president’s character, methods, operational strengths and weaknesses.

But no one is particularly worried that Petraeus could have passed information on to blackmailers.

There is Benghazi.  Petraeus has crucial information about what actually happened there.  There is a good chance he could sink the president’s second term before it even begins.

But no one seems worried Petraeus could have already passed on that information to blackmailers.

No one seems worried because they’re quaking in their boots and covering up their fear.  They’re hoping against hope that the artificial portrait they had painted of Petraeus, as a mythical national hero, holds together long enough to let the ongoing uproar fade down the memory hole.

There are other matters as well.  Petraeus could offer blackmailers an inside view of West Point, the Joint Chiefs, the Pentagon, the Secretary of Defense.

He could discuss, in intimate detail, perception vs. reality vis-a-vis the inner workings of the CIA, conflicts within the White House.  He could disclose secrets about defense contractors, future US weaponry, the revamping of the Armed Forces, classified experiments at DARPA, research on creating the “superior soldier,” dissident military officers who are against the president and his policies and might be trying to drum up various rebellions in the ranks.

And much, much more.

But no one is worried.

Petraeus slipped and had an affair.  That’s the beginning and end of it.

The US military-industrial complex needed a man like Petraeus, at a time when a two-front war was stretching personnel thin.  Soldiers,  ordered to do multiple tours, loaded up with psychoactive drugs,  were starting to push back.

Petraeus came in and provided a sense of order and renewed purpose.  Of course, it was all fake.  It was a “new theory” on how to fight enemies while pacifying civilian populations in Iraq and Afghanistan, as if the wars were, in reality, a humane enterprise.

Obama was Bush with a kinder face.

Petraeus was hailed as a brilliant innovator, a leadership guru. Broadwell celebrated and extolled the leadership angle in her book.

But really, Petraeus was just providing the US war machine with longer shelf life.

He gave that machine cover, and now they’re giving him cover.

And everybody will keep tap-dancing and lying.