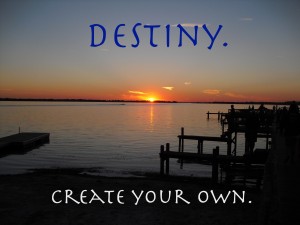 How you look at your life, what you do in life, where you go in life, and with whom…all these decisions are wrapped up in what you think about your destiny.

Granted, this isn’t a subject that pops up on the radar of most people.  But you aren’t most people.

The subject of destiny has been defined by various cultures and religions since the dawn of time on this planet.  Answers have been supplied.  These answers are accepted for a period, and then new cultures and new answers appear.

But such collective solutions aren’t necessarily yours.  You have to make your own inquiry.  And in the end, you decide.

So here are five crucial questions to ask yourself.

One: Is my destiny determined by forces outside myself?

Two: Do I choose my own destiny?

Three: Is my destiny the result of some combination of my own choices and outside forces?  If so, how does this “collaboration” work?

Four:  Is my destiny inevitably wrapped up in the future of others?

Five:  Is my destiny unique to me, apart from the future of others?

In the West, this spirit of inquiry emerged in the Dialogues of Plato, who presented conversations between his former teacher, Socrates, and citizens of Athens.

For the most part, Socrates chose abstract qualities like Justice and Piety to open his conversations; as in, what is Piety?  What is Justice?  What is the Good?

Now, in the second decade of the 21st century, we are faced with a crisis which threatens to obliterate our civilization.  Although I could choose many issues as examples of this threat, I select education itself.

For example, by designed omission, the whole question of The Group versus The Individual has been placed on a shelf where it receives scant attention.

Likewise, free will versus determinism has been excised from serious philosophical discussion.

People say, “Well, we don’t have time for all that ‘thinking’.  It’s a luxury we can’t afford.  We’re just trying to survive.”

But history proves that when the people leave these matters to a few elite thinkers, by default momentous currents are launched.  And then the people are pulled along, whether they like it or not.

Of course, if education in all its forms doesn’t prepare people to be able to think beyond the ends of their noses, then the prospect of answering the big questions is rendered moot, because people aren’t equipped for the job.

The word “destiny” itself has mixed messages.  It appears to be associated with a pre-fixed outcome.  On the other hand, it can be shaped.

The kind of New Age material that was distorted and imported from the East during the 1960s has left a legacy of “surrender.”  If you “let go” of enough preconceived perception, you’ll drift upward and connect with a greater universal consciousness.  Is this so?

Does destiny involve merging into a larger whole?  Does it rather involve extricating yourself from that whole?

These aren’t questions designed merely for the young.  Answering them impacts your future and the future of your children in numerous ways.  Neglecting to answer them is refusing to have navigational skills on the open sea.

Americans pride themselves on being practical and pragmatic.  They opt for “what works” and discard everything else.  But that approach has pitfalls.  It excludes, for example, pursuing deep desires in the face of long odds.  It ends up in shallow materialism, as if that were the totality of life.

John Dewey, the arch-pragmatist philosopher, defined American education for millions of people.  He set its course along a stripped-down path that helped produce generations of dumbed-down worker bees.

Dewey accomplished this by default.  His challengers were few, and they were weak.  Their supply of counter-proposals was garbled and impotent.  Dewey didn’t just win the day through top-down manipulation of the American educational system.  He triumphed because his opponents were unprepared to argue that human destiny was far wider and deeper than the next practical decision of the moment.

So consider these five questions and understand that your future is, in a real sense, riding on your answers.  It always has.  This is the way progress happens.  People undertake a significant inquiry and come to conclusions.  The inquiry may, depending on how honest you are, take five minutes or it may take a year.  In either case, the future comes into focus based on your answers.

One could simply ask himself, “What do I really want to do in life?”  A very good question.  But, as it turns out, the reply to that question is often obscured by prior unasked and unanswered questions.

In other words, a person’s prior view of his own existence is already limited, because he hasn’t found out what he really thinks about something big.  Something like destiny.

These are the famous words Plato placed into the mouth of Socrates: “The unexamined life is not worth living.”

Americans are suspicious about this statement when they hear it or read it.  They think it implies years of useless and even self-destructive internal wrangling that will come to nothing.

But it doesn’t have to be that way.  There is productive  thought.  It’s motivated to take the ceiling off limited perception of what is possible in this thing called existence.

If you choose to, you have the natural right remove ceilings.  Doing it is part of what and who you are.