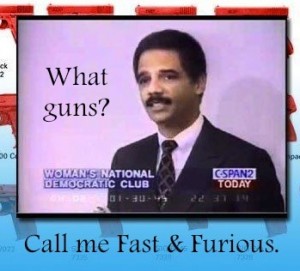 The best way to depict what’s going on in America is through a letter from the head of the Sinaloa Drug Cartel, to President Obama.

In case people are ready to assume this letter is real, it isn’t, but the spirit of it is very true and very real:

Let me begin by saying that you can count on us to support your efforts in disarming American citizens in any way we can.

The Fast and Furious operation backfired a bit in this regard, but I’m glad to see it hasn’t stopped you.

As you know, we are making inroads on US soil.  We’ve set up significant operations in the Southwest, one area where armed citizens can be a bit of trouble to us, especially if they own land we cross or are adjacent to.

We view their disarming with a positive attitude.  I would say your basic gun-grabbing strategy is primarily aimed at the American West.  The border states need to be cleaned out.  The fewer people there who have guns (particularly those with high-capacity clips), the easier it is for us.

But since our drug trafficking lines take in most of America, wherever citizens aren’t armed we’re generally in better shape.

I’m pleasantly surprised that media in your country haven’t pressed you to name the areas where most gun violence is taking place.  After all, if your objective is to reduce that violence, you would think a campaign directed at gangs in inner cities would rank number one on your to-do list.

Those areas and those gangs do subcontracting work for us (and other Mexican cartels).  Leaving them in place is a priority for us.  So congratulations on being able to skirt this tricky issue.  Your cojones are, indeed, huge.

Please pass along my thanks to Brian Williams, Scott Pelley, and Diane Sawyer.  I assume they are in your pocket and carrying your message.  Undoubtedly, they are also refraining from bringing up the gang issue.  Whenever I speak with the president of Mexico, I point out your masterly and deft control of media as a model we should emulate.

Now to the real reason I’m writing.  In Chicago, your crime stronghold, one of our people is on trial.  This is a sensitive matter, as you know.

The defendant, Jesus Vicente Zambada-Niebla, wants to expose our arrangement.  This must not happen.  So far, your DEA and CIA have managed to gain trial delays.

Niebla and his lawyers are ready to offer documents that show the Sinaloa has US federal permission to ship tons of drugs into Chicago, and from there to other distribution points in the US.

Niebla will reveal this deal was made so that Sinaloa would provide valuable information on our rival cartels to the DEA and the FBI.

Therefore, Niebla will point out that he has special immunity from prosecution.  That was part of the deal for high-ranking Sinaloa members.

Fortunately, his trial hasn’t been played up in the American press.  Again, well done.  Coverage has been stifled.  It’s stayed on the back burner, and the CIA and DEA are claiming no such immunity deal exists for Niebla.

But at the same time, the CIA has been making motions in court to have documents excluded from the trial on the basis of National Security.

This is a gross tip-off to our deal, and it doesn’t sit well with me.  It’s awkward.  I’m sure you agree, Mr. President.

The last thing we need here is exposure, especially while you’re pushing forward your gun-grabbing program.

Sinaloa has members and agents and sub-contractors operating all over the US, and naturally these people are armed.  They not only sell drugs, they shoot people.  We can’t control everything they do.

They get into intramural squabbles and use their weapons to settle disagreements.  Bodies pile up.  Sometimes, innocent people are killed.

Our subcontractors commit unrelated crimes that have nothing to do with drugs.  They rob, they steal, they shoot, they kill.

If it comes out that Sinaloa and all its component parts, operating within US borders, are contributing mightily to high gun-violence statistics—

Your gun-grabbing program and our operations will both be in dire jeopardy.

And the blow-up in the press will be catastrophic for both of us.

You and I understand this is just business, but other people don’t see it that way.

Therefore, Mr. President, I’m stating, in the strongest terms possible, that the Niebla trial in Chicago has to be shut down, one way or another.

Either a quiet plea deal has to be struck, or we will be forced to do something drastic.  Soon.

If I’m reading you right, and I believe I am, your gun-grabbing program is just one step in an Operation Chaos aimed at destabilizing your country.

In the past, we have contributed to that agenda, and we continue to do so.  We don’t pretend to understand this whole game at its higher levels, but to us that doesn’t matter.  We’re in business to make money and sell product.

And we expect you to support us.

Congratulations on achieving a second term in office.  Please pass along my regards to President Bush, his father, and President  Clinton.

By the way, in case you weren’t briefed on the specifics of the Aurora and Sandy Hook shootings, I want to state, unequivocally, that no Sinaloa member provided professional services in those operations, which were obviously aimed at provoking a successful follow-up gun-control program.