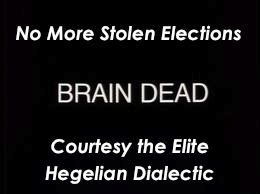 These two luminaries have formed a group called No More Stolen Elections.  If Romney wins, they’ll challenge any instances of Republican election fraud they can find.

They still think there are two political parties in this country.

How quaint.  And soda fountains still dispense cherry Cokes and milk shakes in metal cans.  A twist of licorice is two cents.

There was a time, 40 years ago, when the political left in this country stood for No More War and an end to illegal surveillance of private citizens.

Millions of people took to the streets to protest the Vietnam war, and thousands exposed the FBI’s COINTELPRO program, whereby the DOJ was planting spies and agents in protest groups to push them over the edge into mayhem and violence, so they could be prosecuted.

Those objectives are still relevant.  The US, under a Democratic president, is engaging in covert and overt military adventures all over the planet.  The Obama Adminstration is arming terrorists to pose as armies of liberation in the Middle East and Africa.  We are still in Afghanistan.

The Surveillance State today makes the old COINTELPRO program look like a rag-tag picnic in the park.

But the left, including Chomsky and Hayden, is focused on other things.  Re-electing Obama at any cost.  Giving away more welfare freebies than the current trillion-dollar-a-year programs deliver, while inner cities rot into tombs.  Forcibly enrolling all Americans in a national health insurance plan that will bankrupt the already bankrupted government, that will expose millions more people to medical drugs that are already killing at least 100,000 people a year and maiming 30 million.

In 1966, a march and rally held in West Los Angeles surrounded the Century Plaza Hotel, where President Lyndon Johnson was staying, and forced LBJ into a box he couldn’t escape from.  He abandoned his run for reelection in 1968.

The left has become a know-nothing force that rivals the right.

In California, the referendum on GMO labeling of foods has seen a fading of active support from the left.  Their stance against murderous big corporations (in this case, Monsanto) has withered.  Perhaps this is because their hero, Obama, has become Monsanto’s chief lobbyist in Washington.  The left rarely mentions this.

The left’s aborted Occupy protests failed to see through to the implications of what they themselves were pointing at.  It was too much for their tired brains.  They couldn’t and wouldn’t equally accuse Clinton, Bush, and Obama for their roles in Grand Theft America.

The political left in this country is now all about more freebies, and sometimes they’re not even able to articulate that.

They fail to recognize or admit that Obama is the equal of Bush when it comes to war-mongering.

If Romney wins, he’ll bring back the old neocon crowd to replace Obama’s new neocon crowd.  The federal government will not shrink.  Imperial empire will still be on the table.  24/7 surveillance of private citizens will still be the rule.  Ditto, if Obama wins.

The left in this country is a barnacle hanging on to a bubble of delusion.

The left is now a quasi-religion based on empty slogans.  Even the labor unions in America, once a force for better working conditions, have devolved into a ground-game army to get voters to the polls.  Long ago, the private-sector unions sold away their strength to NAFTA, CAFTA, GATT, the WTO, and other death-dealing “free trade” regulations, with barely a whisper.  They sold out their memberships to mega-corporations, and they’ve been paying the price.

The left is now a charade, a shadow play of ghosts.

They have no memory of the days when at least a few of their own wanted to crack the egg of centralized political and economic power in America. They don’t have the brains or balls for that now.

Tom Hayden?  Noam Chomsky?  You can put them on a level with George Clooney, Sam Jackson, Madonna, and Alec Baldwin.  At best, at the very best, they’re all brain-dead amnesia victims.

There is one political party in America, and no matter who wins the election today or how much fraud occurs on either side, the mission to forge a better nation will fall, by default, into the hands of people who reject both branches of that one party.