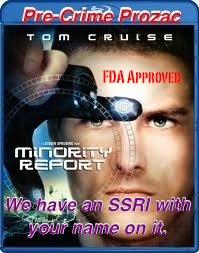 Personal responsibility is the beginning and end of reasonable and lawful behavior in a society.  But I could write a thousand pages on all the factors induced to create violence in this country.

The chemical (drug) factors and heavy metals alone would fill a book.  The covert political, psychological, and economic ops would fill another book.

Those who design the problem, from behind the scenes, those who help create widespread violent crime, intend to provoke a specific demand from the populace: stop the violence!

Then, a solution is promoted: “science” enabling the authorities to predict who will commit violent crime.  This leads to “treatment” that will keep violence from happening.

In other words, if you watch movies, The Minority Report and Clockwork Orange.

The LA Times is reporting the results of a new study.  “Brain scans of inmates turn up possible link to risks of reoffending.”  Prisoners with low activity in the ACC region of the brain (anterior cingulate cortex) are said to be more likely to commit new crimes.

In the research community, this study is hailed as a potential step forward in the march to reduce violence.

People in the general population, hearing about the study, while watching violence on the streets of America, in the wake of the Zimmerman verdict, breathe a small sigh of relief.

“Maybe this will bring peace.  Maybe they’ll find a way to change the brains of criminals so they don’t go off again.  Maybe they can find people before they commit their first crime and treat them…”

As of 20 years ago, Breggin established there were already several hundred thousand cases of psychiatric-induced brain damage in America.

The drugs powerfully sedate.  They attack multiple neurotransmitters in an unpredictable fashion.  They “normalize” patients by putting them in a trance or manic state.  They toxify the liver.  They injure the brain.

Under the cover of “repairing specific brain dysfunction,” doctors can easily prescribe drugs that simply render patients into a state of poisoned docility.

There are all sorts of tricks that can be staged.  For example, the early research on Prozac found the drug changed serotonin levels in the brain.  Then, the announcement went out: altering serotonin was the key to reversing depression.  It was science by circular reasoning.

But when violence, regardless of causes, escalates in society, people are ready, willing, and eager, to grasp at straws.  Stop the crime!  Do whatever you have to do!

It’s no accident that, in the wake of the Aurora and Newtown murders, the watchword is “mental health.”  With new clinics springing up across the country, people vaguely suspected of having a propensity toward violence (lawful gun owners, for instance) will be ushered into the psychiatric arena.

Doctors will diagnose and drug these patients.  The results will be devastating.

In a related development, AFP is reporting that the FDA has just approved the first brain-wave test for ADHD.  The test is not certified as a stand-alone diagnostic tool.  But, we are told, with other standard measures, doctors will now have a better method for accurately assessing children who are hyperactive.

A better method?  Compared to what?  There is no gold standard for ADHD.  It’s a fictional catch-all category, and it always was.

On one end, you have kids who are bored, restless, poorly educated, smarter than their fellow students and teachers, living in homes where conflict between their parents is a daily event, frightened of other students who are bullying and coercing them.  Pick one.  Pick several.

On the other hand, these children are feeling the effects of sub-standard nutrition, toxic ingredients in their food, fluorides, heavy metals, drugs, vaccines, pollution, allergies.  Pick one.  Pick several.

Now reduce all this to a menu of behaviors, apply the ADHD label, and prescribe drugs that, in the long run, exacerbate out-of-control behavior, bring on depression, and in some cases elevate aggression.

The entire covert op to stimulate violence in America, following up with interventions, and finally “prediction of future violence,” is underpinned with, yes, a philosophic position: the mind is nothing more than the brain.

Therefore, an all-out assault on brain function is the answer.  If you want a supposition guaranteed to sink a civilization, this is it.

It’s called Materialism, and it relegates humans to the status of biological machines.  Huxley’s Brave New World is an apt portrait of where this philosophy leads us: the garbage bin.

But a pleasant garbage bin.  Because all citizens are birthed in genetic labs and endowed with pharmaceutical low-level happiness.  It’s “good science.”

Crime is a thing of the past.  The cure solves the problem and invents a society in which problems are outlawed.

That was one of the messages of Clockwork Orange.  Do whatever is necessary to end violent impulses; the world will change; it will get worse.

Here are three different ideas: the individual is essentially non-material; he is free; he has tremendous latent creative power.

Were these ideas to form the basis of a society, and were its people to explore the implications, a vastly different status quo would emerge.

It would be no status quo at all.  Instead, an open dynamism would serve as the prow of the ship.  Hidebound fanatics and devious psychopaths would fail to affect our journey.

Violence, both as a problem and a solution, would disintegrate in our wake.

Since our present leadership has no authentic interest in these matters, the future falls to individuals.  Where it has always been.