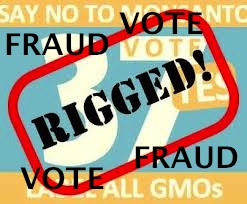 When the networks and other media outlets made the early call on election night, claiming Prop 37 had gone down to defeat, there were millions of votes still uncounted.

I just checked the California Secretary of State’s website, which is the official center for vote results, and there are 3,334,495 votes that remain unprocessed.

Reading the county-by-county reports, the last date any of them reported in with numbers was November 8, three days ago.

Why is it taking so long for California to count all its votes?  Why do so many remain uncounted at this late date?

Yes, some of them are what’s called provisional votes.  That basically means they were turned in with errors, and those errors need to be tracked down and corrected.  That takes time.

But large numbers of uncounted votes must be electronic.  What’s the hold-up?

Of the 3.3 million votes that remain uncounted, how many people voted on Prop 37, one way or the other?  I don’t know.

We can fiddle with estimates and projections and try to figure out how many people would have to vote YES on 37 for a victory, but—and this is very important—a larger specter looms over all this.

I really hope you get this.

When the absurdly early call against Prop 37 was made on election night, that was a clue.  It was a red flag.  It was a loud siren:

“Something is very wrong here.”  That was the message.

From the moment that clue sprang forth, from the moment that siren went off, we had two choices.  We could say, “Well, the TV networks are insane.  They’re crooked.  So we need to get all the votes counted, to see what the real result is.”

Or we could say: “This early call against 37 suggests more criminality.  Other crimes.  How can we rely on the vote count at all?  How can we assume, even when the other votes are counted, we’re going to get a true result?”

The second conclusion is the correct one.  This is what I’ve been saying for the past several days.

Many people naively believe that the early call against Prop 37 was the only problem.  They assume the entire vote count, when it’s finished, will be true and honest.

Let’s say you’re investigating a jewel theft.  And you see a guy walking down the street and he has part of a big necklace hanging out of his pocket.  Do you assume the necklace is the only stolen item he’s carrying?  Or do you infer the guy is loaded with other items from the theft?

Here are two sources you can consult.  The first is an extensive article by Victoria Collier about general vote-count fraud.  The second is the California Secretary of State’s own 2007 “Top-to-Bottom-Review” of voting machines used in elections.  This report is a mind-blower.  It reveals massive opportunities for vote fraud.  Should we blithely assume California has fixed all those problems?

Here are two sources you can consult.  The first is an extensive article by Victoria Collier about general vote-count fraud.  The second is the California Secretary of State’s own 2007 “Top-to-Bottom-Review” of voting machines used in elections.  This report is a mind-blower.  It reveals massive opportunities for vote fraud.  Should we blithely assume California has fixed all those problems?

Recently, a team at the Argonne National Lab showed how a voting machine could be hacked and controlled, using a small device that costs between $10-$26.

There was the famous 2010 experiment, in which a team from Ann Arbor, Michigan, offered to hack the District of Columbia’s voting system.  They broke in and reversed the count in the mayoral election.  They also fabricated absentee votes from overseas and canceled out the real votes.

In my second article on the Prop 37 scandal, I tracked the early media call against Prop 37, on election night, to its most probable source, the Associated Press (AP).

AP, the giant wire service, is officially a non-profit owned by 1400 member newspapers, who use its services and also contribute articles.  However, as everyone knows, the newspaper business in America is dying.  Its bottom line is sitting in a lake of red ink, and the lake is sitting in an ocean of red ink.

That means these newspapers, and the corporations who own them, have been re-financing their very existence with loans, and loans to pay off earlier loans.  That means banks.

Now you’re getting into the oligarchy that owns this country.

Does this sound too far-fetched?  Too remote?  Can we really say that “the powers-that-be” defeated Prop 37?

Well, remember that YES ON 37 was a wedge against the assault of GMO food.  It was the first of a number of dominoes that could fall against Monsanto and other GMO companies.  Why?  Because once consumers could see, labeled on the food they bought, whether it was GMO, they could make a choice.

And surveys indicate that huge numbers of people don’t want to eat GMO food or are at least suspicious of it.

Imagine what would happen if millions and millions of Americans, starting in California, rejected GMO food at the market.

Is that a threat to the mega-GMO-corporations who want to own the patents on all food crops on the planet?  Is the Pope Catholic?

We also have more down-to-earth fiddling with Prop 37.  An instant classic press conference was held a few days before the election, by the YES ON 37 forces.

I was on that phone call.  One by one, I heard reporters from major media outlets confuse and divert the whole issue of crimes committed by NO ON 37 forces.  These reporters channeled the discussion into an irrelevant nit-picking question: Has the FBI really opened a full-blown investigation into NO ON 37, or is it really just an inquiry or a mild expression of interest?

This theater-of-the-absurd crashed the intent of the press conference, and in the ensuing days, just as election day loomed, sure enough, stories appeared in the press.  The gist of these stories was: “no real FBI investigation”; “YES ON 37 had it wrong”; “who’s really deceiving who.”

What started out as an effort to expose very obvious lies and crimes committed by the NO ON 37 forces boomeranged completely.

So, all in all, there is substantial evidence that, in the run-up to election day, and in the criminally insane early call against Prop 37, on election night, very heavy hitters didn’t want Prop 37 to pass.

Therefore, do we foolishly assume the ongoing vote-count in California is going to be honest?

Do we assume the votes that have already been counted and reported in California are true and honest?

Many people would like to think we can assume honesty in these matters.  It would be nice to believe in the system.  But it would a fatal error.