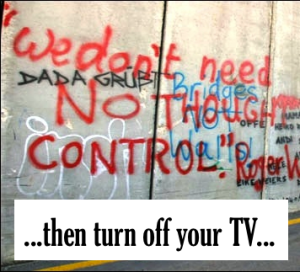 Somebody has to write about these things.  Since I’ve worked as a reporter for 30 years, I know enough about how the game is rigged.

Many of the interviews with survivors are done on the spot, with no prep.  But the biggest interviews are done in a television studio or a home, by a recognized anchor.  The setting is arranged beforehand and lit well.  A mood and a framework are established.

The guests are prepped by one of the producers before they go on-air.  This is where the brainwashing occurs.  A potential conflict needs to be resolved.  The network has its agenda and the guest has his.

The guest is swimming in a welter of emotions, in the wake of the tragedy.  A family member has died.  The environment of the storm or the murders is still chaotic.

The network wants to “edit” these feelings, to convey something specific.”

The producer says to the guest, “What we want to do here is let our audience know how special your daughter was.  How wonderful a person she was.  We realize, of course, that you’re grieving.  We understand and honor that.  We do.  In this interview, we really want to give you a chance, though, to tell the world what a special girl she was.  Talk about her life, her interests, her hobbies, how she was thought of by the family and by friends at school.  Honor her memory…”

Now, this may be the last thing on the guest’s mind.  This grieving mother may be feeling angry, outraged.  She is feeling absolutely desolate.  She is feeling lost.  Given the opportunity, she would express these feelings.

But this is not what the network or the anchor wants.  The “program” at the moment involves “reflection on the happy moments of the child’s life.”  It’s part of the pre-set storyline.

At this moment, for this grieving mother, the happy moments are the  farthest thing from her mind.  But who cares?  She just fodder for the network’s agenda.

And if the producer is skillful enough, he can gently convince the mother that she should devote four minutes of commercially sponsored national television to “a celebration” of her dead child’s life.

Suddenly, it makes sense to the profoundly confused, profoundly searching mother.  Yes.  Why not?  Why not go along with the program?  She’ll have a video clip about her wonderful daughter forever.  A scrapbook memory.

Under no circumstances, of course, will the producer or the anchor permit the mother to go on camera and show outrage and anger.  That’s verboten.  That cuts too close to the bone.  That doesn’t fit the mandatory sequence of horror, shock, loss, grief, healing, resolution, celebration of a life lost.

The whole sequence is artificial.  It’s imposed.  It’s orchestrated.  It’s a stage play, produced in great part through interviews with guests who have suffered loss and who are “real.”

Except they’re not.  They’re programmed to deliver what the networks want.

And behind all this?  Behind the mandatory spooled-out story line, which takes days to reveal in full, on television?  The concealed anomalies and lies and contradictions in the commission of the crime and the ensuing cover-up.

The network story line hides as much of that as possible.

This is why the interview-prep is so important.  Here is where the guests, before they go on camera, are nudged into the right slot, are shown what to focus on, are brainwashed into doing something they would never do.

Programming guests is a skill.  Networks need people who can do that well.  They have them.  They pay them.

Anchor: I understand your daughter liked to make airplane models.    Did you think that was unusual?

Mother: Well, at first we did.  But she was good at it, and she enjoyed it so much, we became very enthusiastic about it.  My husband introduced her to a buddy of his from the Air Force, and Cindy went up in a jet.

Mother:  When she came home, she was overjoyed.

Anchor:  Did she want to become a pilot?

Mother (laughing): For a few days.  But her love of making models led her to want to be an artist.  Our son is a graphics person.  He taught Cindy to make computer pictures of our whole extended family.  (laughing)  We have lots of cousins and aunts and uncles.  Cindy put their pictures all over the house.  She knew everybody’s names when she was four…

Completely wacko.  But that’s what the television audience sees and digests and accepts.  And the anchor moves it right along.  A fabricated story. Intercut, of course, with Cindy’s pictures and Cindy smiling and playing and drawing and sitting at the computer.

And when the dust settles and the mother is being chauffeured home from the interview, her mind wanders and she begins to think about the revenge she wants to visit on the killer of her daughter.  As many good mothers would.  But it’s too late.  She’s already had her four minutes on television.  She feels like a fool, but it’s too late.

She’ll never get to say to Diane Sawyer, “You know, Diane, I wish somehow I was there at the school, and I had a gun, and I shot that killer dead.”

No, that will never happen.

And mothers across America, who are feeling that they, too, would have wanted to be there, in the school, if their child was in mortal danger, and would have wanted to have a gun and shoot the killer dead to protect their child at all costs…those mothers will be, to a significant degree, reprogrammed by the Diane Sawyer interview, and they too will begin thinking of the happier times and the old days and the smiles and the laughter.

This is how a handful of television interviews with skillfully prepped guests can make all the difference in the world.  Especially, in the case of Sandy Hook, when gun ownership is now at stake.  Do I have to draw a picture for you?

Because, admit it, if you were the father or mother of a child who was murdered, wouldn’t you have at least a few serious thoughts about revenge?  Wouldn’t you?  Wouldn’t you think about the .45 you have in the closet upstairs?

Television, though, teaches you what to feel.

If after watching a number of these tragedies play out on television, you are completely reprogrammed into some grotesque version of “love everybody all the time and forgive everything,” and you need an outlet, a way to vicariously and subconsciously experience what you REALLY feel, you can always:

Go to the movies.  The movies give you a different slant.  You can be Mel Gibson killing people to get his kidnapped daughter back. You can be Charles Bronson wiping out street scum to avenge the loss of his wife.  You can be Stallone or Arnie.  You can roam the countryside spilling blood at every street corner.

The movies give you vicarious license to destroy evil.  Television news takes it away.

It’s called the whipsaw effect, and it’s modern mind control, and it puts you in the “excluded middle,” where nothing happens and you remain locked up and passive.

Where the powers-that-be want you to remain.

Have a nice, nice day.