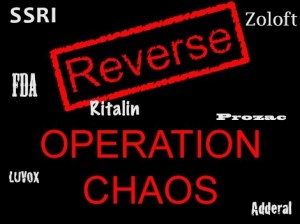 Jacob Roberts, the Oregon mall shooter, and the shooter(s) at the Connecticut elementary school, share a common trait: they committed irrational and inexplicable murders.

This may seem like an obvious fact, but it holds the key to understanding what is going on.  You don’t look for an ordinary motive.  Therefore, what are we dealing with?

It’s easy to say, “They were crazy,” or “Who cares why they did it,” but that gets you nowhere.

First and foremost, we have to consider the possibility that SSRI antidepressants like Prozac, Paxil, and Zoloft were in play.  The drugs have been well studied.  They do, in fact, push people far over the edge, scramble neurotransmitter systems, and result in patients committing suicides and murders.

My extensive school-shooting report, written a decade ago, lays out the facts about these drugs, and also about the amphetamine-type drugs prescribed for ADHD, like Ritalin:

The meds cause inexplicable violent behavior: suicide, homicide.  The drugs were, in fact, linked with the 1999 Columbine school shooting.  Eric Harris, one of the killers, was on Luvox, an SSRI antidepressant, which was taken off the market by its manufacturer several years later.

It’s long past the time when police should continue to fear defensive psychiatrists.  In these latest tragedies, an investigation must be launched immediately to see whether the shooters were on these drugs, or whether they had just come off them.  The withdrawal effects alone can be horrific.

You can be sure drug companies have people striving to find out, in Oregon and Connecticut, before anyone else does, whether the shooters were on the devastating drugs.  It’s called damage control, which means, if necessary, covering up or downplaying the facts.

The same kind of damage control is no doubt being tried in the Aurora theater shootings, where it finally leaked out that James Holmes was under the care of a psychiatrist and was, most likely, on one or more of the drugs that induce out-of-control violence—inexplicable baffling violence.

Jacob Roberts, the Oregon mall shooter, was said to be happy-go-lucky, and then shortly before the killings, “went numb.”  Investigate whether he was under the care of a doctor, and whether he was given psychiatric drugs.

Whether either or both of the shooters in Oregon and Connecticut were operating out of an even darker mind-controlled program, as was apparently the case, for example, with the dupe in the RFK assassination, Sirhan Sirhan, we are still looking at Operation Chaos:

Generations of children and adults have now fallen under the influence of psychiatrists, who have given them these brain-scrambling chemicals, and the overall outcome is certain.  People will continue to launch inexplicable motiveless murders, on a random basis.

The destabilizing effects on the society, the debilitating effects on the population are enormous.  People are confused, they become more passive, they move a little further each time into dependence on the authorities.

The government screws in tighter controls on freedom.  New programs are mounted to take away guns from citizens.

All this is the aim of the massive covert operation that is behind the “mental-health establishment.”  Distort the brains and neurological systems of millions of people, and let the chips fall where they may.

Mass murders are the consequences.

Whether or not Jacob Roberts and the Connecticut school shooter(s) were on these psychiatric drugs, Operation Chaos will proceed.  The very fact that we may never find out whether the latest mass murderers were drugged in this way speaks volumes: powerful people don’t want the truth to be known.

This is a common feature of all mass murders: the police and the prosecutors refuse to investigate the psychiatric medicines, unless they are absolutely forced to.  They are under tacit orders to ignore that obvious and glaring route of inquiry.

The most important reason why?  The hugely powerful drug companies, who are only a step away from incrimination, when a shooter is driven to kill by the storm created in his brain by the drugs.

Billions of dollars are at stake.

The pharmaceutical companies have it all figured out.  No matter how much is written and discovered about the violence-inducing effects of psychiatric chemicals, they can ride things out and keep selling those poisons.  The FDA will maintain a hands-off attitude.  The money will keep rolling in unless:

One of these killers is shown to have killed because he was on Prozac, Zoloft, Paxil, Ritalin, or Adderall.

Terrible things happened in Oregon and Connecticut.  Terrible things will keep happening unless a relentless pursuit of the truth is undertaken.  Anything less is obscene dereliction of duty.

To law-enforcement officials: blood is already on your hands.  Find the truth and tell it.