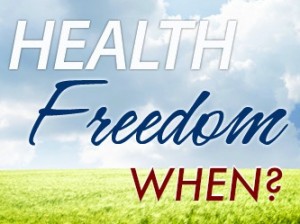 When I ran for a Congressional seat in 1994, I tapped into a small vein of the sleeping giant.

It takes a a great deal of effort to wake it up, but it can be done.

The Democrats don’t want to do it.  Neither do the Republicans.  They sense the danger.

The sleeping giant is a rough and rebellious crowd.  They can make all sorts of trouble for mainstream politicians.

They don’t particularly like the stink of government.  They don’t react to typical political slogans or cons.

Some of them have been dragged into the mainstream, but most of them stand far outside and prefer not to vote.

I’m talking about the health-freedom people.  There are millions of them in America.  In 1993-4, they sent letters to the federal government, more letters than had ever arrived in Congressional offices and the White House on any issue.

No Democratic or Republican presidential nominee has ever directly addressed these health-freedom people.

They’re scared to.  They want to pretend this potential voting bloc doesn’t exist.  It’s too much like real freedom.  It’s too Constitutional.  It cuts too close to the bone of what this country, under the fat and the blubber, is supposed to be all about.

But if effectively wakened, it could swing a presidential election.

Any serious candidate who pursued the health-freedom vote would face nasty opposition from the medical powers-that-be.  So there is a trade-off.

But consider this.  By the most conservative estimates, 225,000 people in the US are killed by medical drugs every year.  2.1 million are hospitalized for the same reason.  And there are 36 million severe adverse reactions to pharmaceuticals, annually.

For each one of those deaths or maimings, there would be at least four people in the immediate circle who suffer emotional turmoil and stress because of what’s happened to their friend or family member.

Add up all those numbers, keeping in mind that the stats quoted above are exploding newly, every year, and you see the number of health-freedom people is potentially enormous.

How many Americans are opposed to what is happening to our food supply?  I’m talking about genetic modification and the drenching deployment of pesticides and herbicides.  These people are in the same basic boat.  They want health, too.  They want to be free from the government-Monsanto-Dow-DuPont nexus.

What about chemtrails?  What about the toxic elements that have been found in this massive program of aerial spraying?  How many Americans have already awakened to this source of illness?

What about enforced vaccine schedules, and the government-led program to close down exemptions?  What about all the parents who are fully aware that their autistic children were devastated by vaccines—no matter what the government claims?

Do the math.  Now we are talking about a political sleeping giant that certainly could elect a president of the United States.  There is no doubt about it.

But here is where we come to a crossroads.  Is a new national political party the best option?  The Health Freedom Party?

Or is the better choice to move in the direction of nullification of federal laws that violate the powers assigned to the central government by the Constitution?

Perhaps doing both is the right path.

This needs some thought, appropriate for the day on which the nation will election one of two puppets for its next criminal-in-charge.