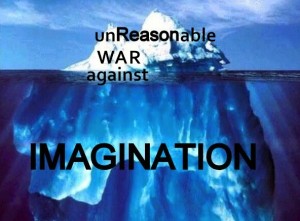 I could begin by saying that the compulsion to vote for one of the two major presidential candidates is a failure of imagination, a failure to see clearly other long-range possibilities for the transformation of American politics…and that would be true.

But it’s only a tiny corner of the overall war against imagination.

Why?  Because the repression of imagination downgrades the essence of what the individual human being is.

That repression brings us ever closer to the day when orders from our leaders will be obeyed without hesitation, because we can only envision the choices they construct for us.

Take A or B.  Of course, it turns out that our freedom and power are mortgaged by either choice.  And since the prospect of imagining C through Z and beyond is dimly perceived, we acquiesce.  We say A or we say B.

And we pay the price.

Imagination is the capacity to invent realities that don’t currently exist, that have never existed.

Along with imagination comes the courage to implement those invented realities, to make them FACT in the world.

We can blame all sorts of people and institutions for our failure of imagination, but that doesn’t change our situation one iota.  It only postpones the day when we take the reins of our own destiny.

I’m now talking about the individual.  I’m referring to what has been called talent, high IQ, paranormal ability, magic.  These and other terms have been used to describe the effect of living through imagination.

It may be hard to see this, because we have been looking at life through the wrong end of the telescope.  We see ourselves struggling to reach up to a level we seem to know very little about.  But this is backwards.

The truth is, there was a time when each of us knew what it meant to live through and by imagination.  We were there.  And when we were there, we understood perfectly.  We understood because living through imagination was the most natural thing in the world.  It was like breathing.

It still is, but we have managed to cut ourselves off from that knowledge, from that intimate knowing.  And so we profess ignorance.  Which is like a bird walking across a beach and wondering whether he’ll ever be able to fulfill his dream of flying.

Along with my work as an investigative reporter, imagination has been my main area of focus over the past 25 years.

To use the metaphor of alchemy, in which terms like Quintessence and Philosopher’s Stone and the Fifth Element were discussed, imagination is Quintessence.  Imagination is ultimately the thing that surmounts a state of endless internal conflict in which nothing is ever finally decided.

Imagination can and does employ all the energies that are normally devoted to competing sides in a state of conflict.  Imagination takes those energies as raw fuel for its fire and transforms them into the substance of vision and the creation of new realities in the world.

Although people tend to think of imagination as a toy for children, it is actually, when used and experienced intensely, a means for vaulting up to a whole new level of living…at which point a person gains access (magically, it seems) to information and capability that was never present before.

But in fact, this new level of living is entirely natural.  It was always there.  It was simply hidden and and buried and isolated under a welter of cover stories generated by the person himself.

Trying to unravel and expose and catalog each personal cover story, and “get to the bottom of the whole thing,” is a fruitless task.  It only digs one in deeper.  This was the mission of psychology, and it has failed in the most profound ways.

The starting point is imagination itself.  It raises all boats.  It relieves us of the need to do exploratory surgery on all the roadblocks that might be holding us back.

As I’ve written before, the centuries-long struggle to liberate humanity from central authority, and establish individual freedom as the overriding principle of existence, was step one.  Step two was deciding what freedom was for.

The answers we provided, while useful, were incomplete.

Most of all, imagination is the road along which the individual regains his natural power and joy, and attains what was always his.