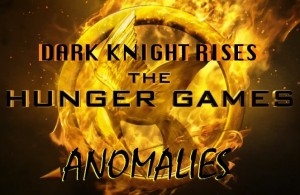 The Dark Knight Rises and The Hunger Games.

We’ll get to them in a minute.

This article is in the interest of full disclosure.  The easy way out is to accept the basic facts given to us by the police and media.  So let’s take a breath, back up, and take a wider view.

Multiple media sources state Adam Lanza, the accused Newtown mass murderer, wore a mask while he killed 26 people in the Sandy Hook Elementary School.  So who IDed him as the killer?

Obviously, the police, after the fact, when Lanza was dead.

In any crime with such torrid political implications (“take away the guns”), we have to question all the facts.

Presumably, the police found Lanza dead with a bullet wound from a gun lying next to him.  They saw he was wearing a mask and body armor.  They assumed he was the killer.

Later, the gun was traced back to its owner, Lanza’s mother.  Bullet analysis of the victims revealed this was the murder weapon.

So it was a murder-suicide.

Unless there was a different person who did the shooting (cops found and arrested a man wearing camo in the woods near the school…what happened to him?).  And who was the man police had “proned out” near the school?

An alternate scenario: Lanza was the patsy.  The actual shooter(s) in the school killed him with the murder weapon.

Because “everybody knows” Lanza did it?

Because the media report what the police tell them?

Because the police drew the “obvious” conclusion when they found a masked and body-armored Lanza dead with the murder weapon next to him?

It all comes down to this.  Conventional reality vs. extraordinary reality.  The overwhelming majority opt for the former every time.

Lee Oswald was the lone shooter (the majority don’t even believe this now).  Sirhan Sirhan killed RFK (the evidence says he couldn’t, because he was standing on the wrong side of RFK)

Lanza would be the perfect patsy.  Loner, shy, vulnerable, behaved strangely, Asperger’s Syndrome; MOTHER WAS AN AVID GUN COLLECTOR, had taught her son to shoot; relative of the family tells CBS News the mother was worried about collapse of the economy, wanted weapons in case she had to defend her home and family (DOOMSDAY PREPPER)…and there you have just the right scenario for the gun grabbers, who have been going at it full-bore in the last two days.

“These kids would be still be alive if the mother wasn’t a doomsday prepper.”

On top of that, as I wrote in my previous article, we now have the boggling connection to The Hunger Games.  In that sci-fi novel and film, 24 children are picked to take part in a competitive, national, blood-sacrifice, killing ritual…one child survives at the end and 23 die.

And the author of The Hunger Games, Suzanne Collins, lives in Sandy Hook, next to Newtown.

And this means?  This is just the kind of bizarre and insane op secret societies are reputed to enjoy.  Ordinarily, I would ignore this sort of thing and just call it a coincidence, but it’s too improbable.  I can’t prove the killings in Newtown were part of that kind of op. But I can’t disregard it, either.  The “coincidence” is just too stunning.

And if The Hunger Game connection is real here, then all bets are off.

If you recall, there was another recent mass murder in which a film played a part.  Batman.  The Dark Knight Rises.  The Aurora theater.  The Joker.  James Holmes, also masked.

There are serious questions about exactly where he was arrested.  At the theater exit, as the media reported?  Or as other witnesses say, in his car.  Was Holmes a patsy, set up to take the fall for murders committed by pros?

Corbin Dates, a purported eyewitness in the theater, and at least one other unnamed witness, spoke on camera to the media about a second shooter in the theater.

Yes, we want answers.  We want them quickly.  We always do.  But it’s better to open up all lines of questioning, rather than chase a cooked-up scenario down the rabbit hole and end nowhere.

Of course, in the Newtown murders, we have all sorts of contradictory reports that surfaced early on.  These “errors” have been attributed to “typical confusion that always accompanies” the first stories from a scene of chaos.  We always write off these mistakes.  But why should we?

There was the confusion about weapons.  The killer used a hand gun.  No he didn’t.  It was a rifle.  There was a rifle found in the trunk of a car.  No, three weapons were found.  The killing weapon was Sig Sauer pistol.  No, a rifle,  It was a Bushmaster rifle.  No, it was a Sig Sauer rifle.

Were all these early errors made in the heat of a chaotic scene, or were some “errors” put out there to confuse a true investigation and possibly delay media and police, while the real killers escaped?

Inferring from the medical examiner’s statements, Lanza, if he was the killer and if he was using a Sig Sauer rifle, would have employed at least three clips in the killing spree.  He would have had the persistence to reload that many times and continue the shooting?

A violent outburst, to which Lanza might have been prone, if he indeed had a developmental disorder called “Asperger’s.” is not the same thing as the methodical murder of 27 people, reloading three or more clips in his rifle.

And now let’s back up again, to the scene of the crime, as police were inside the school.  From reports, the police entered the school after the carnage was over.

They found Lanza’s body.  They saw the mask and body armor.  They inferred he was the shooter.  But what would have prevented the real pros, the killers, from killing Lanza and dressing him in a mask and body armor and leaving him there?

Oh, that couldn’t happened.  People wouldn’t do that.

The two movies, The Hunger Games and The Dark Knight Rises, provided a backdrop of dystopian chaos and violence, and a society in which coherence has broken down.  Criminal forces, winning.  The vision of a peaceful and prosperous nation in which institutional justice stands a chance, shattered.

Whether you call “them” the Globalists, the secret societies, the Illuminati, the elites, the Bilderbergs, the CFR, the Trilateralists, you come up with the same game plan:

Destroy America, destroy the idea of individual freedom, destabilize the webs of community, engender fear, make it seem necessary for top-down control to be exerted, “to save us all” from rampant chaos.

These two movies, with tremendous advance publicity and anticipation, bolster the premise that American is too far gone to save.

Now, on top of that, we have two horrendous mass murders connected to these films, and the murders seem to prove the point: we are, in fact, too far gone…unless our wiser leaders step in and make great changes in the way we live.

What changes?  Take all the guns.  Restrict freedom.  Spy on all of us 24/7, no matter where we are, no matter what we are doing.

“If you’re not doing anything wrong, you have nothing to fear.”

Yes.  Be good little boys and girls.  Obey all the rules.  Accept new rules, whenever they are dictated.  Keep your eyes straight ahead.  Think good thoughts.  Be positive.

But even then, be warned, as in Newtown, the perfect little American community, we can experience the murder of innocence.  That’s the lesson that is being imparted.

Even then, we learn, there will be a struggle to establish this happy Matrix we all desire.  Therefore, all the more reason to surrender our rights and freedoms, so our leaders can work their overarching solutions without resistance and interruption.