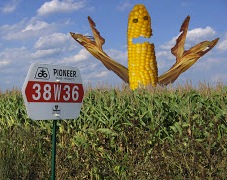 You’re a farmer.  Season after season, you watch your fields being taken over by Monsanto superweeds, which are resistant to the herbicide Roundup.

What are you going to do?  You’re locked in.  You’re buying your GMO seeds from Monsanto, and the food crops that grow from those seeds are supposed to be resistant to Monsanto’s Roundup, so that’s what you spray on your crops.

But the weeds aren’t resistant.  They spread and they grow taller.  They’re taking over.

So you, along with many, many other US farmers, go to a strategy called “burndown,” which is just as bad as it sounds.  You use something a lot stronger than Roundup to kill those weeds: Paraquat, for example, which has been banned in 32 countries.

You drench your fields with it in the fall.  You kill anything growing.  And you drench the fields again in the spring, before you plant.  Then, just as you’re going to plant, you hit the fields a third time with the poison.

This is in addition to all the sprayings with Roundup, which is toxic, too.

Then you harvest the crops and you sell them.  And consumers eat the food along with all the poison.

The total acreage of US farmland with resistant superweeds jumped by 51% in 2012.  In 2011, it was a 25% increase.  That upward- percentage escalation is called a nightmare.

Well, so farmers are poisoning the hell out of their food and their fields.  But with Monsanto’s super-duper GMO technology, the crop yields are still much bigger than they would be without the GMO seeds, right?

The Institute for Responsible Technology cites and quotes three reports on that score.

An International Assessment of Agricultural Knowledge, Science, and Technology for Development study, signed on to by 58 governments and 400 scientists, states that GMO crop production is “highly variable,” and in some cases it has “declined.”

The Union of Concerned Scientists’ 2009 report, “Failure to Yield,” emphatically stated: “Commercial GE [genetically engineered] crops have made no inroads so far into raising the intrinsic or potential yields of any crop.”

A US Dept. of Agriculture report: “GE crops available for commercial use do not increase the yield potential.  In fact, yield may even decrease…”

Let’s summarize.  Using Monsanto GMO technology to grow food crops results in massive poisoning of the farm land and the food.  And increased crops yields are a fiction.

Nothing to see here, move along.  Don’t worry, be happy.  Stand back, technology at work.  Progress is our most important product.  Better living through chemistry.  Ignorance is strength.

What would a president and his administration do to make sure the truth is overrun and squashed?

In addition to silencing the media, they would appoint a host of GMO insiders to key government posts, and they would bring to market as many new GMO crops as possible, to construct a fait accompli.

So let’s go to the scorecard and review the actions of Obama in his first term.

As the new head of the USAID, Rajiv Shah, who had preciously worked in key positions for the Bill and Melinda Gates Foundation, a major funder of GMO agriculture research.

And now let us look at what key Obama appointees have wrought for their true bosses. Let’s detail the extraordinary parade of GMO crops that have skated through the open door of the Obama presidency.

That’s how you control and squash the truth.