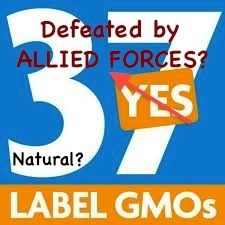 Before you decide I’m just making this stuff up, answer this question: do you really think food sellers like Whole Foods wanted to see hundreds, maybe thousands of their store products suddenly say “GENETICALLY ENGINEERED” on them?

Well, that’s exactly what would have happened if YES ON 37 had won.

With that prologue, let’s begin.

I’m not talking about the workers for the YES ON 37 campaign.  There is no doubt the ground game was fought by honest people.  But at the top level, a few “suits” relied on advice from professionals who told them there was only one way to win the vote:

Focus on the consumers’ right to know what was in their food.

That’s it.  That was the biggest message.

GMOs are horrible.  GMO food is destructive to health, to the soil, to farmers…and, by the way:

The natural foods industry, which is big business in California, sells tons and tons of GMO food.

It’s labeled “natural.”  But in a huge number of cases, “natural” contains GMOs.

Without all that “natural” food ringing cash registers, big health-food sellers would go belly up.

If YES ON 37 had gone all in on a campaign to educate the people of California about the dangers of GMOs, this would have inevitably revealed that the “natural” food that people were already buying and eating was contaminated to the hilt with GMOs.

And that would have been bad for business.

There were many people at lower levels of the YES ON 37 campaign who wanted to educate the people of California about the dangers of GMO food.  But they were rebuffed.

Face it, some big natural food sellers in America have accepted the presence of Monsanto and other GMO crocodiles as permanent fixtures in the landscape.  These food sellers reason this way:

“We sell organic food, which is free from all but small traces of GMOs.  That’s what we offer to those who don’t want GMOs.  All our “natural” products?  That’s GMO territory, and there is nothing we can do about it.”

In any election campaign, you go after the undecided vote.  Everybody else has already made up their minds.  In California, the undecided people were on the fence because they didn’t know why labeling GMO food was necessary.  They needed to be taught.

But that wasn’t the major thrust of the YES ON 37 campaign.

People needed to know they should want labeling because eating GMO food is dangerous.

The people of CA didn’t get that message loud and clear.  It wasn’t delivered with great energy and power.

People who already understand the GMO issue and what Monsanto is doing to the planet assume millions of other people know, too.  They see the YES ON 37 campaign as the first big wedge into other states and other campaigns.

They don’t realize how many Americans don’t have a clue about GMOs and Monsanto.

The big-shot suits from the YES ON 37 campaign better take a long hard look at the pollsters and advisers they’re using.  When those pollsters tell them, again, in other states, to focus only on “the right to know what’s in your food,” they should stop and ask themselves:

Whose side are these pollsters really on?

And the non-organic “natural food” sellers?  Whose side are they on?