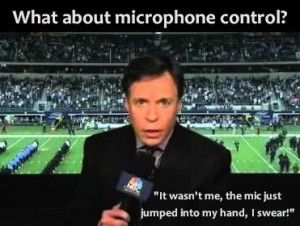 Critics of gun ownership like to play with comparisons between crimes prevented and crimes caused by people with guns.  But this is specious reasoning.  The people with weapons who prevent a crime upon themselves are doing something good.  The people who commit a crime using a gun are committing a crime.  Those are two different worlds, as anyone with a few working brain cells will recognize.

And of course, the people who use a gun to commit a crime would be able to obtain a weapon even if guns were outlawed.  I thought we had firmly established this by now.  I guess not.

Anyway, Bob Costas hears about murder and he wants to blame…not somebody, but something.  This could be called an object fetish.

Let’s try guns.  Yes, guns.  They jump up all the time and kill people, even when they’re locked in a safe.  Isn’t that right?

Guns are firing at random.  You’re carrying a gun in your glove compartment and it leaps out and opens the window and pops a pedestrian.  Yes.  Happens all the time.

So take away the guns.  No one has the right to shoot an intruder in his home.  He should instead signal the thief or rapist for a time out and call 9/11 and wait.  Yes.

We need a test that predicts who is likely to shoot his girlfriend.  Then we stop him from getting a gun.  We put him under 24/7 surveillance to make sure he doesn’t get a gun.  This would be a way to create new jobs in a down-economy.

Or how about this?  Spy on everyone all the time.  Track their phone calls, emails, texts, purchases, travel.  Fill the sky with drones and the homes with smart appliances that watch people day and night.  Whenever a gun appears, or the possibility of getting a gun rears its ugly head, we vaporize that person.

No, Bob.  I suggest staying with what you know.  Something like this, which I just scripted for you:

“I remember the summer of 1961 when the Mick and Roger Maris were going at it every day, trying to break the home run record.  I was nine.  I was at Yankee Stadium on a hot day in August, and Mickey walked by our seats during batting practice.  He winked at me.  I felt my heart flutter and I nearly fainted.  Recovering, I said, ‘Mickey, some day I’m going to interview you on national television.’  He stopped walking and turned and looked at me.  He grinned and said, ‘Son, I’ll be waiting.’

“Well, sports fans, here I am today.  And you know what?  Mickey didn’t have a gun.  Never did.  Neither did Hank Aaron.  Neither did Willie Mays.  Mickey was a heavy drinker, but he didn’t have a gun.  There’s a lesson for all you kids out there.  If you drink, don’t shoot.  Get vaccinated.  Stay in school.  Don’t have sex without a condom.  Recycle all plastic.  If you have to shoot somebody who just broke into your house, use a water pistol.  Better yet, reason with him.  Tell him he’s from a broken home and that’s why he’s doing what he’s doing.  You’d be surprised at how often that works…”

Bob also makes a strong case for keeping guns out of the hands of young hormonally-driven athletes.  The guns sense they are owned by such men and respond by firing a few rounds. Exactly how this happens is being studied by the US National Institutes of Health.

Researchers believe studies may lead to breakthroughs about how other objects behave on their own, without prompting by human agents.  For example, a syringe loaded with vaccine could be modified to follow a person when he gets out of his car and inject him with life-saving substances.

“Some day,” said Dr. Richard Hoglipper, “we might even be able to train guns so they wouldn’t fire on their own.  They wouldn’t jump out of a holster by themselves and kill someone…”

While I’m at it, kudos to another “sports journalist,” the inimitable Jason Whitlock, who claims that “the NRA is the new KKK.”  Al Sharpton wishes he’d thought of that one.

Apparently, Whitlock believes the NRA, which supports gun ownership, is actually plotting to put those guns into the hands of black people, so they can kill each other.

This would explain why so few white people come to gun shows and buy weapons.