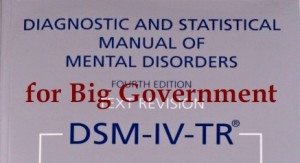 Modern psychiatry is based on the premise that there is something wrong with almost everybody.  But when it comes to dependence, psychiatry takes a distinct back seat to big government.

Psychiatry and big-government actually share a bed.  They both need dependents; otherwise, they’d fade away.  In this pornographic intimacy, psychiatry functions as a medical and cultural salesman and PR hustler.

It ensures a steady supply of diagnosed and designated victims for government.

Dr. Marcia Angell, for two decades the editor of the most prestigious medical journal in the world, The New England Journal of Medicine, wrote a devastating piece on psychiatry for the The NY Review of Books.

In the “The Epidemic of Mental Illness: Why?”, Angell points out that a staggering 10% of Americans at least seven years old take antidepressants.

She also reveals that these drugs, observed to increase levels of a neurotransmitter called serotonin, were the springboard for claiming that depression was caused by a serotonin deficit.  In other words, the whole theory of depression was invented backwards, to fit what the drugs were doing.

This would be somewhat like saying the flu is caused by a lack of Tamiflu in the body.

That was “the science” behind the whole chemical-imbalance theory of depression.

“We’ve got this drug (Prozac) that raises serotonin levels, so let’s say depression is caused by a deficit of serotonin, and let’s sell that idea.”

Angell cites a study done at the National Institute of Mental Health (a federal agency) showing that 46% of randomly selected adults qualified for a diagnosis of mental illness, according to the definitions of disorders established by the American Psychiatric Association.

This is victim-creation at its finest, especially since none of the official 297 mental disorders are diagnosed by any chemical or biological test.  They are merely menus or checklists of behaviors.

This would be like going into a doctor’s office for a conversation, after which he brings in a team of doctors who sit around and discuss what you said, take a vote, and decide you have cancer.

The class of psychiatric drugs called anti-psychotics (or major tranquilizers), including Risperdal, Zyprexa, and Seroquel, is now the best-selling class of meds in the US.

Going back two decades, perhaps the number-one person in America dedicated to the psychiatric hustle was, indeed, a government representative.  Wife of a two-term president, then senator, now secretary of state, Hillary Clinton campaigned tirelessly for accepting the diagnosis of mental illness “without stigma.”

She led the way; others followed.

The objective was to enable a cultural revolution.  “We’re all victims.”  “We all have some kind of mental problem.”  “We all need treatment.”

The revolution succeeded.  And in its wake, big government could and did expand the theme of dependence.

Angell, in her highly readable article, makes a further point that is often overlooked.  At one time, patients diagnosed with schizophrenia and depression experienced relatively brief episodes.  But with the onset of the drugs for treatment, patients now find themselves dealing with chronic conditions.

The obvious conclusion?  The drugs are creating abnormal brain function.

Chronically debilitated patients are a perfect set-up for big-government dependence.

In his book, Anatomy of an Epidemic, Robert Whitaker provides the capper: in 1987, 1.25 million Americans were on government disability as a result of mental illness.  By 2010, that figure had risen to 4 million.

Yes, big government and psychiatry are in love.  And it isn’t pretty.

The formula for creating this ever-expanding dependence?

One: Continually add new mental disorders to the official list.  These labels have no basis in reality.  They aren’t accompanied by any  diagnostic tests.  But they enable many more people to be assigned a mental illness.

Two: Prescribe drugs that are, in and of themselves, destructive and debilitating, and therefore create long-term patients.

Three:  Deny the drugs are the culprits.  Blame the deterioration of the patient on his “mental disorder.”

Four: Encourage a culture in which patients think of themselves as struggling to “regain normalcy,” but need constant outside help for the rest of their lives.

For detailed evidence that psychiatry is an arbitrary pseudoscience, and for an introduction to evidence that the prescribed drugs are toxic, see my previous articles:

The author of an explosive collection, THE MATRIX REVEALED, Jon was a candidate for a US Congressional seat in the 29th District of California.  Nominated for a Pulitzer Prize, he has worked as an investigative reporter for 30 years, writing articles on politics, medicine, and health for CBS Healthwatch, LA Weekly, Spin Magazine, Stern, and other newspapers and magazines in the US and Europe.  Jon has delivered lectures and seminars on global politics, health, logic, and creative power to audiences around the world.  You can sign up  for his free emails atwww.nomorefakenews.com