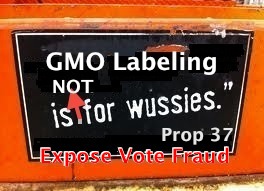 An email sent to one person from a significant member of the YES ON 37 campaign thinks I’m getting in the way.

“I find John’s [sic] article to be disrupting to the healing that has to take place.”  That’s the quote.

Whose healing?  The staff of the YES ON 37 campaign?  The people of California, who won’t be able to tell whether the food they’re eating is genetically modified?

Much more importantly, this YES ON 37 leader writes:

“The reports of voter fraud are, to date, urban/internet legends created by folks who don’t understand the system.”

Really? What is the system?

To enlighten us, the author of this email offers a link to the California Secretary of State’s website, where we learn that vote counts always continue long after election night.

Well, of course they do.  I never disputed that.  However, the Secretary of State’s general statement refers to “hundreds of thousands of votes” that, typically, have to be counted after election Tuesday.

The actual figure, for Prop 37, is 3.3 million uncounted votes.

And apparently, while votes are still being counted, the total of uncounted votes in CA doesn’t seem to be changing on the Secretary of State’s website.  Odd.

Prop 37 has not yet been defeated.

So excuse me if I’m interrupting the healing, but the fight isn’t over yet.

Furthermore, anyone who cares to investigate “the system” can see that the opportunities for vote-fraud are everywhere.  It’s not an urban legend.  For starters, go to blackboxvoting and read everything you can find.

Here’s a clue.  The “experts” who are advising YES ON 37 make their living by accepting all vote-counts as real and honest and correct.

Otherwise, they couldn’t make wise predictions.  They couldn’t make a living.  These “experts” have to believe in the system and support it.  When it comes to multiple avenues of fraud, they’re lost.  They’re in the dark.  So they have to pooh-pooh the possibility of fraud.  Get it?

I’d really like to meet the experts who are advising YES ON 37.  I really would.  Here’s a thought.  I’ll bring my vote-fraud researchers to the party, and we can have a debate.  I know a great radio show that has about 700,000 listeners.  We can lay it all out.  Fraud vs. no-fraud.  Let’s get it on the table.  Feel free to accept my invitation.

This email correspondence from a YES ON 37 leader goes on: “I think it’s time for us to acknowledge that we did not get the votes we hoped to due to a lack of funding and ability to get the word out.  We need to accept it, move through all the stages if [of] grief and then turn that anger into more action.  We are regrouping and not stopping.”

Stages of grief?  Was I just rocketed into an Elisabeth Kubler-Ross seminar?

How about the stages of challenging the forces of evil?

This is not over.  The absurdly early call against Prop 37 on election night was a fraud.  At the time it was made, there were perhaps six million votes uncounted.  Maybe more.

And given who is behind NO ON 37—corporations who want to own the food supply of the planet—why should we assume the past, present, and future votes in this campaign are true and honestly recorded?

Disruptive is exactly what we need to be.

And when the count is finished, in several weeks, a recount must be done.  To guarantee we’ll get an honest number?  No.  To provide a chance (maybe) to spot a piece of fraud that could lead to another piece of fraud.  And to cause a good piece of trouble.  To stir the pot.  To see what rises to the surface.

Here is another quote from the YES ON 37 email: “…do you really think that if we thought fraud was going on, we would not investigate it?”

YES ON 37 obviously does not think there is vote fraud here, but they should.

Many, many elections are called early by the television networks.  YES ON 37 isn’t the only one.  But that doesn’t mean those calls are honest.  That doesn’t mean we should lie down and take it.

On election night, shortly after the polls closed in the state of Washington, the networks started making early calls on various winners.  But in that state, no one goes to the polls and votes in-person anymore.  All votes are sent in by mail.  To qualify, they must be postmarked no later than election day.  So how the hell did a network make an early projection about anything?

There is rampant fraud in America’s election system.  Prop 37 is an example.  A week ago, media outlets sent 37 crashing down to defeat with their projections.  Yet, days later, there are still 3.3 million votes uncounted.  Does that make sense?  Does that lead us to feel warm and comfortable about the votes that have already been counted?

Correct me if I’m wrong, but on election night, after the polls closed in California, the networks began to report very big leads for NO ON 37.  Boom, right out of the gate.  Where did those votes come from?  We need to know.  Were they absentee ballots?  If so, had they been sent in from overseas?  Were they, yes, ghost votes that just jumped up on machines out of nowhere?

Because as the night continued, YES ON 37 started catching up.  Bit by bit, that big lead eroded.  And then, when YES ON 37 was at 47%, bang, it was over.  The networks called the race against Prop 37.

YES ON 37 is obviously relying on someone to give them expert advice on the vote-count, and whoever that is, he/she has told them they’re toast.

In a previous article, I reported on another email sent out by a YES ON 37 worker.  It stated that the fight was over because, get this, the votes that were still uncounted were “early votes” that most probably had been cast when the NO ON 37 forces were swinging into gear with their negative ads.  Therefore, those early as-yet uncounted votes had probably succumbed to the NO ON 37 propaganda.

Man, if that is expert advice, an ant is piloting a rocket ship to Mars.

The Organic Consumer’s Association has just released a statement that they are monitoring the vote-count and may choose to challenge it when it’s done.

I urge them to not to accept the numbers we’ve been given so far.  Don’t simply take what the state of California feeds us as the current count or the final count.

People have been told that “election observers from both sides” guarantee the vote-count is honest.  That’s nonsense.  When fraud is done electronically, observers see nothing.  There is nothing to see.

People have also been told that, with the current difference between the YES votes on 37 and the NO votes, YES can’t possibly win.  Counting the rest of the votes won’t swing the election over to YES.  But you see, that assumes the current difference is true and factual.  It assumes that YES ON 37 is currently trailing by about 600,000 votes.  Don’t accept that.  Don’t assume that’s true.

I can’t believe the naivete of some people.  They’re stepping into a lion’s den where the lions are corporations like Monsanto, who would do anything to win an election, and yet these fantasists assume “the system is working.”

“Oh, yes, the vote-count is honest.  Of course it’s honest.  We fought the good fight and we lost.  We have to grieve and move on and regroup and mount another campaign.  We lost the vote.  Just look at the reported numbers.  There’s no way we can win.  We played fair, everybody played fair, and we went down to defeat.”

Do you think this is a picnic and a game of softball in the park?  Do you think everybody is nice and nicer and nicest and plays by the rules?

“Yes, we entered the system to do battle against the most evil force on the planet.  In this sacred system, we played fair.  And so did they.  You see, they are evil every day in every way, but when they get into an election, they are magically transformed.  It’s wonderful.  They are suddenly honorable.  And they won, fair and square.  We lost.  It was a beautiful thing.  The system worked.  This is America.  It may have its flaws, but it’s the best system ever devised in the history of the world.  I learned that in fifth grade.  Bush didn’t cheat when he ran against Gore.  Bush didn’t cheat when he ran against Kerry.  That was just a fairy tale.  And Chicago?  No one has ever cheated in a Chicago election.  And the television networks, who make early projections of winners before you can even blink?  They would never cheat or lie.  Of course not.  The media lie every day when they report the news.  But on election night a little fairy descends on them and they become righteous and good.  We know we’re trailing by 600,000 votes because that’s what we were told, and we always believe what we’re told.  We’ve done the math, based on what we’ve been told, and so we know we’ve lost.  Our experts have assured us we have no chance of winning now, in this fair and honest system.”

Over the years, I’ve met some of these experts.

“Look, see what the figures are here?  You’re behind by half a million votes.  Now, if you calculate the percentages on the votes still to be counted and divide by six and multiply by eight, you get half the age of my mother.  Then add six and it all comes clear.  Your chance of winning is less than two percent.”

And he says, “Because my job and my paycheck depend on everybody believing the vote-count is real and not fake.”

Figuring out the details of a particular fraud needs pros.  Real ones.  Not fake ones.

YES ON 37 has apparently finished with its work on 37.  The baton is passing.

One thought on “YES ON 37 SAYS: RAPPOPORT “DISRUPTING TO THE HEALING THAT HAS TO TAKE PLACE” by Jon Rappoport”