Do we really need more legislation to end the obesity epidemic? How about better zoning? A soda tax? The same people in government who subsidize obesity now want to tax it. Is it any wonder that the Founding Fathers and Framers of the Constitution wanted to limit the size, power and scope of government? Less damage from morons who think that they know better how to run your lives than you do.

Debbie Catron’s grandson was vaccine-inured. Then it was Debbie’s turn. She died 3 times after getting the flu shot and now is paralyzed from the waist down. This is a story of death by vaccination. October 15, 2009 began her long journey of recovery after being injured by a flu vaccination. That was the day she died (3 times). November 22, 2009 Debbie was hospitalized for paralysis and the doctor confirmed it was from the flu shot. The months that followed were spent in the hospital and a nursing facility. Her health declined and she was sent home on hospice status. Debbie will share how her life was saved by methods used her daughter to help her grandson who has Asperger’s Syndrome. This was not the end of the journey. She is still struggling to put her life back together after the vaccination tried to end it. This is an incredible story that must be told! We’ll also preview the upcoming Autism One Conference in Chicago May 23-27, 2012, where Debbie will also be a featured speaker. http://www.autismone.org/content/autismone-generation-rescue-conference-2012 and Debbie Catron received her degrees in elementary education from Eastern Illinois University. She taught in the Danville, Illinois school district for 35 years. She has spent the past 15 years studying brain friendly education. This included how to teach children with special needs. Catron continued to teach 4th grade until a vaccine SHE received then changed her life forever. http://www.autismone.org/content/ides-october-how-my-grandson-saved-my-life

Isn’t it interesting that the old media marginalizes a candidate who speaks up against the Federal Reserve? Is there a pattern that can be identified? Clear as crystal. Where are the other “Ron Paul-like” candidates out there running for office? There are more everyday and one of my favorites returns to The RSB Show today for a political healing update! Glenn Addison is running to be a Senator from Texas and he’s up against the globalists! Glenn stands for farm freedom, food freedom and state sovereignty. Out of the U.N.? Check. End the Fed? Check. Are you in Texas? Glenn needs your help. Even elements of the Tea Party have been corrupted, but Glenn Addison has not. Imagine if there were another principled defender of liberty in the U.S. Senate! http://www.glennaddison.com/ Who’s running against Glen? http://www.youtube.com/watch?feature=player_embedded&v=eDl-ARluL7Y Tom Mullen, author of “A Return to Common Sense” drops by to discuss the media’s bizarre treatment of Ron Paul. What is the corporate-controlled media not telling you about the race to the GOP nomination? Has Ron Paul really hi-jacked the process, or has the 1st Amendment been hi-jacked by globalists who do not want a return to small government rooted in the protection of individual liberty? 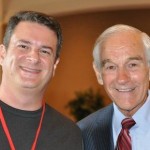 Why do they use terms like gadfly, arcane, quixotic and fringe when describing the Ron Paul campaign for the presidency? Do you think that they’re scared that he actually might win? According to the mainstream media all the candidates who have already dropped out could have won, but the one who is still in it, winning delegates and gaining momentum has “no chance.” Yep, they’re scared. Let’s see what we can do to keep it up!

Call us at 1-866-939-BELL (2355) with your questions or comments! The question of the day is about Shingles (answers here: Homeopathic Herpes Zoster Varicella nosode, Rhus tox., Silver hydrosol and more) We’ll also cover a cool listener post to The RSB Show web site about what pharmacies are really doing to keep old people on drugs!

Ron Paul keeps winning in spite of the media… http://communities.washingtontimes.com/neighborhood/reawakening-liberty/2012/may/8/media-just-wont-let-ron-paul/

Is it your fault that you’re obese? IOM says we need more legislation, or maybe soda taxes, or maybe better zoning laws. Anything except that which would work… http://news.yahoo.com/obesity-fight-must-shift-personal-blame-u-panel-123320915–sector.html

And now for a collegiate Moment of Duh… http://news.yahoo.com/healthier-eating-keep-fruits-veggies-within-reach-210611399.html

How “Tea Party” is the Tea Party Express? Is this a Republican-establishment teat party? Texas senatorial candidate Glenn Addison calls them out… http://trailblazersblog.dallasnews.com/archives/2012/05/addison-rips-tea-party-express.html

The enthusiasm defies description as Romney, once again, draws thousands, er, dozens, to his rally… http://www.dailypaul.com/231710/picture-massive-romney-gathering-in-ohio