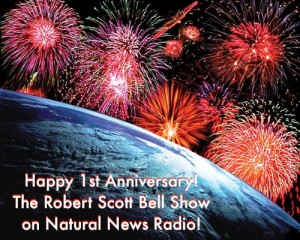 As we begin our second year on Natural News Radio, will RSB see his shadow? Mike Adams returns to celebrate with us the growth of new media and the message of The Robert Scott Bell Show! We’ll talk history past, present & future, as well as Ron Paul and the ongoing revolution in which we currently live.

Here are some of the stories we plan to cover on today’s 1st Anniversary Edition of The RSB Show today:

FDA claims your stem cells may be an unapproved new drug! http://www.anh-usa.org/fda-new-claim-body-is-a-drug/

Don’t want to have babies and you don’t like Bill Gates? How about zapping your own testes? http://abcnews.go.com/Health/testicle-zap-future-birth-control/story?id=15472917

As predicted, pediatrician’s group recommends Gardasil for boys, too. The AAP never met a vaccine that it did not want to inject into every child and infant… http://www.wthr.com/story/16649263/pediatricians-group-recommends-hpv-vaccine-for-boys

What is the most prolific cause of thyroid cancer? Doctors. Their radioactive dyes and scans are actually causing the disease they are designed to detect! http://www.naturalnews.com/034835_thyroid_medical_scans_radioactive.html

You want to go to the Super Bowl? Get in line to get radiated first. Not here, not now, not ever. http://www.infowars.com/full-body-scanners-at-super-bowl-2012/

What would our one-year anniversary on Natural news Radio be without at least one Moment of Duh? This one has to do with preventing birth defects… http://old.news.yahoo.com/s/hsn/20120131/hl_hsn/whenmomtobesoverweightandsmokesriskforbirthdefectsrises

Did you know that the same banksters that got bailed out by Bush and Obama support Mitt Romney as well? Read this amazing story to see hoe deep the economic-enslavement rabbit-hole goes. Free your kids and grandkids from bankster bondage now with some Justice for an American Patriot! http://americaforpaul.wordpress.com/2012/01/23/poetic-justice-for-an-american-patriot/

In case you missed my broadcast from Sunday (01/29/12) http://www.robertscottbell.com/?p=5541 on GCN from this past Sunday, with nutritional historian Chris Barr and RSB on cadmium toxicity, selenium deficiency, health insurance costs and more, you can still listen to it here: http://www.gcnlive.com/programs/robertScottBell/archives.php