Thursday on The Robert Scott Bell Show 3-5PM EST: Mike Adams is back for another update on the victory for citizen activism in maintaining a safe food and supplement supply, free of dangerous levels of heavy metals. David Peterson appears on The RSB Show for the first time to introduce the Body Tune Up Shop! Liam Scheff explains why HIV tests cannot determine the presence or absence of HIV and discusses a study that calls into question its sexual transmissibility. John Strangis joins in to further dismantle the HIV test industrial drug complex. Call 1-866-939-2355 with your questions or comments! Listen in at www.NaturalNewsRadio.com.

Mike Adams is here to reveal a history-making announcement has just been released by Natural News, describing a natural products industry agreement which would strictly limit the level of heavy metals allowable in popular raw vegan superfood protein products. Both Garden of Life and Sunwarrior joined the unprecedented agreement, committing to achieving the specific heavy metals limits in their protein products by July 1, 2015. Boku Superfood immediately signed on to the agreement after it was first announced.

David Petersen is a physiotherapist and Licensed Massage Therapist and the owner and founder of The Body Tune-up Shop.

He received his Bachelor of Science in Exercise Science with additional majors in Physiology and Biochemistry from the University of Stellenbosch, South Africa. He also received a post-graduate degree in Sports Medicine from the prestigious Sport Science Institute of South Africa at the University of Cape Town as a final phase exercise rehabilitation specialist known as a “Biokineticist”.

Professor Tim Noakes MD – one of the most respected exercise scientists and sports physicians in the world was David’s mentor at the Institute. They worked closely together and Dr. Noakes encouraged David and other students to “think outside the box” and to question existing theories in exercise science and physiology.

David was frustrated with the traditional forms of therapy he was witnessing being used in rehabilitation and was even more frustrated that he was using the same techniques himself.

Taking Professor Noake’s advice to heart, David began to question the techniques and methods he was using. He wanted to find out the cause of human dysfunction. He realized that the traditional therapies he has been educated in simply treated the symptom.

In 2006 he was exposed to a technique called “Muscle Activation” through a South African physiotherapist. The results the techniques provided were incredible – so much so David was fascinated by them and researched them further.

David discovered that Muscle Activation had its origins in acupuncture so he obtained his Massage Therapy credential and studied acupressure as a means of achieving the same results but with without the risk of using needles and developed a technique he called “Myotonix”. Recently, David began using cold laser or low level laser light therapy (LLLT) as a means of treating the acupressure points without the typical pain associted with it. 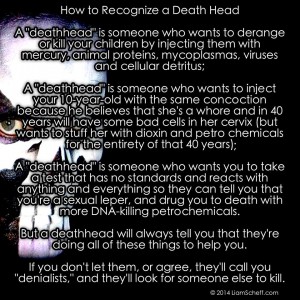 A “deathhead” is someone who wants to derange or kill your children by injecting them with mercury, animal proteins, mycoplasmas, viruses and cellular detritus;

A “deathhead” is someone who wants to inject your 10-year-old with the same concoction because he believes that she’s a whore and in 40 years will have some bad cells in her cervix (but wants to stuff her with dioxin and petro chemicals for the entirety of that 40 years);

A “deathhead” is someone who wants you to take a test that has no standards and reacts with anything and everything so they can tell you that you’re a sexual leper, and drug you to death with more DNA-killing petrochemicals.

But a deathhead will always tell you that they’re doing all of these things to help you.

If you don’t let them, or agree, they’ll call you “denialists,” and they’ll look for someone else to kill.

Chef and naturopath John Strangis joins the healthy debate to eliminate the cause of HIV: HIV tests. Check out John’s YouTube channel by clicking here.

Responding to your issues with HIV transmission in the Padian (and other) studies.

I think if you wanted to review the Padian paper, instead of quoting a video or theatrical movie that I did not write or edit, or a ‘teaser’ for a talk, you’d care to get a fuller treatment.

But I also include realities which you ignore:

You skipped over the 26% who were screwing condomless throughout. You ignore what it means.

I don’t cite the “retrospective” as the “prospective,” which is what you seem to be doing. I do say that there are two parts to the study. I’ll certainly make a bigger deal of it from now on, because I think it goes to the weakness of your argument.

This is obviously a joke. A sexual plague does not occur because of 9 out of 10,000.

They were unable to come up with such a “reliable” figure for males. I believe they stated that they were in agreement, more or less, with other papers. (This is called “confirmatory bias,” by the way. They found the conclusion that they sought.) That being: 1 in 5,000 to 1 in 8,000. That is, a male gets to have sex with a “pos” female 8,000 times, on average, before turning “pos.”

If you bang a prostitute named “Chlamydia” on the way back to King’s College, you’ll very quickly find your john thomas has an itch. You don’t get 7,999 more goes before you notice something. Or 1,000.

But, all of those numbers are fake, obviously. Statistics strung out along confidence intervals.

The real number is this, and it’s what I always say in my talks:

There is no transmission. There are two people each given non-specific tests. Tests that happen to come up ‘reactive’ more often in people with high antibody titers (volumes) in their blood. Extreme poverty and its diseases, and drug abuse are the surest ways to get there. Keep out the starving poor, and the drug addicts, as Padian did, and you keep out, by and large, the ‘pos’ results.

And that’s what I think. If that seems crazy to you, then I assure you, you seem crazy to me, too.

Comment of the Day: “Scientists”, what a wonderful term. Includes all disciplines, including those who have no more training than V. Shiva (that is, none) but use the moniker to appear awesome in interviews.

I preferred when nobody called themselves “scientists”, and one could merely claim to be a “person of science”. Far more humble, and demands more of the listener to verify the ability of the person to speak with accuracy. At this point, anyone can be a “scientist” if the

listener desperately wants what they’re saying to be true. ~ Cathal