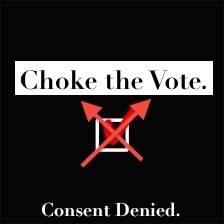 I’m writing because I believe you, as the Libertarian Party candidate for president, can perform a great service for the country.

As you know, there is a growing awareness across America that a vote for Obama or Romney is not going to get us where we want to go.

It’s only going to worsen the situation we’re in.

The Libertarian Party fully understands that the Democrats and Republicans—the one Party with two heads—have been violating the Constitution at an egregious level for decades.

The whole notion of limited central government, on which the American Republic was founded, is now buried under mountains of illegal laws, regulations, and practices.  To spell out a complete bill of particulars would take years.

Now is the time for us to take public action, and I believe that action can best be capsulized as: Choke the Vote.

Don’t vote in this presidential election.  Don’t vote for anyone.

Let those of us who are aware stand up and say, “We’re not voting for Obama or Romney.  We don’t want either one.  And if you are voting for either candidate, it’s you who’ll shoulder the responsibility for what the eventual president does to make things worse.”

Let’s place the burden where it really is.

Gary, you could, in one stroke, make more of a difference in this election than through all the campaigning you and the Libertarian Party are doing.  You could tell your supporters, your Party, and all America: DON’T VOTE.  DON’T VOTE FOR ME.  DON’T VOTE FOR ANYONE.

You could further urge other third-party candidates to tell their followers the same thing.

“In this election, don’t vote for me.  Don’t vote for anyone.  This time around, that’s what I’m campaigning for.”

Contrary to the notion that this amounts to political suicide, it could galvanize thousands, maybe millions of Americans, who are sitting at home grumbling about Obama and Romney, who are profoundly dissatisfied, as they try to figure out what to do about the dilemma they’re facing.

We’re not as small a group as some people imagine.  If a spark is created, we could ignite a dormant sense of outrage that has been boiling under the surface of the population for years.

We could make ourselves known.  We could state our case, connect, and show our true preference by staying home on election day.

Since we can’t go into the voting booth and select “none of the above,” we need to make our voices heard beyond the ballot.

How many people, in the wake of the first presidential debate, saw their worst fears realized?  How many people shook their heads and said, “I don’t trust either candidate”?

How many people would like to feel their no-vote could send a clear positive message?

How many people retain enough knowledge of the Constitution to know that each of these candidates is planning to keep violating that document if he is elected?

How many Americans who know nothing about the Constitution feel in their gut that Obama and Romney would keep leading us down the wrong path?

We should do all we can to legitimize that feeling, because it is real, it is true, and it is distinctly necessary.

The Democrats and Republicans have been asserting a monopolistic chokehold on the government for a very long time.  Through incessant promotion to vote, through PR about “the lesser of two evils,” and in other ways, Americans have been made guilty about withholding their consent from the two-party system.

When are we going to say Enough?

Gary, a vote for you as president, a vote for what you stand for as a Libertarian, is a good thing.  But consider that the best thing is you taking one step further on the road, in 2012, and leading a grassroots revolution.  Now, make a course correction and run on a platform of DON’T VOTE.  DON’T VOTE FOR ME.  DON’T VOTE FOR ANYONE.

Apply a shock to the system.  Express how profoundly you feel about what the two major parties have been doing to the American Republic.

It doesn’t matter whether, in the wake of your announcement, we would suddenly hear ten supporting voices or ten thousand.  What matters is that we start.

Let all the counter-rhetoric flow.  Let the critics who demand that we vote say what they will.  It will give us a chance to point out the flaws and lies in their pronouncements.

Does the government, as represented by Democrats and Republicans, own this country, or do we?  Are our authentic voices confined to choosing between two alternatives that don’t reflect our best thoughts and desires?

Is that our diminished and subservient role?

I hope you’ll give these issues some thought.

And to all free-thinkers, independent citizens, and artists everywhere, I hope you’ll take up the banner of CHOKE THE VOTE in your own imaginative and compelling way.  Somewhere up the line, we could see the moment when so many people stay home on election day, the nation will come alive with the No Confidence its citizens righteously express.

We can say, “We can’t do anything,” or we can do something.