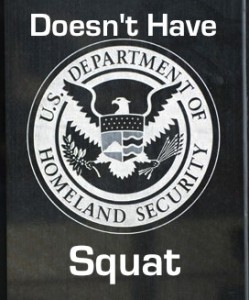 In 2003, Congress began pouring money into a program of fusion centers.  These 70 outposts, scattered across America, were supposed to coordinate federal, state, and local efforts to gather counter-terrorism intelligence.

You know, to protect America against al-Qaeda.

The lead agency in this program is the US Dept. of Homeland Security (DHS).

Now the Senate Permanent Committee on Investigations has issued a chilling report on how this has worked out.  Buckle up.

First and foremost, the report indicates that DHS has claimed certain fusion centers exist that don’t exist at all.  This should give you a clue about what we are dealing with.

Here is the exact statement from the Committee: “…DHS officials asserted that some fusion centers existed when they did not.”

The Committee also found that DHS hid their own “evaluations highlighting a host of problems at fusion centers and in DHS’ own operations.”

Or in plain language: a) we screw up big-time; b) we cover it up.

But even with all this lying, surely the fusion centers produced useful intelligence, right?

“…the Subcommittee investigation could identify no DHS reporting which uncovered a terrorist threat nor could it identify a contribution such fusion center reporting made to disrupt an active terrorist plot.”

It gets even worse.  For the period between April 1, 2009, and April 30, 2010, a third of all fusion center reports weren’t even published for use by DHS or other US intelligence agencies.  Why?  Because the reports often “lacked any useful information or potentially violated department guidelines intended to protect Americans’ civil liberties or Privacy Act protections…”

In fact, the Committee found, DHS launched an internal review of its own actions that specifically infringed on citizens’ privacy and civil liberties, but the review was extended in time, in order to conceal “most of the troubling reports” and keep them “from being released outside of DHS…”

As the capper on the Committee report, Congressional investigators discovered that “DHS required only a week of training for intelligence officials before sending them to state and local fusion centers to report sensitive domestic intelligence, largely concerning US persons…”

Meaning: incompetent raw DHS employees are deployed to accuse US citizens of being terrorists or aiding terrorists.

The bumbling stumbling fusion centers may actually be evidence of something far more sinister: the real mission of DHS is not intelligence at all, and never was.  Instead, DHS was tasked with creating its own army, to be equipped with hundreds of millions of rounds of ammo, guns, tanks, and the like.  The “gathering of intell” is just a cover story for its ongoing war on the American people.

You can read the Committee report at:

The author of an explosive collection, THE MATRIX REVEALED, Jon was a candidate for a US Congressional seat in the 29th District of California.  Nominated for a Pulitzer Prize, he has worked as an investigative reporter for 30 years, writing articles on politics, medicine, and health for CBS Healthwatch, LA Weekly, Spin Magazine, Stern, and other newspapers and magazines in the US and Europe.  Jon has delivered lectures and seminars on global politics, health, logic, and creative power to audiences around the world.  You can sign up for his free emails at www.nomorefakenews.com