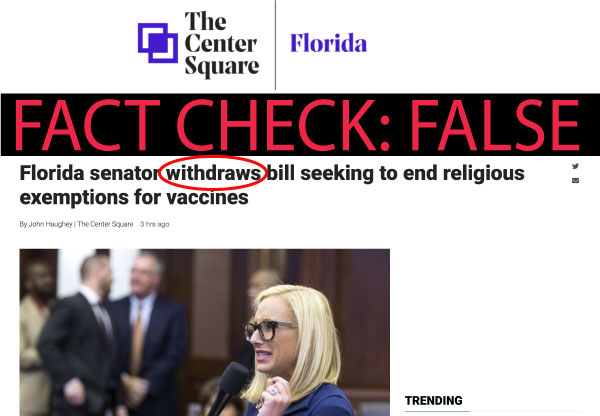 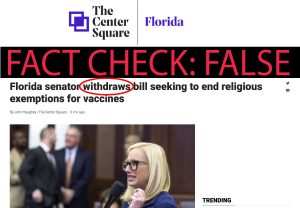 FACT CHECKING FL’s FAKE NEWS: Lauren Book’s SB 64 ‘Mandatory Vaccine’ Bill Was NOT Withdrawn, Can STILL BEHeard An article published on The Center Square by John Haughey titled, “Florida senator withdraws bill seeking to end religious exemptions for vaccines,“ is making the rounds, despite the fact that it is rife with misinformation. Democratic Senator Lauren Book’s bill has not been withdrawn; nor was it withdrawn because Health Policy Chair Senator Harrell (R) refused to hear it. We confirmed this today by speaking with staff both at Senator Book and Senator Harrell’s offices. Senator Book prefiled Senate Bill SB 64 on August 2nd. SB 64 bill intends to “delete” the religious exemption to vaccination for school entry and would render the process to obtain a medical exemption more difficult, if not impossible, by replacing the doctor-patient relationship with a State run medical review panel. In essence, SB 64 would recreate in one full swoop the dystopian medical crisis that has descended upon Californians, culminating in last month’s passing of SB276. 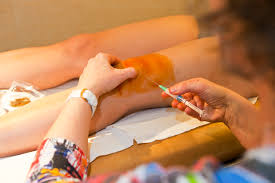 Common joint pain treatment may be more harmful than thought A common therapy for joint pain may not be as safe as experts believed, according to a new report published Tuesday. Corticosteroid injections are often given to reduce pain and inflammation from osteoarthritis. But these injections may do more harm than good: The report found corticosteroid shots in the hips and knees may accelerate the progression of osteoarthritis and potentially even hasten the need for joint replacement surgeries in the long run, said lead author Dr. Ali Guermazi, a professor of radiology at the Boston University School of Medicine. “The intra-articular corticosteroid injections in the hips and knees are not as safe as we thought,” Guermazi, whose paper is published in the journal Radiology, said. It’s estimated that more than 30 million Americans have osteoarthritis, a chronic condition that causes cartilage loss, joint inflammation, pain, swelling and, in severe cases, bone destruction, according to the Arthritis Foundation. 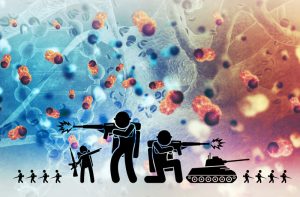 Casting cancer as a ‘war’ or ‘battle’ may harm health, study finds Cancer is often cast as a “battle” or a “war” that should be foughtand won to motivate patients to overcome thdisease, or encourage people to make healthy choices that could prevent it. However, psychologists at USC Dornsife College of Letters, Arts and Sciences and Queen’s University have found that the battle and war metaphors for cancer may have the opposite effect. “We found strong evidence that battle metaphors and war metaphors reduce your willingness to engage in these ‘soft’ prevention behaviors,” said Norbert Schwarz, Provost Professor of Psychology and Marketing at USC Dornsife. 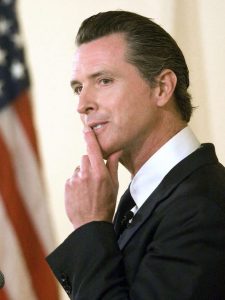 Gavin Newsom Supports New Anti-Vaxxer Tax Governor Gavin Newsom declared his support of a controversial new tax aimed at California’s growing anti-vaccination movement. The legislation, proposed by Democrat State Assemblyman Richard Pan and two others, seeks to levy a tax on parents who refuse to vaccinate their children. “You need to let go of your fear and anxiety of being judged by others,” said Governor Newsom on the step of the Sacramento Capitol building, “If you’re trying to understand why it is that certain things happen in Sacramento and certain things don’t, at the end of the day, it comes down to the issue of incentives: We do what we’re incentivized to do. And we want everyone in California vaccinated, so this bill is the incentive.” “The Healthy Families Vaccination Act” left the Assembly Health and Human Services Committee late last week, and passed the State Senate with only a handful of Republicans objecting. Governor Newsom says he will sign it immediately. 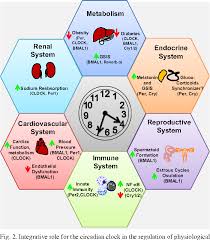 I have a medical background, Morley’s work is very interesting… I wish someone would interview him specifically on the insanity of iron fortification, so it could be shared..