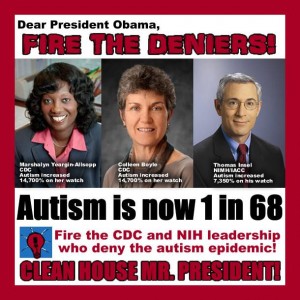 WASHINGTON, May 10, 2011 /PRNewswire-USNewswire/ — The following is being released by SafeMinds (www.SafeMinds.org):

For over 20 years, the federal government has publicly denied a vaccine-autism link, while at the same time its Vaccine Injury Compensation Program (VICP) has been awarding damages for vaccine injury to children with brain damage, seizures and autism. A new investigation, based on verifiable government data, breaks ground in the controversial vaccine-autism debate. The investigation found that a substantial number of children compensated for vaccine injury also have autism and that such cases have existed since 1989, the year after the VICP was formed.

SafeMinds’ Executive Director, Lyn Redwood, RN, MSN comments, “This study dramatically shifts the debate on autism and vaccines.  The question is no longer, Can vaccines cause autism? The answer is clear.  Now, we have to ask, How many cases of autism have vaccines caused and how do we prevent new injuries from occurring?”  The government has asserted that it “does not track” autism among the vaccine-injured.  SafeMinds responds that not looking is the easiest way not to find something.  SafeMinds is calling for immediate federal research into the mechanisms of injury in these children in an effort to protect other children from harm and Congressional action to reform the VICP.

The peer-reviewed study looked at cases of vaccine injury that have been monetarily compensated by the federal Vaccine Injury Compensation Program.  It was published today in the Pace Environmental Law Review.  The study investigated approximately 1300 cases of childhood brain injury as a result of vaccines in which the Special Masters ruled for the plaintiffs, looking for references to autism, symptoms of autism or disorders commonly associated with autism. It reports that twenty-one cases actually stated “autism or autism-like symptoms” in the court records.  The researchers then identified and contacted 150 more compensated families to find out whether the children had autism.  They were able to find an additional 62 cases (greater than 40% of their sample) for a total of 83 cases of autism.  In 39 cases (47%) there was confirmation of autism beyond parental report.

The federal government has called autism a “national health emergency,” conservatively affecting 1 in 110 children and costing the country billions of dollars each year. If a portion of autism cases are vaccine-induced and there is evidence that officials have been “looking the other way,” this cannot be tolerated.  The VICP’s recent attempt to dismiss the over 5000 cases in the Omnibus Autism Proceedings is suspect in light of these new findings based on its own records.

SafeMinds calls on Congress to fully investigate the VICP, the only forum in which parents may bring claims of vaccine injury on behalf of their children.