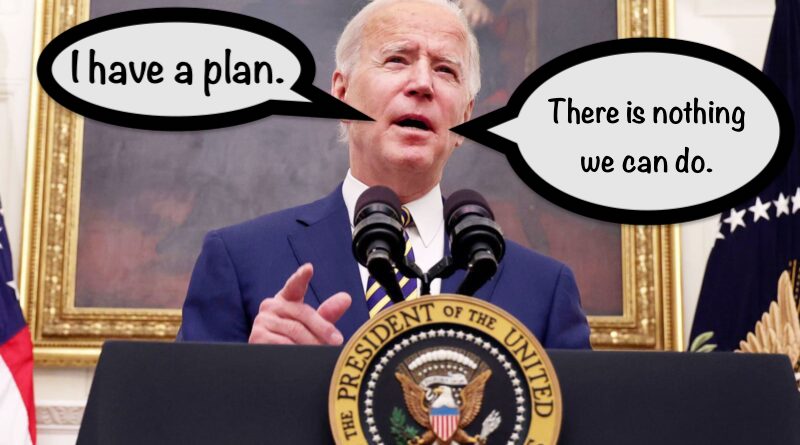 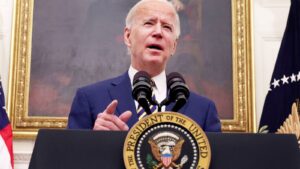 Biden says ‘nothing we can do’ to change pandemic ‘trajectory’ in coming months President Biden provided a grim outlook about the country’s ability to combat the coronavirus pandemic Friday while calling on Congress to move forward with additional stimulus relief measures. Biden addressed his administration’s response efforts during a press briefing on two executive orders meant to provide food assistance to low-income families and protect workers’ rights during the pandemic. Days after the US surpassed 400,000 deaths related to COVID-19, the president warned the country had little ability in the near term to prevent spiking case totals. “If we fail to act, there will be a wave of evictions and foreclosures in the coming months as this pandemic rages on because there’s nothing we can do to change the trajectory of the pandemic in the next several months,” Biden said.

Biden had pledged efforts to jumpstart the US economy and provide aid to struggling Americans would be his top priority upon entering the Oval Office. The two executive orders Friday followed 10 other actions related to the pandemic he signed the previous day, including a mandate requiring masks to be worn on federal land. 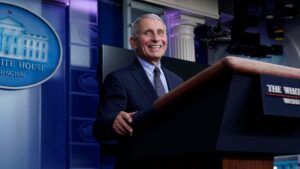 Dr Fauci was ‘knocked out for 24 hours’ with chills, aches and fatigue after getting his second dose of Moderna’s COVID-19 vaccine Dr Anthony Fauci has admitted he was ‘knocked out’ for a full day by his second dose of COVID-19 vaccine. ‘I was hoping that I wouldn’t get too knocked out. I did for about 24 hours. Now I’m fine,’ Dr Fauci said during a Thursday White House press briefing when asked if he’d had his booster shot. The nation’s top infectious disease doctor said he was ‘fatigued. A little achy. You know. Chilly,’ but ‘no sick’ after his second dose of Moderna’s coronavirus vaccine. Those are among the most common side effects of either of the two shots authorized in the US, made by Pfizer and Moderna. But Dr Fauci continued to remind Americans that those side effects are not illness triggered by the vaccine, but the immune system ramping up to fend off the virus. Dr Fauci revealed he got his second dose of the vaccine on January 19. It came 28 days after he received his first dose of the shot on December 22, on live television. He joined the ranks of other officials and high-profile figures whose vaccinations were televised to encourage Americans to get theirs, including President Biden, former Vice President Pence and three former US presidents: Obama, Bush and Clinton. Former President Trump, who had COVD-19 last fall, did not publicly get vaccinated. It is unclear whether he had the shot behind closed doors. 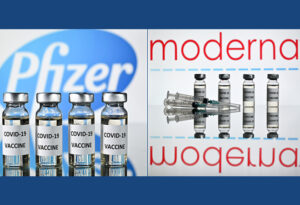 CDC quietly changes Covid vaccine guidance to OK mixing Pfizer and Moderna shots in ‘exceptional situations’ The Centers for Disease Control and Prevention quietly changed its guidance on Covid-19 vaccine shots, saying it’s now OK to mix Pfizer’s and Moderna’s shots in “exceptional situations” and that it’s also fine to wait up to six weeks to get the second shot of either company’s two-dose immunization. While Pfizer’s and Moderna’s vaccines, which both use messenger RNA technology, were authorized to be given 21 and 28 days apart, respectively, the agency now says you can receive either shot so long as they are given at least 28 days apart, according to new guidance posted Thursday on its website. Although “every effort” should be made to ensure a patient receives the same vaccine, in rare situations “any available mRNA COVID-19 vaccine may be administered at a minimum interval of 28 days between doses” — if supplies are limited or the patient doesn’t know which vaccine they originally received, the CDC’s new guidance says. The agency says the two products are not interchangeable, and acknowledged that it hadn’t yet studied whether its new recommendations would change the safety or effectiveness of either vaccine. But vaccine research specialists who spoke with CNBC said that the two immunizations are so similar in design that people shouldn’t be worried about the rare instances in which the doses will be mixed. 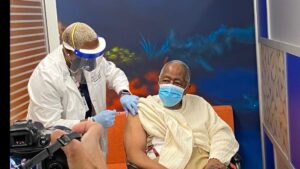 Health experts urge confidence in vaccine after superstar’s death When Hank Aaron and other African American leaders invited reporters to watch them receive COVID-19 immunization shots on Jan. 5, the baseball legend said he did so to help spread the word to millions that the vaccine is safe. “It felt good,” Aaron said afterward at the Morehouse School of Medicine, where the event was held. Now, just over two weeks later, public health experts and some of the Black leaders with Aaron that day worry that an event that drew so much publicity could inadvertently serve to undermine confidence in the vaccine. Within minutes of news breaking Friday morning of the baseball great’s death, those with doubts about the vaccine turned to social media to try to draw a connection to Aaron’s recent immunization. That worries Joe Beasley, one of the activists who received the Moderna vaccine shot alongside Aaron. “I hope this won’t have a chilling effect on our people,” said Beasley, 84. “We can’t afford it because too many people are dying (from COVID-19).” A cause of death was not announced, but the Braves said Aaron died peacefully in his sleep. 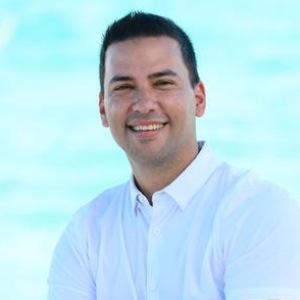 A former sugar addict turned health machine, Dr. Gioffre knows firsthand what it takes to overcome adversity and challenges to your health. His specialty is uncovering the root causes of inflammation and chronic illness, using a comprehensive, yet simple, seven-step plan to make healthy changes more convenient and sustainable. His approach is one of moderation, not deprivation, and uses cutting-edge nutrition to help you achieve and maintain an optimal level of health and energy. The founder of the Gioffre Chiropractic Wellness Center and Alkamind, he is a board-certified chiropractor in the state of New York (17 years). He is a passionate speaker and educator, certified raw food chef, live blood microscopist, Reiki master, and ultra-marathoner. He is also the author of GET OFF YOUR ACID – 7 Steps in 7 Days to Lose Weight, Fight Inflammation, and Reclaim Your Health & Energy (2018). He lives in New York City with his wife Chelsea, and his two children, Brayden and Alea. 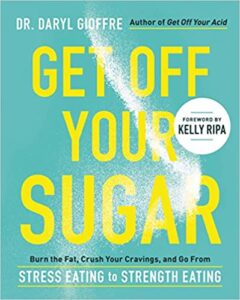 Get Off Your Sugar: Burn the Fat, Crush Your Cravings, and Go From Stress Eating to Strength Eating

In his first book, Dr. Daryl Gioffre taught us how to fight inflammation by getting off unhealthy, highly acidic foods. Now, he’s targeted sugar—because when you break your sugar addiction, you cut out a major contributor to inflammation, brain fog, aging, and chronic disease. You’ll go from stress eating to strength eating with Dr. Gioffre’s life-changing plan:

With tips for customizing the plan, including using clean keto and intermittent fasting to tune up your metabolism, and sixty-five craving-stopping recipes, Get Off Your Sugar is your guide to turning your body into a strength-eating, energy-filled, acid-kicking machine. 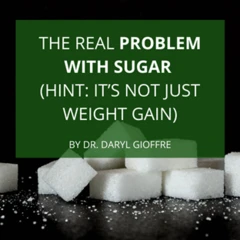 The Real Problem With Sugar (Hint: It’s Not Just Weight Gain) Can you believe that more than 50% of Americans consume a half pound of sugar per day—and a whopping 170 pounds of sugar per year? That amount has DOUBLED since 1900, to the point where truly, sugar is now America’s drug of choice. And there’s a good reason why. Even if you think you don’t eat much sugar, you may be surprised to find out that more than 80% of the packaged foods at the grocery store come with hidden sources of sugar. This includes foods like bread, sauces, store-bought green juices, supposed health and organic foods, and even chewable vitamins. And yes, all of that sugar is packing the pounds on Americans. The average adult male and female are both about 25 pounds heavier today than they were in 1960. But beyond weight gain, increased sugar consumption is literally making us sick – both with serious diseases like heart disease and diabetes and illnesses like the common cold. The science behind why that is and what you can do about it is what we’re talking about today. Sugar and grain consumption is at a high in the history of the human species. When people are eating high levels of sugar and carbohydrates day in and day out, the result is constantly elevated blood glucose levels.

Hello Robert, my mother-in-law is on dialysis. Her doctor gave her antibiotics because she has an infection where the port is located in her abdomen. She says she finished them and still has pain and yucky smell. Would Sovereign silver help? If so how much should she take. She’s 89 lbs. I also have first aid gel. Thank you!
I have one more question, what vitamins and minerals would you recommend during pregnancy? Thank you for your help.
Yolanda

Hi Robert.
I met you last year or so ago at Redmond store up in Salt Lake City where you were teaching a class. My son was there with me and met you also. He had been a missionary for the LDS church serving in Germany who was referred to teach Hagen Th—s by your friend Paul B. Anyway I have been a fan of yours for a long time and was wondering if you could check this out. I have looked into it and do believe through my training and other medical contacts that the Covid Vaccines are NOT really vaccines at all. I would appreciate your thoughts on this. https://cantcensortruth.com/watch?id=60076fda8c03b74ce0e2f6f5
Thank you
Cheri