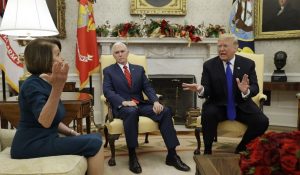 Trump clashes with Pelosi, Schumer at White House, threatens shutdown: ‘The wall will get built’ President Trump told Democratic leaders Tuesday he would be “proud” to shut down the government if he doesn’t get the $5 billion in border wall funding he’s demanding in a year-end spending bill. Rep. Nancy Pelosi, the likely next House speaker, and Sen. Charles E. Schumer, Democrats’ leader in the upper chamber, implored Mr. Trump to take the conversation away from the reporters he’d invited into the Oval Office to observe the meeting. But the president kept answering questions and sparring with the two Democrats — though he said it was constructive. “It is not an easy situation,” Mr. Trump said in the meeting, also attended by Vice President Mike Pence. “We are on very opposite sides. I would not like to see a government closing, a shutdown.” Moments later said he would embrace such a shutdown if it comes to that. “Yes, if we don’t get what we want, one way or the other,” he said, telling Mr. Schumer he would be “proud to shut down the government for border security.” 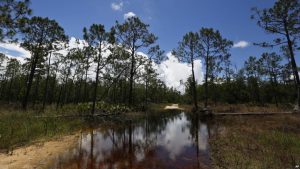 New Water Rules Mark Latest Trump Rollback on Environmental Regulations A new proposal from the Trump White House would roll back more Obama-era environmental regulations. Trump administration officials say Tuesday’s proposed change in the Clean Water Act provides “a clear, understandable, and implementable definition” of what kinds of bodies of water the government can regulate. Environmental groups say the new rules are a concession to industry and will pollute the nation’s already polluted waterways. During the Obama era, what constituted “Waters of the United States” was expanded under the Clean Water Act to include all kinds of wetlands from ditches that only contain water part of the year, to wetlands adjacent to larger rivers or lakes. The definition was created to help ensure that America’s water was kept clean at the source, with the assumption being that it was necessary to regulate creeks, ditches and wetlands because they eventually flow into bigger bodies of water. 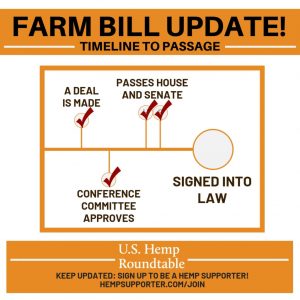 FARM BILL UPDATE: HOUSE PASSAGE! Minutes ago, the U.S. House of Representatives passed the 2018 Farm Bill by a vote of 369 to 47. There’s only one more step to permanent legalization – the President’s signature – and he has already indicated support of the measure.  As soon as he applies his pen to paper, the law takes immediate effect. We expect some sort of ceremonial bill signing imminently, and we will keep you informed. In the meantime, check out our General Counsel Jonathan Miller’s expert summary on what the Farm Bill does and means for the hemp industry. 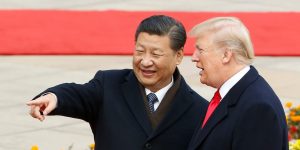 China looks like it’s going to give Trump a huge symbolic trade war win, fueling hope for a big deal The Chinese government is reportedly going to put on ice its well-publicized, controversial plan for economic dominance, in a move that could hand President Donald Trump a big, if symbolic, trade war victory. According to the Wall Street Journal, Beijing is preparing to replace its Made in China 2025 plan with a new economic blueprint that would aim for increased access to China for foreign companies. Made in China 2025 drew the ire of Trump and many other US officials because of its focus on making China the dominant player in emerging fields of technology and manufacturing, as well as its support for domestic firms with subsidies. According to the Journal, the new plan would place a greater emphasis on making the Chinese market open to all companies, including foreign firms, and would level the playing field for state-owned, private, and foreign firms. 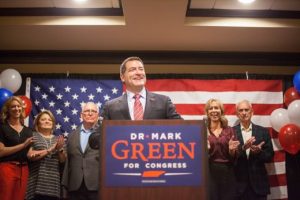 Tennessee U.S. Rep.-elect Mark Green alleges vaccines may cause autism, questions CDC data A soon-to-be congressman from Tennessee told constituents Tuesday he believed vaccines may be causing autism, questioning data from the Centers for Disease Control and other institutions disproving such a theory. Not only did Republican Mark Green, a Congressman-elect from Clarksville who is also a medical doctor, express hesitation about the CDC’s stance on vaccines, he also said he believed the federal health agency has “fraudulently managed” the data. His remarks came in response to an audience question at a town hall meeting in Franklin from a woman identifying herself as the parent of a young adult with autism. The woman was concerned about possible cuts to Medicaid funding. “Let me say this about autism,” Green said. “I have committed to people in my community, up in Montgomery County, to stand on the CDC’s desk and get the real data on vaccines. Because there is some concern that the rise in autism is the result of the preservatives that are in our vaccines. 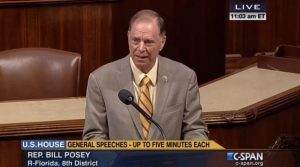 CDC Whistleblower Case To Resurface In 2019? Representative-elect Mark Green (R) (Tennessee) (twitter) pledges to investigate claims that the CDC is fraudulently managing the vaccine-damage data they collect. This story is a developing. In light of this development, I am re-posting this article of mine from July 2015. July 2015 was seemingly the last time a Congressman took a stance on this issue — and did so on the House floor — in order to get claims of fraud into the Congressional record. Let’s take a walk down memory lane… On July 29, 2015, US Congressman Bill Posey made his last stand on the floor of the House. Granted five minutes to speak, he laid bare the lying of the CDC in a now-famous 2004 study that exonerated the MMR vaccine and claimed it had no connection to autism. “No connection to autism” was the lie. Congressman Posey read a statement from long-time CDC researcher William Thompson, one of the authors of the 2004 Pediatrics study designed to determine, once and for all, whether the Measles-Mumps-Rubella vaccine could cause autism.

Researchers test effectiveness of anti-opioid vaccine Virginia Commonwealth University researchers are testing a vaccine against opioid abuse developed by the Scripps Research Institute in California. The vaccine is meant to block the effects of heroin and fentanyl in patients with opioid use disorder. The methodology of VCU’s preclinical tests was recently featured in the journal Trends in Pharmacological Sciences. Lead author Matthew Banks, Pharm.D., Ph.D., associate professor in the Department of Pharmacology and Toxicology in the VCU School of Medicine, also explains the workings of the vaccine, and reviews the landscape of opioid immunotherapy research and hurdles to vaccine development. The article is part of the journal’s “Science & Society” series, which highlights pharmacological research efforts to combat the opioid crisis in language accessible to lay readers. Banks is currently in the process of submitting test results for peer review. Researchers at the Minneapolis Medical Research Foundation and at Walter Reed Army Institute of Research are testing other anti-heroin and anti-oxycodone vaccines, Banks said. 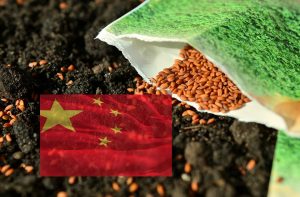 China Set to Shock Markets with Low Glyphosate Residue Limits in Food Imports China is set to introduce maximum residue limits (MRLs) of 200 parts per billion (ppb) or lower for glyphosate in all imported final food products and raw materials including grains, soybeans and other legumes before the end of 2019, according to Sustainable Pulse sources. The Chinese introduction of low MRLs, which are officially based on health concerns following the classification of glyphosate as a probable human carcinogen in 2015 by the International Agency for Research on Cancer, has been expected by both U.S. and Australian farming organizations for some time. China’s action would likely decrease the global use of glyphosate as a desiccant. The practice, known as desiccating, pre-harvest spraying or crop topping, is favored by many ‘conventional’ farmers as a way to hasten the even ripening of grains, such as wheat, oats and barley, as well as legumes and other crops such as sunflowers and potatoes, even though it is not a recommended use of the increasingly controversial weedkiller. Desiccation leads to higher levels of the herbicide in harvested crops and final food products. 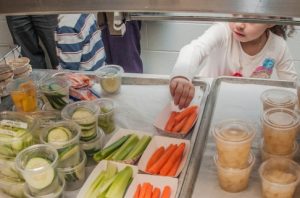 New Report: Toxic Weed Killer on The Menu in K-12 Schools Across the Country A new report by the Center for Environmental Health (CEH) found high levels of the toxic weed killer glyphosate in over 70 percent of the oat-based breakfast foods commonly served in K-12 schools across the country. Glyphosate, the active ingredient in Monsanto’s Roundup, the world’s most widely used herbicide, is applied on farms that grow corn, soybeans, oats, and hundreds of other crops. From there, it can make its way into our food, especially popular breakfast cereals and nutrition bars. CEH tested 13 popular breakfast foods served to school children. The report prioritized school districts with high rates of participation in the National School Breakfast Program since low-income children are already disproportionately exposed to toxic chemicals. Items containing the highest levels of glyphosate include Quaker Maple, Brown Sugar Instant Oatmeal, and Quaker Old-Fashioned Oats. CEH did not find glyphosate residues in any of the certified organic cereals tested.

Twitter Is Arguing over What to Call That Terrible End-Piece of Bread The end of a loaf of bread is the heel. It was always the heel, is the heel, and will always be the heel. And also it sucks. 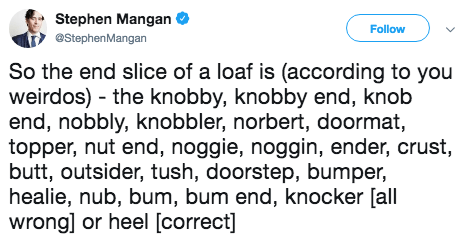