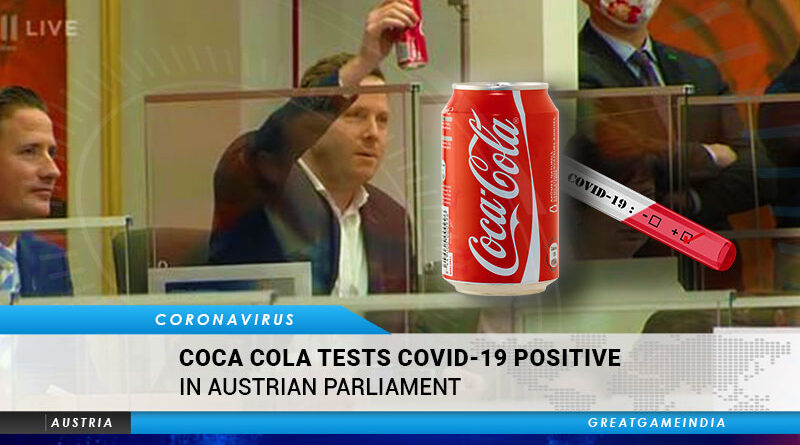 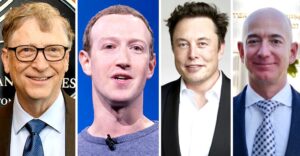 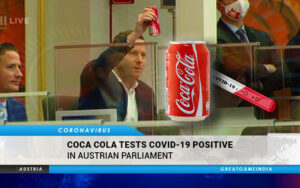 Coca Cola Tests COVID-19 Positive In Austrian Parliament An Austrian parliamentary member exposed the defectiveness of the government’s COVID-19 tests by demonstrating in the parliament how a glass of Coca Cola tested positive for COVID-19. In footage from the meeting in Vienna Friday, FPO General Secretary Michael Schnedlitz brings a glass of Coca Cola to the podium, from which he proceeds to collect drops to use on an antigen rapid test being used on a mass scale. After going to the lectern and starting his speech, the politician sprinkled few drops of cola on corona rapid test. Three minutes later the test showed a result: Coca Cola was COVID-19 positive. After demonstrating a positive result, Schnedlitz goes on to slam the tests as a waste of taxpayer resources. “Mr. President, we are likely to have a problem now, we have a positive corona test in parliament, namely this cola triggered a positive corona test. I don’t know how to deal with it now!With things like this you are throwing tens of millions of euros in tax money out of the window instead of providing real protection for old people’s and nursing homes, instead of investing money in our hospitals.The corona mass tests are worthless! This was also shown by a simple experiment in parliament, in which a cola had a positive result! But this black-green government spends tens of millions in tax money on precisely these tests.”

Hello Robert and Super Don, have you heard of Diatomaceous Earth? I saw it at the health store. It says it has a strong negative charge and as it goes through digestive tract it attracts and captures bacteria, fungi, pesticides, viruses, heavy metals etc, and passes the toxins out of the body? Is this what sovereign silver protocol does? Thank you, both for your show.
Yolanda

Have you noticed the miracle going on in America? Seems that almost ALL diseases like the FLU have suddenly disappeared…..the only thing anyone is getting ill from these days is COVID?? Really??…..and the 300,000 deaths? How many of that number are COVID RELATED, as opposed to dying DIRECTLY from Covid? Close to 70 -75 thousand – which-by the way is approx. 10% higher than the number of ppl. who die annually from the FLU….
THIS IS NOT A PANDEMIC….we are being lied to…look at the CDC website and the plans they have….and Faucci wants me to TRUST him? Right……………
Joseph the Carpenter 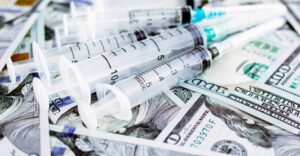 Vaccines must prevent infection, progression and transmission—in every country—to truly bring COVID-19 under control An editorial co-authored by a member of the UK’s influential SAGE committee that advises the UK Government on COVID-19, and published in Anaesthesia (a journal of the Association of Anaesthetists) says that in order for the global COVID-19 vaccination program to be successful, the available vaccines must be able to do all three of: prevent infection becoming established in an individual, prevent disease progression and prevent onward transmission. “Whether all three of these goals will be met by ‘first generation’ vaccines is not known, but is vital to the long-term success of the program,” explain co-authors Prof Sir Jeremy Farrar, Scientific Advisory Group for Emergencies (SAGE) and director of the Wellcome Trust, London, UK, and Prof Tim Cook, Consultant in Anaesthesia and Intensive Care Medicine, Royal United Hospitals Bath NHS Foundation Trust, Bath, UK and Honorary Professor, School of Medicine, University of Bristol, UK. “Preventing onward transmission—referred to as ‘sterilising immunity’ is particularly important as it is epidemic modifying. “It is possible that the first vaccines, including those being released now, may be more effective in preventing disease progression and hospitalisation and less effective in preventing transmission. Knowledge of their performance in pre-approval trials and in surveillance trials after licensure will enable further modifications such that improved second and third generation vaccines may be available later in 2021 and beyond.” 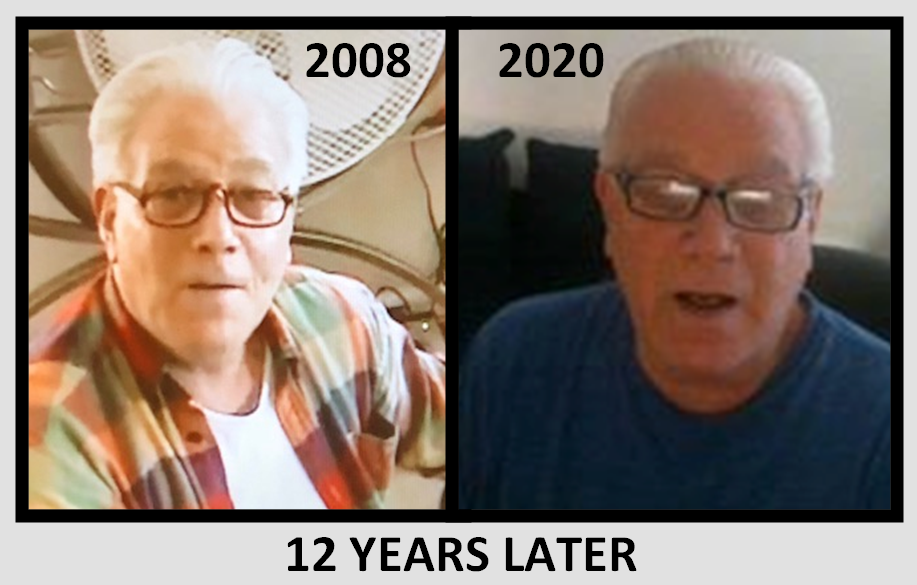 My name is Mel Friedman and I live in Reno, Nevada. Unfortunately, I contracted Morgellons in the summer of 2005. If you will be patient and read the story that is about to unfold, you may join me as one of the many people who have won the battle with the dreaded Morgellons. This story is my gift to the world of how I went about winning my battle with the Morgellons scourge.
Here’s my story:  I have acquired a small amount of knowledge about the human body, and that’s because in 1979 I was run over by a car and spent almost a year in three different hospitals, had four operations, and was told that I would never walk again.  It took many years to teach myself how to walk again, but I made good use of the time during my recovery by studying the human body and the role of nutrition in supporting or harming it. I was actually doing very well until the spring of 2005. My health was OK but not great. It had been a tough winter, and walking was becoming more difficult as it took more energy just to get around. I had constant hip pain, and so I decided that it was getting close to the right time to retire from my partnership in my service business. I had planned to retire on July 30th, 2005 – it was going to be my last day at work. On May 25th I was bitten by a black widow spider – at least that was the conclusion of the doctors who treated me. Because of the bite, I became very ill and could hardly go to my business for the last three weeks prior to retiring. After being treated I slowly started to feel better, and in late August of 2005 I decided to join a gym to regain my strength, strengthen my bad leg, and recapture good health. I was looking forward to getting back into shape, feeling stronger, losing some weight, and regaining my energy. 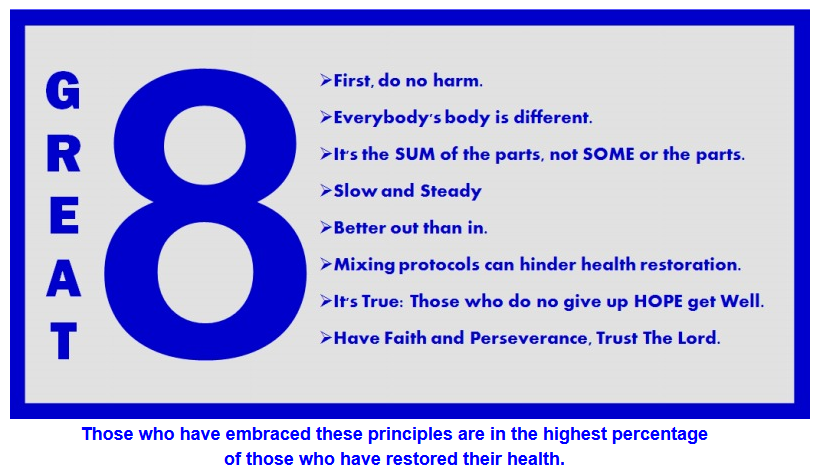 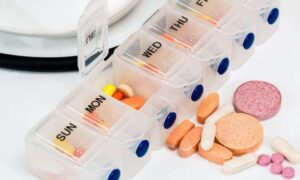 New alliance seeks to fight ‘plague’ of fake medicines COVID-19 has spawned a “stark rise” in the global circulation of fake medical products relating to the pandemic, experts warn as they launch an alliance aimed at tackling the scourge. The Fight the Fakes (FTF) Alliance, a non-profit association comprising 16 organizations from manufacturers to wholesalers, and research and patient groups, aims to raise the profile of an issue it views as long under-addressed globally, with a disproportionate impact on low- and middle-income countries. One in 10 medical products in developing countries is either substandard or falsified, according to World Health Organization (WHO) figures from 2017. And some research suggests the prevalence of fake medicines can be as high as 70 percent in some African countries. Fight the Fakes began seven years ago as a grassroots advocacy campaign, but Adam Aspinall, chairman of the new association, says forming a formal non-profit alliance takes things to the next level—potentially helping establish closer ties with the WHO and attracting a broader membership. “It gives us a lot more clout when it comes to raising the message,” he says.